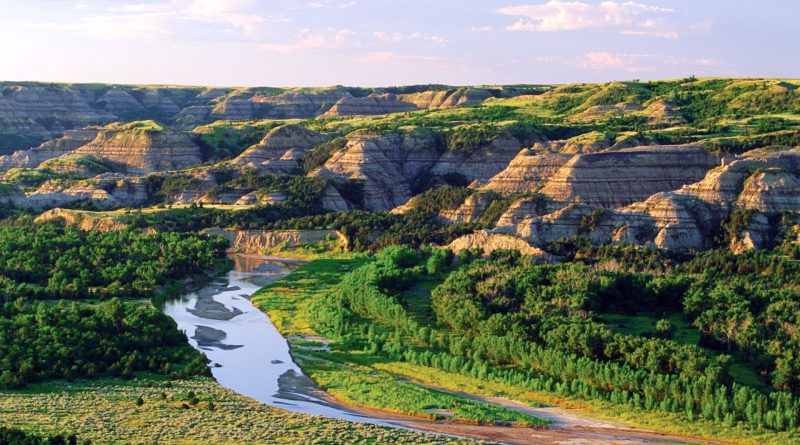 Geography –
Within Theodore Roosevelt National Park, the South Unit is the largest section and extends alongside Interstate 94 near the city of Medora (North Dakota). The smallest section is the North Unit and is located 130km north of the South Unit on the U.S. Highway 85, south of Watford City (North Dakota). Roosevelt’s Elkhorn Ranch is located between the North Unit and South Unit, approximately 20 miles west of Route 85 and Fairfield, North Dakota. The Little Missouri River flows through the three sections of the park. The Maah Daah Hey trail connects the three sections.
The North Unit, South Unit and Elkorn Ranch Unit cover a total of 28,508 Ha (285.08 km2).

Climate –
According to the Köppen climate classification system, Theodore Roosevelt National Park has a cold semi-arid climate (BSk). According to the United States Department of Agriculture, the plant hardiness zone at the North Unit Visitor Center (612m) is 3b with an average annual minimum temperature of -34.8 ° C and 4a with an average annual extreme minimum temperature of -34.1 ° C at the South Unit Visitor Center (689 m). 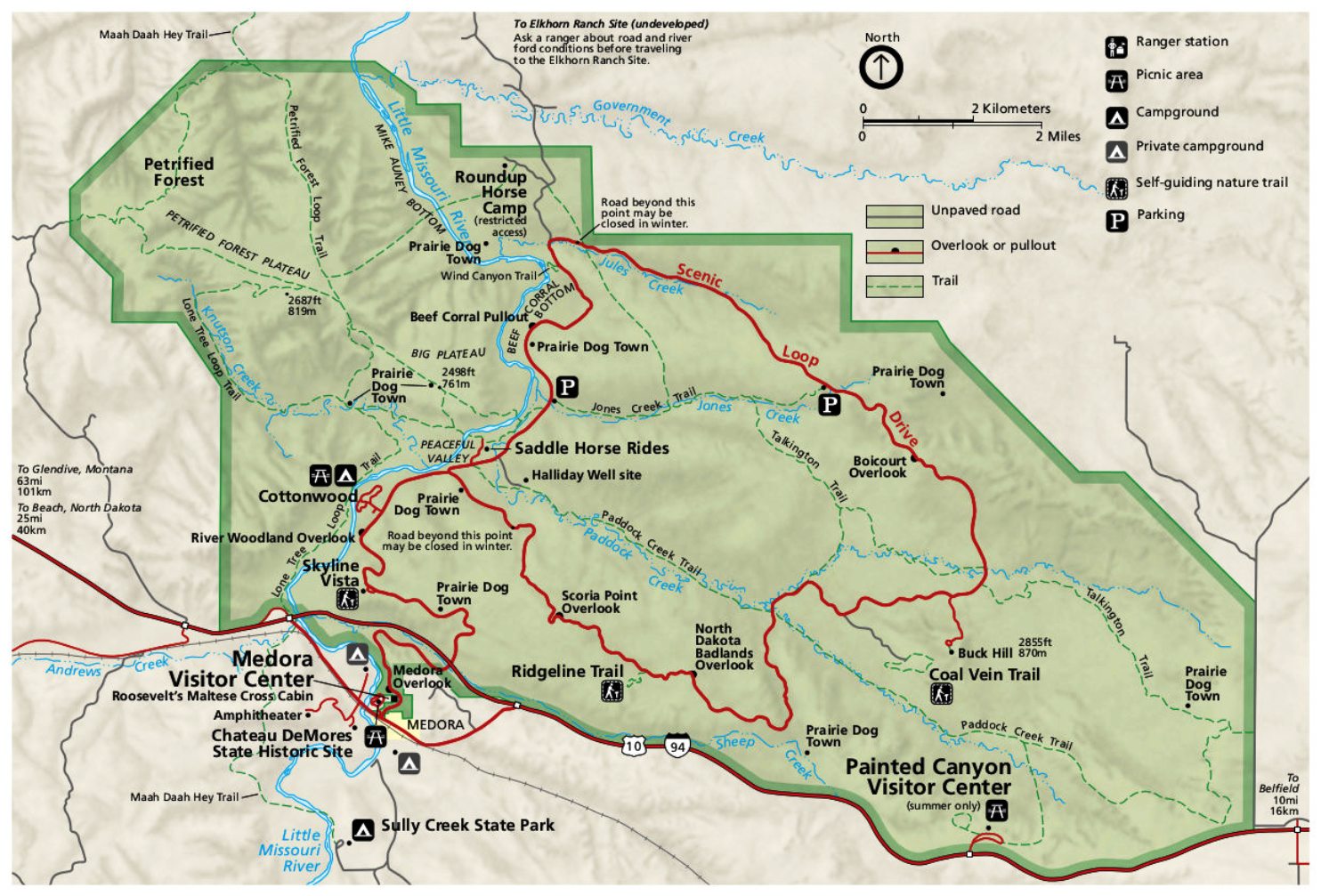 Flora –
The topography of the badlands in Theodore Roosevelt National Park offers surprising diversity for plant life. From the sunny and arid southern hillsides to their wooded and cooler north slopes, from floodplains to grasslands, over 400 plant species have been identified within the park. There are also 500 species of plants.
In Theodore Roosevelt National Park, the pasqueflower is the first to bloom in April, heralding the arrival of spring. Soon after, from May to September, a wide range of flowers appears on the landscape. Many flowers bloom in June and July, the peak months for flower viewing. Some flowers, such as sunflowers, asters and the rabbit brush, survive through the late summer months of August and September. In late September, when the seasons begin to change, the leaves of the poplar take on a bright golden color before falling to the ground.
The wide range of plant life supports a generous population of wildlife in the park.
Large grazing mammals including bison, pronghorn and wild horses are often found eating grasses. Deer and elk graze in the grasslands and graze the woodiest plants. Smaller mammals like cottontail rabbits, fewer squirrels, voles, and mice feed on the plants and berries and seeds the plants produce. Prairie dogs have a noticeable effect on plants near their cities, favoring the growth of fast-growing plants over other plants due to the rodent’s continual grazing.
A wide variety of birds benefit from the plants, their berries, their seeds and the insects that the plants support. Warblers eat insects attracted to flowering plants, a wide variety of sparrows and other birds eat the seeds, and birds including cedar wings and Townsend solitaires eat the berries.
The plants that provide food for many of the park’s animals need to be protected from overgrazing and from being overrun by non-native plants. To do this, park officials study the effects of animals on plant communities and initiate wildlife management actions when needed. Park officials also track and combat threats from non-native plants in order to protect the native ecosystem.
A native plant exhibit showing some of the park’s common plants can be found in front of the South Unit Visitor Center in Medora. A similar smaller exhibit is located outside the North Unit Visitor Center. Field guides for plant identification are available in the park’s bookstores.

Fauna –
A wide variety of Great Plains wildlife lives in this type of climate, including bison, coyote, pumas, mustang horses, badgers, moose, bighorn sheep, white-tailed deer, mule deer, pronghorn, prairie dog, and at least 186 bird species including golden eagles, grouse and wild turkeys. Bison, moose and bighorn sheep have been successfully reintroduced to the park.
For this reason Theodore Roosevelt National Park is home to a wide variety of animals.
Here the abundance of native grasses provides sustenance for both large and small grazing animals, while the presence of diverse habitats attracts large numbers of birds. The terrain of the gullies creates microclimates of warm and dry slopes, relatively cool and moist juniper forests and river bottoms.
There are amphibians, albeit few, that manage to survive in the harsh climate of North Dakota.
More than 186 types can be found among the birds that live in or pass through Theodore Roosevelt National Park.
Mammals include large grazing animals including bison, wild horses, moose, white-tailed deer and mules, pronghorns and small grazers such as prairie dogs that share the park’s diversity.
Finally the reptiles; there are several varieties of snakes and lizards that live in the semi-arid climate of western North Dakota.
The managing body strives to keep the population of some species balanced in order to maintain a healthy ecosystem.