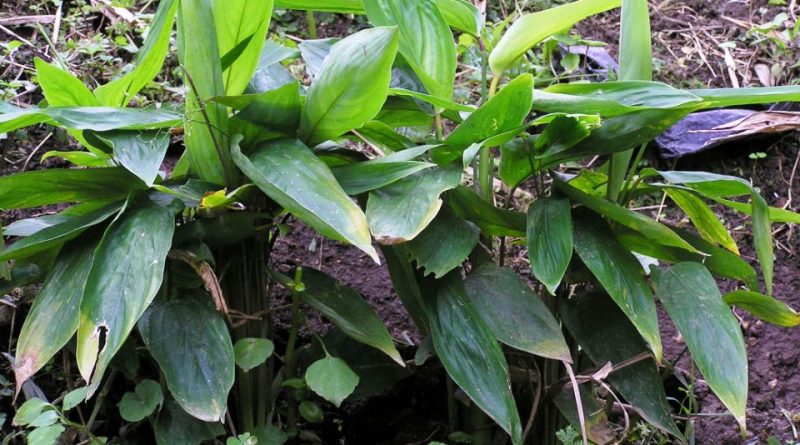 The Arrowroot (Maranta arundinacea L.) is a perennial herbaceous species belonging to the Marantaceae family.

Etymology –
The term Maranta of the genus was dedicated by Linnaeus to Bartolomeo Maranta (~ 1500-1571), an Italian physician and botanist, active mainly in the Botanical Garden of Naples.
The specific arundinacea epithet comes from arúndo, -dinis reeds and rushes in general: similar to a reed. 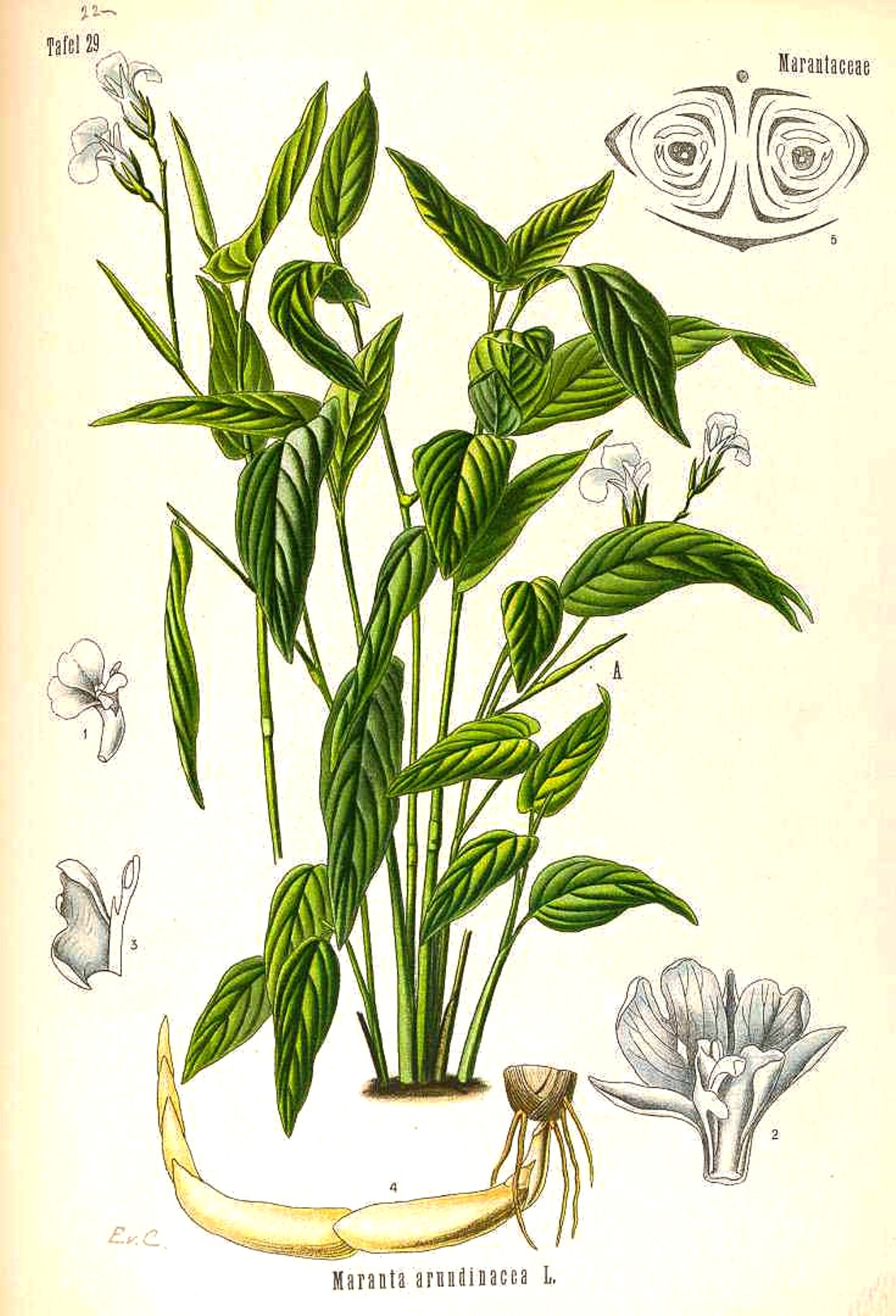 Description –
Maranta arundinacea is a perennial plant that grows to a height between 0.3 m and 1.5 m whose edible part is the rhizome. The rhizomes are fleshy, cylindrical and grow from 20cm to 45cm in length.
It has large, lanceolate leaves.
The small, white flowers are gathered in clusters and bloom about 90 days after sowing.
The plant rarely produces seeds, and reproduction typically occurs by planting part of a rhizome with a bud.

Cultivation –
Maranta arundinacea probably originated in the Amazon rainforest of northwestern Brazil and neighboring countries.
This plant grows best between temperatures of 23 ° C and 29 ° C, with annual rainfall between 150 cm and 200 cm. The dormant rhizomes can withstand temperatures up to 5 ° C.
Furthermore, the rhizomes are ready for harvesting 10-12 months after sowing, when the leaves of the plant begin to wither and die.
This plant is also grown for ornamental purposes in some areas of the United States and other countries.
As for the production for obtaining rhizomes, it is the Caribbean island area of ​​St. Vincent and the Grenadines where the largest cultivation in the world takes place.
In Kerala, India, this plant, locally called bilathi koova, is grown to produce an easily digestible starch.
This plant is also harvested in its natural state, as well as being widely cultivated in tropical regions.
For its cultivation it is necessary to choose a fertile, humid and well drained soil in a sunny or partially shaded position and with a pH in the range 5.5 – 6.5, tolerating 5 – 8; for a better development of its rhizomes it is preferable to choose loose soils which, among other things, facilitate harvesting.
This plant is returned to the same plot for 5 – 6 years and the yields can be included within 5 – 6 years between 10 – 35 tons per hectare of rhizomes, from which 2.5 – 7.5 tons of starch can be obtained.
The plant can be propagated by seed or by division of tufts.

Customs and Traditions –
Maranta arundinacea was one of the first food plants to be domesticated in northern South America, with evidence of exploitation or cultivation of the plant dating back to 8200 BC.
This data is confirmed by radiocarbon dating. This plant, together with Calathea allouia, Cucurbita moschata and Lagenaria siceraria became plants cultivated in the north of South America and in Panama between 8200 BC and 5600 BC.
Some archaeologists believe that Maranta arundinacea was first used by Native Americans not as food but as a poultice to extract poison from wounds caused by spears or arrows.
Evidence of food as his (dating back to 8200 BC) was found at the archaeological site of San Isidro in the upper valley of the Cauca River in Colombia, near the city of Popayán. The starch grains of this plant were found on grinding tools. It is unclear whether the plant was only harvested or cultivated, although the site’s elevation of 1,700 meters is likely outside the normal elevation range at which M. arundinacea grows in the wild. Therefore, the plant may have been introduced to San Isidro from nearby lowland rainforest areas in an early pioneering cultivation.
In addition, stone hoes have been found for growing plants dating back to 7700 BC. in the middle Cauca valley, 150 kilometers north of San Isidro.
The domestication of this plant in this early period was probably on a small scale, with a system of cultivation on steps and gardens of a few plants planted in alluvial soils near waterways to ensure the constant supply of moisture necessary during the growing season.
The exploitation of Maranta arundinacea was probably complicated by the difficulty in extracting starch from the fibrous roots. The roots must first be pounded or ground and then soaked in water to separate the starch from the fibers. Starch is great for digestibility.
Nowadays, the starch of this plant is used in food and confectionery preparations and for industrial applications such as cosmetics and glues. The residue from starch extraction has a high fiber content and can be fed to livestock.
The edible uses of this plant concern the use of both raw and cooked roots. The rhizomes are a source, as mentioned, of a high quality edible starch, obtained by grinding the root into a fine powder; moreover, unlike flour, it does not add a floury taste.
Maranta arundinacea is also used in the medicinal field.
In fact, the rhizomes are easily digestible, they are beneficial to convalescents and to those with weak digestion, helping to relieve acidity, indigestion and colic. They are mildly laxative.
An infusion is obtained from the roots which has traditionally been used to treat urinary infections.
The root has also been used as an antidote for poison.
The powdered root has been used as an ointment or poultice, especially in combination with an antiseptic herb such as myrrh (Commiphora spp.).
Additionally, the powdered root has traditionally been made into a poultice for the treatment of smallpox sores.
Other uses include agroforestry as these plants can be grown as ground cover.
Finally, the starch obtained from the root is also used as a base for powders and in some types of glue.

Preparation Method –
Maranta arundinacea is a plant that has been used since ancient times for both food and medicinal purposes.
Among the edible uses of this plant there are those of using both raw and cooked roots.
With them, an infusion is obtained, traditionally used to treat urinary infections. In addition, the root has also been used as an antidote for poison.
The powdered root has been used as an ointment or poultice, especially in combination with an antiseptic herb such as myrrh (Commiphora spp.) And traditionally made into a poultice for the treatment of smallpox sores.