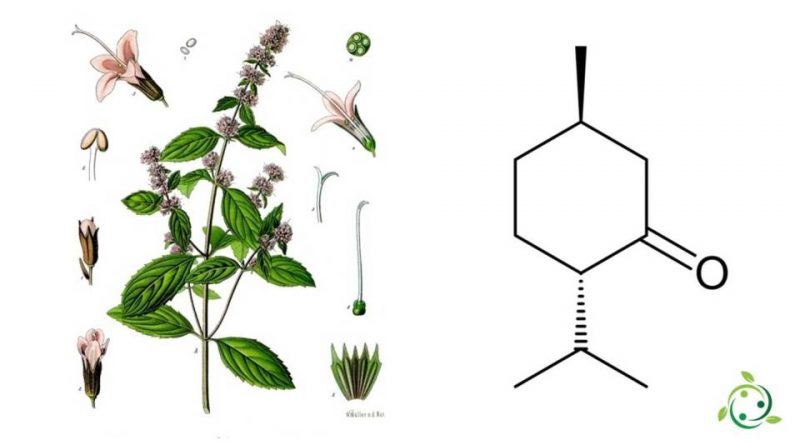 Menthone, whose term in the official IUPAC nomenclature is: (2S, 5R) -2-isopropyl-5-methylcyclohexanone is a monoterpene with a minty flavor that occurs naturally in a number of essential oils.
Menthone has a molecular formula: C10H18O and is structurally related to menthol, which has a secondary alcohol instead of carbonyl.
Menton is used in aromas, perfumes and cosmetics for its characteristic aromatic and mint smell.
In nature, menton is a constituent of the essential oils of mint, peppermint, Mentha arvensis, Pelargonium and other plants.
In most essential oils, it is a minor compound.
Menthone was first synthesized, from the oxidation of menthol, in 1881 before being found in essential oils in 1891.
Physically, menton has two asymmetric carbon centers, which means it can have four different stereoisomers: (2S, 5S), (2R, 5S), (2S, 5R) and (2R, 5R). The stereoisomers S, S and R, R have the methyl and isopropyl groups on the same side of the cyclohexane ring: the so-called cis conformation. These stereoisomers are called isomentons.

Trans isomers are called menton. Since the (2S, 5R) isomer has negative optical rotation, it is called l-menton or (-) – menton. It is the enantiomeric component of the (2R, 5S) isomer: (+) – or d-menton.
Menthone can be easily converted to isomental and vice versa via a reversible epimerization reaction via an enol intermediate, which changes the direction of the optical rotation, so that l-menton becomes d-isomental and d-menthone becomes l-isomental.
The laboratory synthesis of menton occurs through the oxidation of menthol with acidified dichromate.
If the oxidation of chromic acid is performed with stoichiometric oxidant in the presence of diethyl ether as a cosolvent, a method introduced by H.C. Brown, the epimerization of l-menthone to d-isomental is largely avoided. If menthone and isomenthone are balanced at room temperature, the isomental content will reach 29%. Pure L-Menthone has a clean, intense mint aroma. Conversely, d-isomenthone has a “green” note, the increasing levels of which are perceived to detract from the quality of the l-menthone odor.