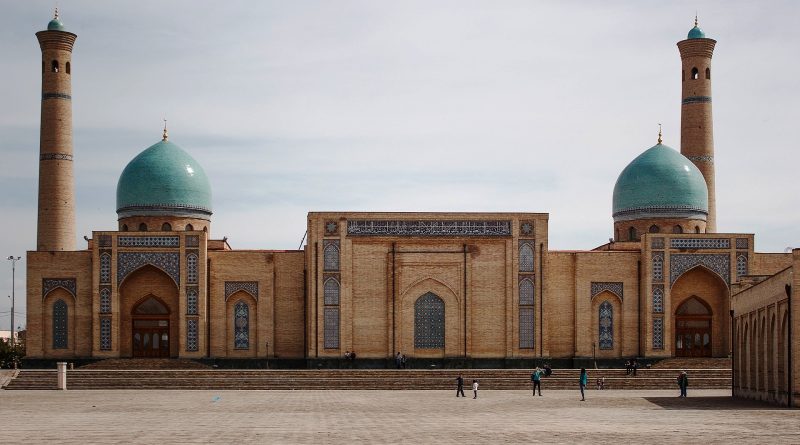 Uzbekistan is a Central Asian state, formerly part of the Soviet Union.
Uzbekistan has a population of 27,444,702 (2012) and its capital is Tashkent, which has over 2,148,000 inhabitants.
This country borders to the north and west with Kazakhstan, to the east with Kyrgyzstan and Tajikistan, to the south with Afghanistan and Turkmenistan; together with Liechtenstein, it is doubly landlocked, that is, in addition to being landlocked, it borders on landlocked states as well.

Geography –
Uzbekistan extends for 1500 km from north-west to south-east, with an average width that does not exceed 300 km and extends from the western slopes of the Alaj massif (to the east), which frame the Fergana valley ( a sinking pit), up to the shores of the vast Aral Sea (to the west), a remnant of an ancient sea, only 53 m above sea level. In the territory there are two geomorphological and climatic zones.
The western part of Uzbekistan is dominated by the arid steppe of Kyzylkum (300,000 km², partly in Kazakhstan), which reaches up to the Aral. The Amu Darya, which marks the border with Turkmenistan for a long stretch, divides this semi-desert area, rich in natural gas fields, from the desert plateau of Karakumy (in Turkmen territory) and from the Ustjurt desert, which extends west of the Aral to the Caspian. The plains surrounding the Aral Sea belong to the Karakalpak Autonomous Republic. Throughout the western region the climate is dry continental, with minimum temperatures in January of -29 ° C and summer maximums of +45 ° C; rainfall is less than 100 mm per year.
In the eastern part we find the Zeravšan, Amu Darya and Syr Darya river basins which are separated by the extreme offshoots of the Tian Šan, Alaj and Pamir, young and highly seismic mountain ranges. The highest of these is that of the Gissar, where on the border with Tajikistan is the highest peak in the country, the Khazret Sultan (4643 m asl). Fergana, a tectonic basin 300 km long and 100 wide, bathed by the Syrdar’ja and its tributaries, where a significant part of the population is concentrated. The border with Tajikistan cuts through these chains and the valleys that separate them in a very complex way: the Fergana valley, for example, is separated from the capital Tashkent by Tajik territory. The control of waterways, essential for economic life, creates rivalry between the two countries. In the river valleys and on the mountain slopes, the continentality of the climate is attenuated and rainfall increases (from 300 mm per year in the plains to more than 1000 in the reliefs). 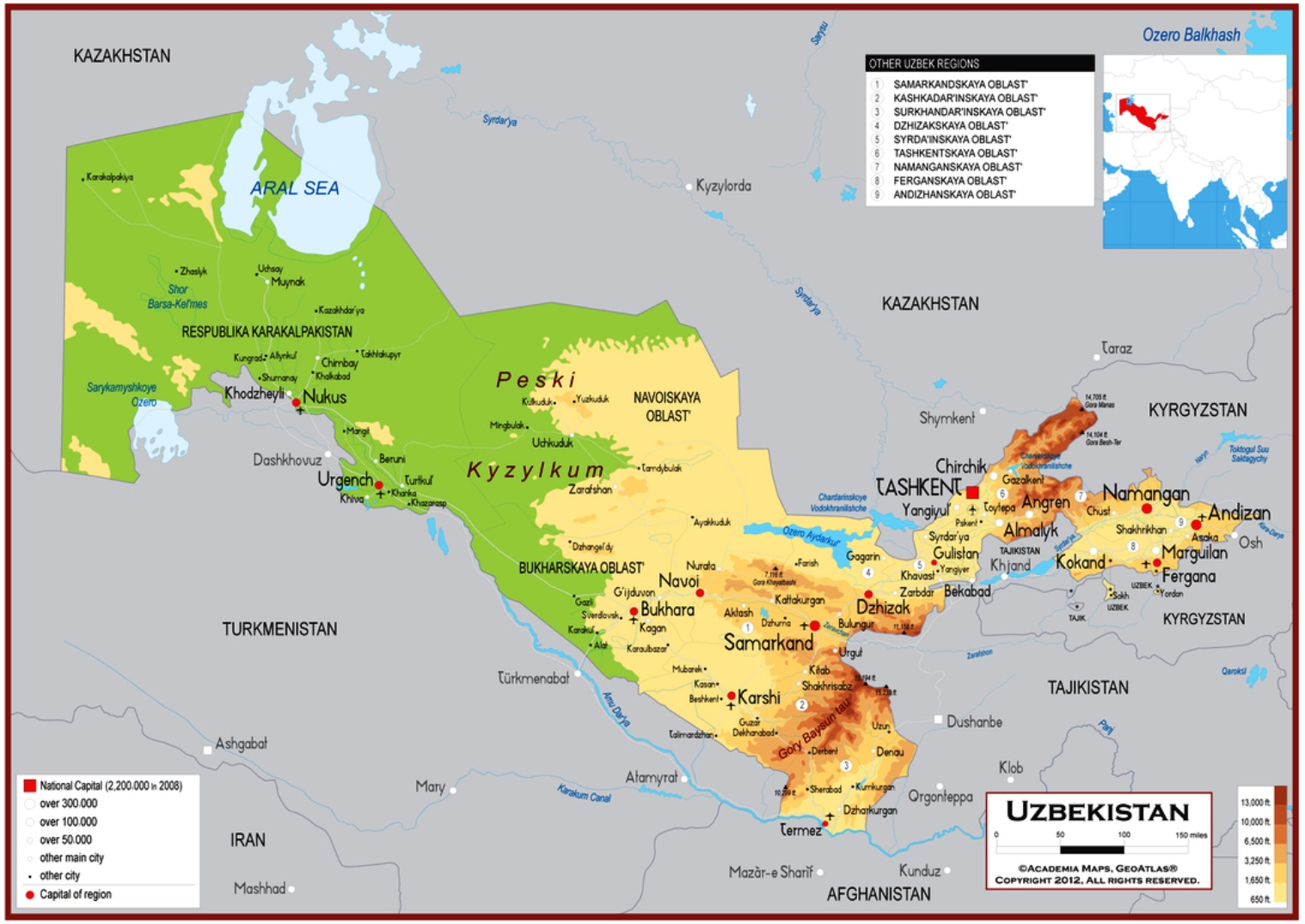 Climate –
In Uzbekistan the climate is arid continental in the vast central-western lowland steppes, while it remains continental but becomes moderately rainy (and snowy in winter) in the eastern hilly and mountainous areas.
Winter is cold, especially in the north: the average January temperature is around -5 ° C in the northernmost areas (the Aral Sea and the northern part of the Kyzyl Kum desert), while it is slightly above freezing in the central locations of the ancient silk road (Tashkent, Samarkand, Bukhara), and reaches up to 5 degrees above zero in the extreme south (see Termez). Summer is very hot: the average in July ranges from 26/27 ° C in the north to 30 ° C in the far south. In the mountains, of course, the temperature decreases with altitude. Uzbekistan is exposed to freezing air masses from Siberia, especially in the north-western part, but also in the center-south, where they alternate with milder air masses. Clashes of different air masses can cause strong winds, for example the hot wind blowing from the southwest, which can lead to dust storms.
Precipitation is at a desert and semi-desert level in the western part, and at a slightly higher level, steppe or semi-arid, in the central-eastern part. In the mountains, the level of precipitation increases, especially on the more exposed slopes. Summer is the driest and sunniest season everywhere.

Flora-
In Uzbekistan 4.6% of the territory is made up of protected areas.
Spontaneous vegetation in Uzbekistan largely varies depending on the altitude. The lowlands of the west have little plant cover of desert sedges and grasses. The higher eastern foothills are ideal for grass, and forests and scrub appear on the hills. Forests cover less than 12 percent of Uzbekistan’s land area.
In this country, more than two thirds of the territory is desert or has the grassy and bushy vegetation typical of the steppe. Part of the original chestnut woods is still present at medium-low altitudes; going up you meet spruce, larch and juniper. Elm and poplar are widespread along the banks of rivers, along with dense bushes called tugai.

Fauna –
Animal life in the deserts and plains of Uzbekistan includes rodents, foxes, wolves and the occasional gazelle and antelope. Wild boars, roe deer, bears, wolves, Siberian ibexes and some lynxes live in the high mountains.
In the steppes live, in addition to the Saiga tatarica, an antelope at risk of extinction, roe deer, wolves, foxes and badgers. Typical of the Kyzylkum desert is a giant lizard that can reach a length of 1.60 m; several rodents are also widespread. The delta environments are home to wild boar, jackal and red deer. The Caspian tiger is extinct: the last specimen of this subspecies was killed in the Amudarja delta in 1972. On the eastern hills it lives, together with the Siberian ibex, the lynx, the wolf, the wild boar and the brown bear, a another species threatened by man: the snow leopard, hunted for its fur. Several species of birds inhabit the steppes and reliefs, including the pheasant, grouse, partridge, hawk, eagle and vulture. Duck, goose and other migratory birds stop in the Ustjurt Plain.