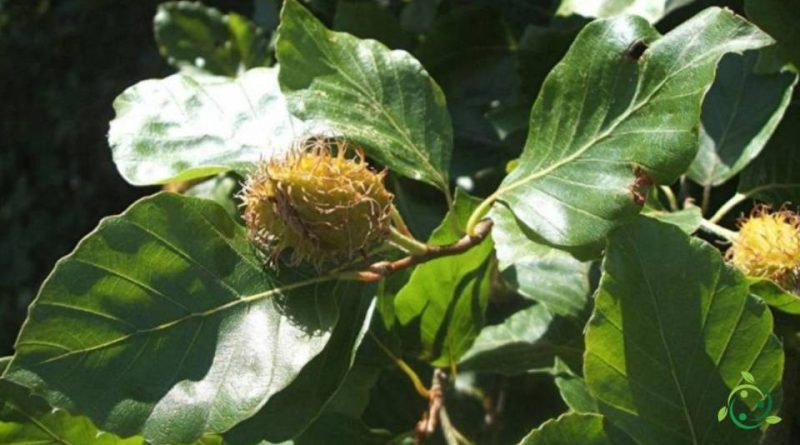 The beech (Fagus sylvatica L., 1753) is a tree of the Fagaceae family of European origin and present in the continent from southern Sweden to the mountains of Sicily and Great Britain to south-eastern Russia.
The reproductive structures of the beech are unisexual inflorescences: the male ones in hanging glomeruli each equipped with a long peduncle, the erect female ones consisting of 1-2 flowers surrounded by 4 broad upper bracts and numerous lower linear bracts.

Cultivation –
The cultivation of beech is possible in environments with abundant rainfall and high humidity.
This plant grows well in soils with good drainage and absence of water stagnation phenomena in the soil. Although it is a species that grows well in the mountains, it bears badly both intense cold and prolonged drought.
From the pedological point of view it is a plant that adapts to soils that are not very acidic and in the presence of humus and can grow on both carbonate and siliceous rocks; in difficult conditions, on the other hand, it prefers a carbonate-dolomitic substrate.
Furthermore, for its cultivation, areas with moderate ventilation but not excessively dry should be chosen. For this reason it should not be grown in deep valleys or even at the top of dry summits. The areas where the cultivation of beech is favored are those mountainous areas where clouds and fogs gather.
As far as multiplication is concerned, propagation by cleft grafting is often used, in the period of March or June by grafting by eye or by approximation.
In the management of a beech forest these are treated both in coppice and in high forest.
In fact, the coppice government is gradually being disused, with the consequent conversion to tall trees. Depending on the quality of the high forest, different types of cuts can be applied:
– occasional cuts for the poorest stands;
– successive cuts to groups for good populations with a different age structure;
– successive uniform cuts with turn of 100 – 120 years for populations in excellent condition in the same age structure.
The mass at the end of the shift of a beech forest can even reach 700 cubic meters per hectare.