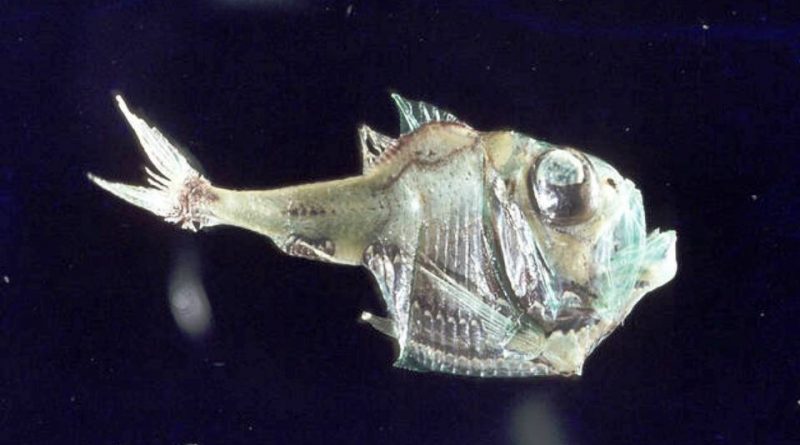 Geographic Distribution and Habitat –
The half-naked hatchetfish is a widespread fish in the Atlantic Ocean and in the Mediterranean Sea, including the Adriatic Sea.
In Italy it is present in all seas and in the Strait of Messina it is very often collected on the surface at night and sometimes it happens that beach in large numbers.
Its habitat is that of great depths, up to 3,000 m and has pelagic habits. Furthermore, during the night, it migrates to lower depths. 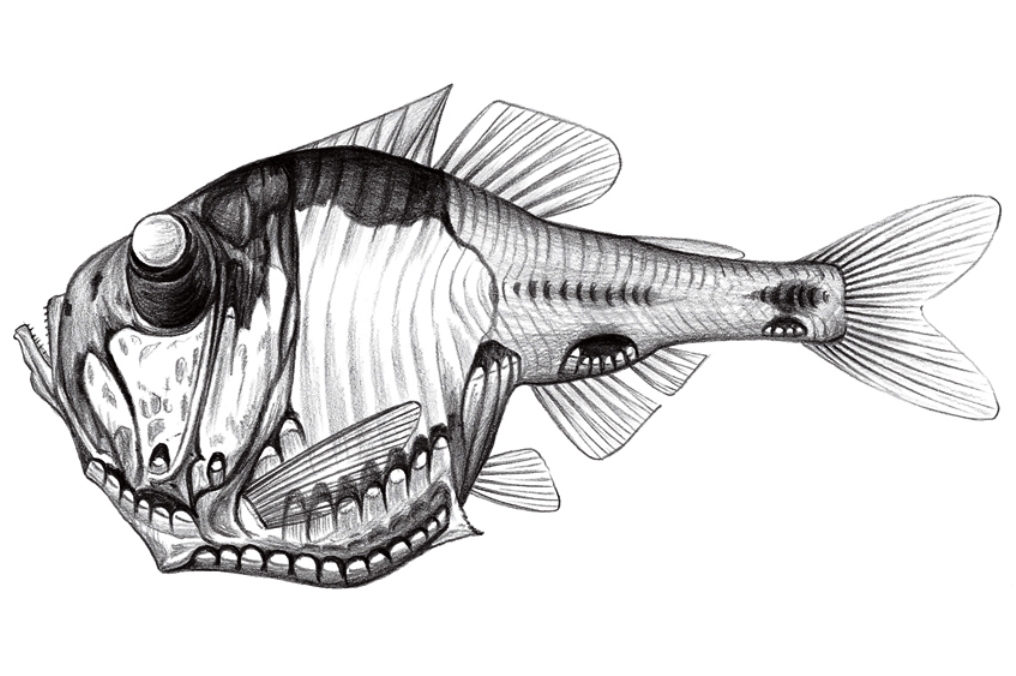 Description –
Argyropelecus hemigymnus is a fish with an absolutely unmistakable shape that measures up to 6 cm in length.
The body is very compressed, high in the front and thin in the back. The head is higher than long, with tubular eyes directed upwards and small nostrils.
The scales are difficult to observe, perhaps because they are extremely thin and transient. The photophores, present on each side of the body, are a total of fifty, of which on the head one anteorbital, one pre-opercular, two opercular and six branchiostegal.
It has a large, obliquely cut and almost vertical mouth and on the edges of both jaws there is a series of small, hook-shaped teeth. Other short series of teeth are found on the palatines.
At the corner of the pre-operculum there are two spines, one directed back and one obliquely down and back.
The dorsal fin (of 8-9 rays) is preceded by the bony lamina of the pterygophores (series of spiny bone rays). Posterior to the dorsal with soft rays there is a transparent adipose fin, low and long. The anal (11-12 rays) originates at the end of the dorsal. The caudal (19-10 + 10 + 9 + 5 rays) is quite broad and bilobed; the pectorals (10-11 rays) are long and go beyond the base of the ventral ones, which are reduced and with 6 rays.
When this fish is alive it is covered in the front part of the body and in the suborbital area by a very thin silvery film, which is easily removed.
During the day, the luminous organs shine more or less intensely with a red-winey light with a tendency to violet, which persists even for several days after the death of the animal. At night the brightness is replaced by a greenish phosphorescence, which disappears immediately with the death of the animal.

Biology –
Argyropelecus hemigymnus reaches sexual maturity when it has a length of about 22 mm and adult males have more developed olfactory organs than females, that is, the species is sexually dimorphic.
Sexual maturity lasts all year. In fact, it reproduces all year round, with a maximum in spring.
The eggs are floating and a larva hatches which assumes the typical appearance of the adult, with a size of about 7 mm in length.

Ecological Role –
The half-naked hatchetfish is a fish that feeds on zooplankton organisms, especially crustaceans and in particular on ostracods and copepods.
Like many other abyssal fish, this species can be found beached on some coasts such as in the Strait of Messina. These strandings made it possible in the 19th century to study the abyssal fauna when oceanographic expeditions were not yet possible.
According to the IUCN Red List, the species is rated as Least Concern (LC) due to its wide distribution and because there is no evidence of decline or specific threats.