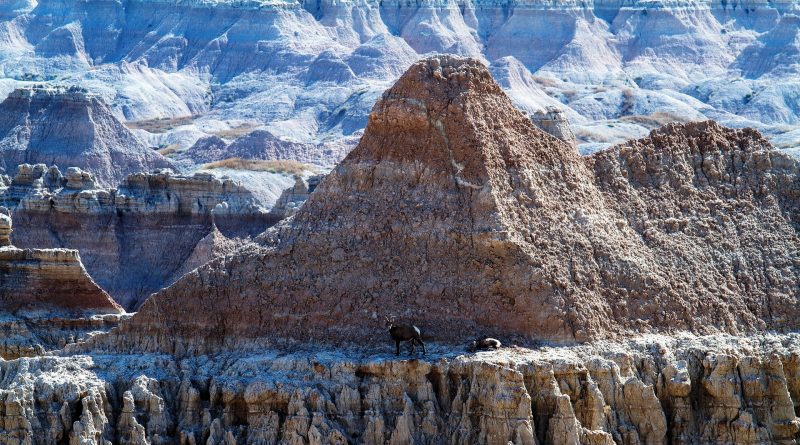 Badlands National Park, whose WDPA Code is: 4444406 is a US National Park located in the State of South Dakota.
This park covers an area of ​​982.40 km² and is managed by the National Park Service.
The protected area is known for its impressive gully formations, called mako sica (“bad lands”) by the natives.

Geography-
Badlands National Park is located in southwestern South Dakota, featuring heavily eroded pinnacles and spiers surrounded by a mixed grassland ecosystem. The mixed grass prairie is a transition zone between the tall grass prairie in the east and the short grass prairie in the west.
The park’s hillocks and spiers were formed through the geological processes of deposition and erosion. The rocks of Badlands National Park settled as early as 75 million years ago and only began to erode 500,000 years ago. As erosion continues today, the fossils buried in the rock slowly reveal themselves and the park’s paleontologists study them to learn about ancient life in the area.

Geology –
The Badlands National Park, as mentioned, is an area characterized by formations of badlands that were formed by erosion and deposition processes.
Deposition is the process of gradual formation of rocks. Over millions of years, the layered rocks of the Badlands have been slowly stacked on top of each other like a layer cake. These rocks have been deposited by a number of natural forces ranging from shallow inland seas to windswept rivers. Deposition began about 75 million years ago with the formation of the Pierre Shale, the base of the park’s geological formations. The deposition ended about 28 million years ago with the Sharps Formation, the tallest unit in the Badlands stratigraphy.
The Badlands began eroding around 500,000 years ago when the Cheyenne and White Rivers made their way through the landscape. These are the origin of the narrow channels, canyons and rugged peaks of the Badlands that we see today. And the Badlands are still eroding: Badlands are estimated to erode at the rate of one inch per year, which is a rapid rate for rocks. In contrast, the granite of the Black Hills, west of Badlands National Park, erodes at a rate of 2.5 cm every 10,000 years. Scientists estimate that the Badlands will be completely eroded over the next 500,000 years.
There are a number of rock types in the Badlands National Park.
The formations contain sandstones, siltstones, clays, limestone rocks, volcanic ash and shales. These types of rocks come from different sources. For example, many of the sandstones found in the Badlands are the remains of ancient river channels. The occasional limestone lens found in the park comes from calcium-rich groundwater that flows through ancient lakes and precipitates calcium carbonate, otherwise known as limestone.
The volcanic ash found in the Badlands comes from eruptions in the Great Basin, a geological province that includes states like Utah and Nevada. Most of this ash was transported to the area along with the eroded sediments from the Black Hills, making many of the rock layers a mixture of ash and sediment, often consisting of 50% ash and 50% eroded sediment. There is only a layer of pure volcanic ash in the park, called Rockyford Ash. 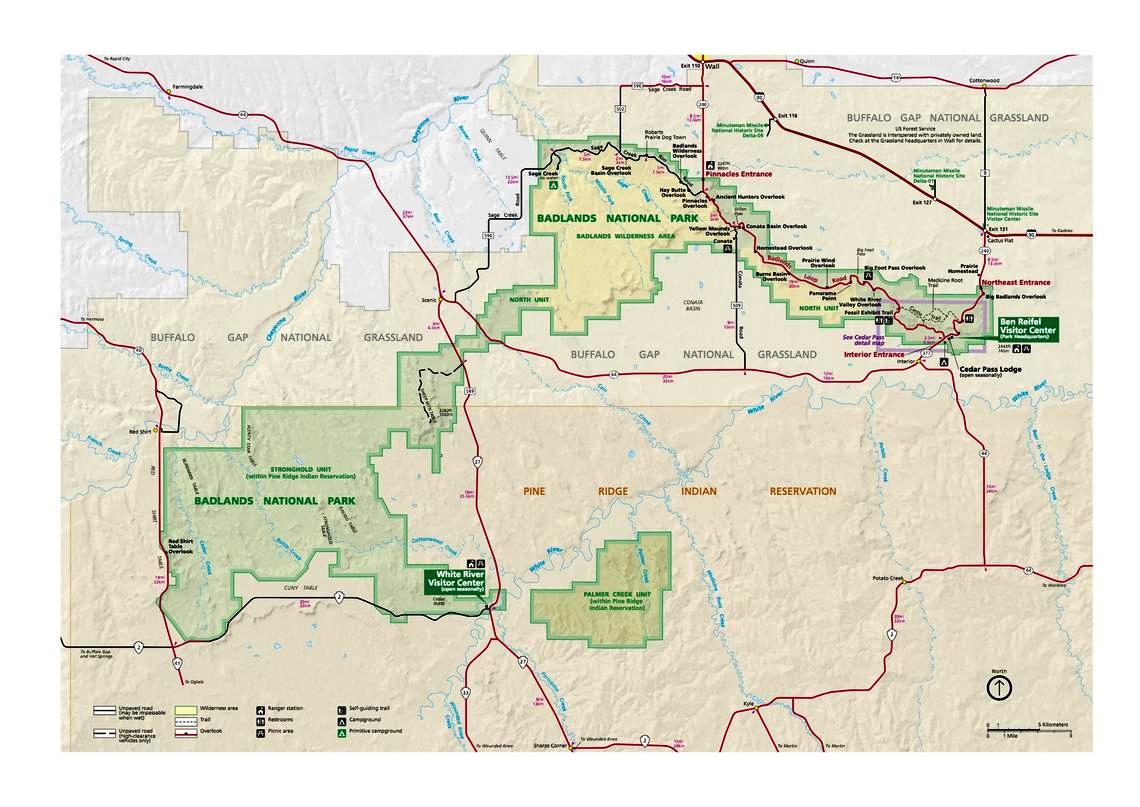 Fauna –
Badlands National Park is home to several types of herd animals. The mule deer is by far the most common animal to see on a trip through the park, but some visitors may also see the white-tailed deer. Visitors should keep their eyes peeled for three less common lowland animals: bison, bighorn sheep, and the bighorn sheep.
The blackthorn, improperly called antelope, is actually the only surviving member of a family of its own. It is truly a North American animal: its ancestors originated and remained here, unlike most other North American mammals that have crossed the Bering Land Bridge or made their way up from South America. The bow is incredibly fast, having been timed at over 50 miles per hour and keeping that speed up to five miles. It has a coloring is an adaptation to help it blend in on the open prairie.
Badlands National Park bighorn sheep have been absent from sight for nearly forty years. The last known bighorn sheep was seen in South Unit in 1926. In 1964, the park reintroduced sheep to the Pinnacles area and the Sheep Mountains area. In 1996, the sheep were moved from those areas to the Cedar Pass area near the park headquarters. Today, your best chance of seeing these elusive animals is along the Door Trail or the Cliff Shelf Nature Trail or the Pinnacles Overlook. Exceptional climbers and scramblers, bighorn sheep thrive in the steep rocky terrain of the Badlands buttes.
Furthermore, there is no animal more closely related to America than bison. Native to the Badlands, bison disappeared from this landscape in 1880. In 1963, bison were reintroduced to the Sage Creek basin. Due to the fear of brucellosis, Badlands bison are not a free herd. They are contained in 64,000 acres to prevent them from mixing with the surrounding cattle herds. (Note: No Badland bison has ever tested positive for brucellosis, a disease that causes calves to die during the birth process.)
Other animals include Hayden’s shrew and Sorex haydeni.
There are also some bats and other mammals such as rabbits, hares, squirrels, and other animals that are characteristic of this park such as some skunks, beavers, mice, porcupines, coyotes, and many others.