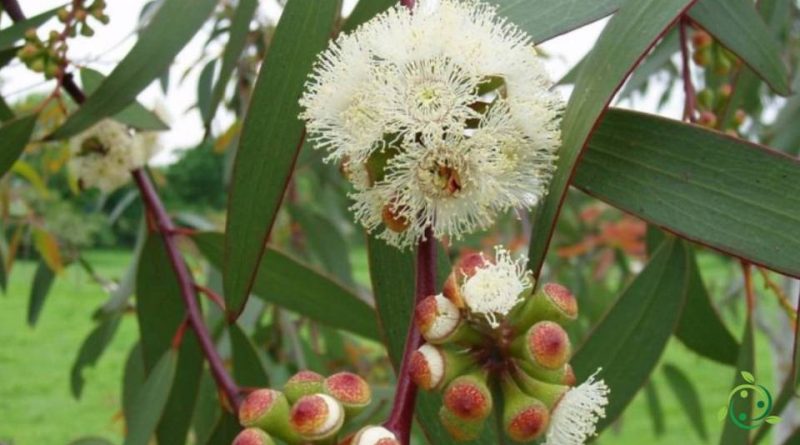 The River red gum (Eucalyptus camaldulensis, Dehnh. 1832) is a tree of the Myrtaceae family, native to Australia that can be found in many areas of the world with a temperate climate.
This plant has been present in Italy since 1803 and is widespread in the Mediterranean regions.
In its areas of origin it is a very widespread tree along many watercourses in the interior of the Australian continent.
Its reproductive structures are flowers that appear in spring-summer, yellowish in color, fragrant, pedunculated, gathered in small pedunculated umbrellas formed by 5-10 elements. The fruit is a hemispherical pyxium of 7-8 mm, which opens when ripe for 4 valves; the seeds, numerous, are brown in color.

Cultivation –
The River red gum is a plant that prefers loose and deep soils, especially sandy, it is also a very resistant tree and to dryness in the summer.
The tree develops rapidly from both fresh seeds and dried or kept cool. The plant quickly grows strong and can withstand drought already in the pipes used in reforestation.
Eucalyptus camaldulensis adapts well to any type of soil, even the most difficult ones.
The tree does not require an emergency irrigation system, as it is satisfied with natural rainfall, even if it is scarce. Irrigation is only necessary in the first period after implantation.
For its cultivation, due to its powerful root system, it must be avoided to place it near homes, water collection tanks, etc.
It should also not be placed in windy areas as they are trees that grow a lot and the highest branches break easily. This creates dangers to underlying people or things. It is therefore not the ideal plant to make a road tree.
The value of eucalyptus plantations is linked to their ability to enhance low-income land, otherwise not usable and that is why it was introduced as a pioneer species for marshy areas, which needed reclamation.
Finally, it should be remembered that excellent bonsai are produced with Eucalyptus camaldulensis.

Uses –
In Italy the rostral eucalyptus has been widely used in the South and in the islands. It is a tree, as mentioned, which produces a very pleasant shade in the fiery heat of the central Australian areas and plays an important role in stabilizing the banks of rivers, consolidating the soil and limiting its erosion.
Furthermore, being a fast-growing, frugal species, it is used in the reforestation of sandy dunes, in the construction of windbreaks, in road trees and in wood arboriculture. In the past it was thought that it could keep away the Anopheles mosquito, vector of malaria, thanks to the terpenes contained in the leaves. In reality, the antimalarial effect was due to the drying up of the soil carried out by reforestation with eucalyptus. From the leaves it is possible to extract eucalyptol, an ethereal oil for medicinal use.