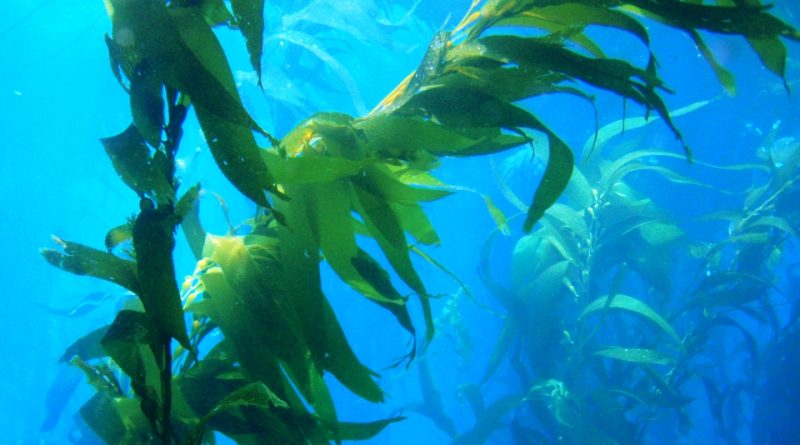 Geographic Distribution and Habitat –
Macrocystis pyrifera is a common alga along the eastern coast of the eastern Pacific Ocean (Baja California, southeast Alaska, Peru, Chile, Tierra del Fuego) and Australia (Victoria, Tasmania and New South Wales) and near to the islands of the South Atlantic Ocean (eg Tristan da Cunha, Gough etc.).
It is also present in Tierra del Fuego: mentioned by Carlos Gallardo in his book about the region, it is described by Lucas Bridges, who lived in Tierra del Fuego for forty years, as an excellent breakwater, to which the Yaghan natives to anchor their canoes and protect them from the waves; kelp, in their language, was called “howush”, but there was also the term “palan”, used to indicate a forest of kelp separated from the coast by a stretch of deep water.
Its habitat is that of cold waters (with temperatures below 21 °) and rich in nutrients where it forms real “marine forests”, in fact it grows in very dense groups that act as a shelter for numerous marine organisms, both fish and invertebrates , who also find their food in them. It is found on intertidal rocks or shallow subtidal rocks along the Pacific coast of North America (from British Columbia to California) and South America. In New Zealand it is found in the subtidal zone of the Southern North Island, the South Island, Chatham, Stewart, Bounty, Antipodes, Auckland and the Campbell Islands. This alga can also be found on rocks and on sheltered open coasts. 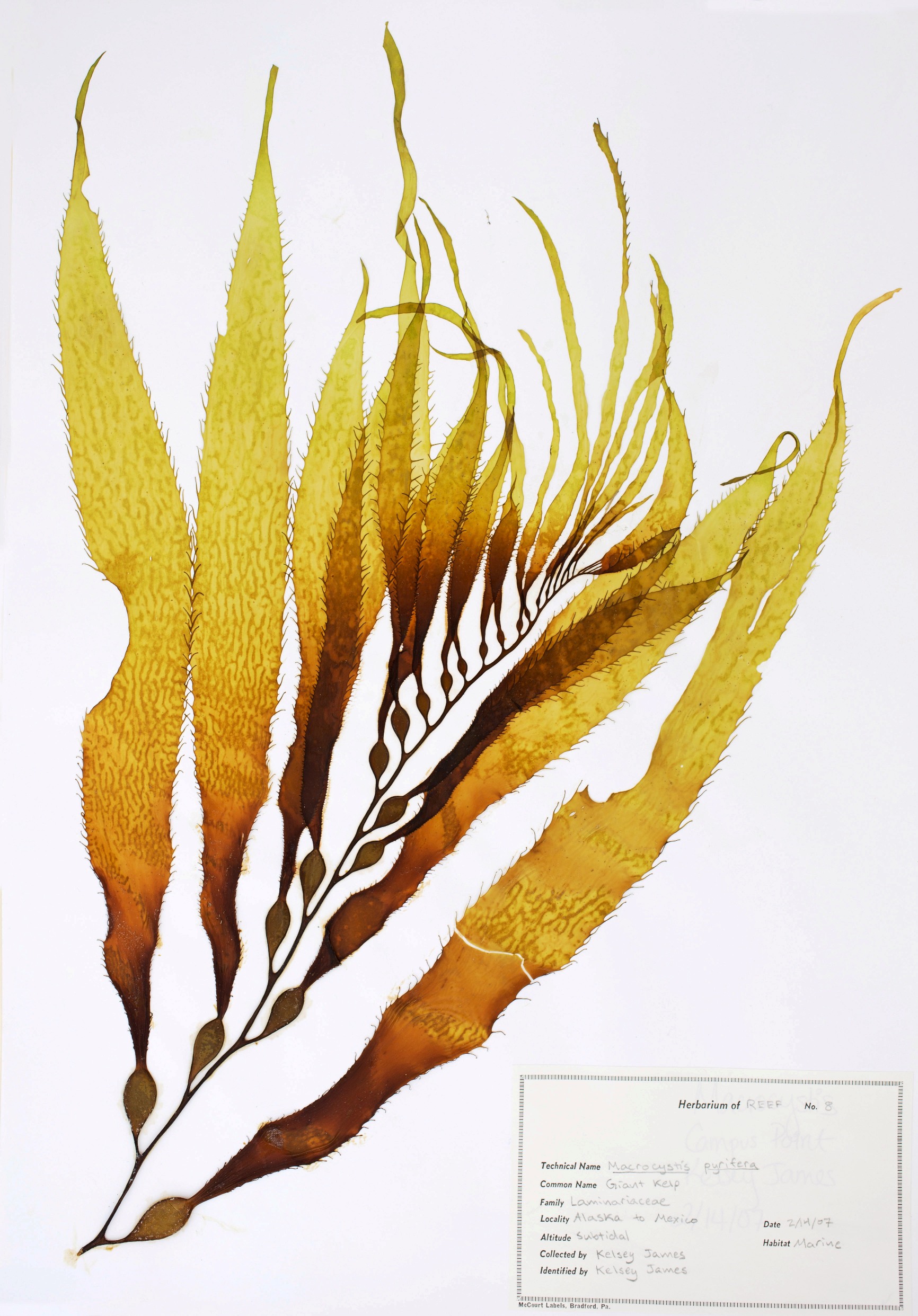 Description –
Macrocystis pyrifera is the largest of all algae and owes its name to its considerable size; in fact, this alga can reach 50 m in height and beyond.
The life cycle stage that is usually observed is the sporophyte, which is perennial and individuals persist for many years.
The stem develops irregularly, but is full of gas-containing blisters that make the alga stable.
The stems derive from a basal meristem, with as many as 60 stems in older and well protected plants. The blades develop at irregular intervals along the stem, with a single pneumatocyst (gas bladder) at the base of each blade.
At the base of each stem, on the other hand, small sacks develop on the lamina that release the biflagellate zoospores, these are the sporophylls.

Cultivation –
Giant kelp is believed to be one of the fastest growing organisms on Earth; this alga can also grow at a rate of 0.61 meters per day, with the juvenile specimens growing directly from the gametophyte of the mother plant, and only later they begin to anchor themselves to the bottom as a plant in its own right.
This seaweed is harvested because it is rich in minerals such as iodine, potassium and others; but the main products obtained from it are Alginates.
Where the bottom is rocky and is therefore ideal for anchoring these plants, this species becomes extremely luxuriant, creating real forests that host numerous species that depend on this habitat directly for food and shelter, or indirectly as soil. hunting for prey. These forests are also the habitat of many fish, such as Oxyjulis californica, a wrasse and some specimens of the Sebastidae family. Both the large size and the high number of individuals significantly change the availability of light, the flow of ocean currents and the composition of ocean water in the area where they grow.
Sometimes it competes for nourishment and space with Pterygophora californica.
Where surface waters are poor in nutrients, nitrogen, in the form of amino acids, is transported along the stem of the plant with a system that is very reminiscent of the phloem of vascular plants. This translocation is very rapid and also moves nutrients towards the lower areas, less exposed to light and where photosynthesis hardly takes place.

Customs and Traditions –
Macrocystis pyrifera has been used as a food source for many years; it also contains many compounds such as minerals, vitamins and carbohydrates, so it is also used as a food supplement.
At the beginning of the 20th century, many specimens were collected in California as a source of soda ash. Commercial interest grew significantly between 1970 and 1980, due to the production of alginates and biomass. However, its commercial production never became a reality.
However, the demand for this species is increasing due to its use as a fertilizer. There is ongoing research to use it as feed for other farmed species, such as shrimp. It was also investigated as a possible feedstock for conversion to ethanol for biofuels.
This seaweed, thanks also to its high iodine content, has therapeutic properties supported by various scientific studies. Its intake has many health benefits.
This alga, in addition to various compounds, salts and minerals, contains many vitamins and amino acids; among the amino acids we mention: aspartic and glutamic acids, alanine, arginine, cystine, glycine, phenylalanine, histidine, leucine, isoleucine, lysine, proline, methionine, serine, tyrosine, tryptophan, valine and threonine.
However, the most relevant content is the very high concentration of iodine which can reach 2,984 mcg x gram in certain species.
In addition, 100 grams of kelp seaweed have a caloric yield equal to 43 kcal.
Some studies support the efficacy of kelp powder for the treatment of hypothyroidism in patients with severe motor disabilities.
Furthermore, recent studies have found that algae can slow down the spread of some types of cancer, particularly breast and colon cancers.
According to studies, a compound found in kelp, fucoidan, can inhibit the growth of diseased cells in breast, prostate and lung cancer.
Another very recent study suggests that fucoidan causes cancer cell death by apoptosis in patients with leukemia. According to the researchers, it is the combination fucoidan and fucoxanthin that makes this alga a food with anticancer properties.
This alga is also used in diets to lose weight. In this sense, a 2014 study found that alginate could reduce the absorption of fat by the intestine by up to 75%, while a 2009 study suggests that this algae may have beneficial effects against diabetes and ‘obesity.
Furthermore, having a large content of chlorophyll, its intake stimulates the production of red blood cells. This mechanism benefits the oxygenation of all the organs of the body.
However, several studies are focusing on various beneficial aspects in the use of this algae.
Among the contraindications it should be remembered that when buying seaweed it is very important to buy organic products. These plant organisms in fact have a great ability to absorb heavy metals that would be harmful to health.
Another risk to be exposed when consuming this variety of algae is the overdose of iodine. In fact, an excess of iodine can result in hyperthyroidism and even thyroid tumors.

Preparation Method –
Kelp is a very important food in Japanese and Chinese cuisine.
A very simple way to consume this vegetable is to make a creamy carrot soup. However, thanks also to its therapeutic properties, in recent years kelp has become a very popular food also in the Western world.