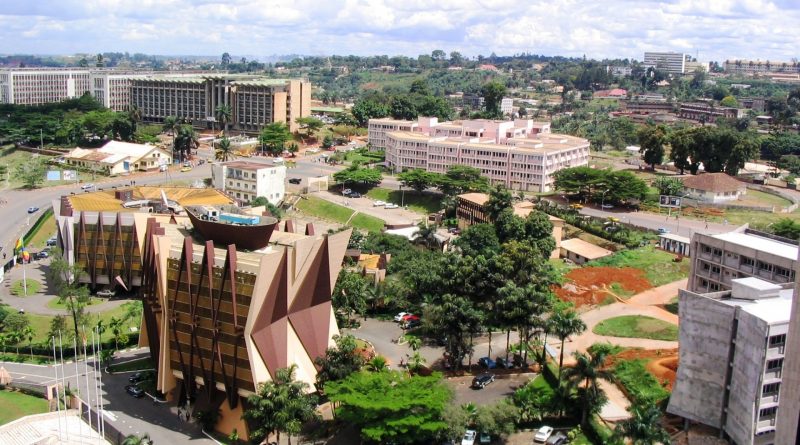 Cameroon is a unitary republic of equatorial Africa.
This state has an area of ​​475,440 km² and a population of 19,598,889 inhabitants (2012).
The capital of Cameroon is Yaoundé with 1,881,876 inhabitants (2005).
Cameroon is bordered to the northwest by Nigeria, to the northeast by Chad, to the east by the Central African Republic, to the southeast by the Republic of Congo, and to the south by Equatorial Guinea and Gabon. The coast of Cameroon overlooks the Gulf of Guinea in the Atlantic Ocean. Its territory stretches for almost 1,000 kilometers from the regions of Sudanese Africa almost to the Equator and sees a remarkable variety of climates and environments, ranging from the arid savannah of the north, to the wooded savannah in the central areas, to the lush equatorial rainforests. of the center and south. The territory consists for the most part of a vast undulating plateau, which covers almost the entire central and southern region; floodplains extend along the Atlantic coast and into the north, where the relief slopes down to the depression of Lake Chad.

Geography –
Cameroon is located in central-western Africa, overlooking the Gulf of Guinea, in the Atlantic Ocean. The country features all the major climatic and geographic regions of Africa: coast, desert, mountains, rainforest and savannah. The country borders Nigeria to the west, Chad to the northeast, the Central African Republic to the east, Equatorial Guinea and Gabon to the south, and the Republic of Congo to the southeast.
Cameroon is divided into five major geographic areas distinguished by physical, climatic and environmental peculiarities:
The coastal plain extends from 15 to 150 kilometers starting from the Gulf of Guinea and the average altitudes above sea level are around 90 meters. The climate is extremely hot and humid, with a short dry season. This coastal belt is densely forested and includes some of the wettest places on earth.
The plateau of southern Cameroon rises from the coastal plain to an average height of 650 meters above sea level. The equatorial rainforest dominates this region, although the alternation between dry and rainy seasons makes the climate less humid than on the coast.
A chain of irregular mountains, hills and plateaus known as the Cameroon Mountains, extends from Mount Cameroon on the coast, which represents the highest point in the country at 4,095 meters, almost to Lake Chad, the northernmost point. This region has a mild climate, particularly as regards the western plateau, although rainfall is abundant. Here they are found among the most fertile soils in Cameroon, particularly near the volcanic region of Mount Cameroon. Volcanism here has created lakes within craters. On August 21, 1986, one of these, Lake Nyos, erupted carbon dioxide, killing between 1,700 and 2,000 people.
The southern plateau rises north towards another grassy plateau, the Adamaoua massif. This formation extends from west to east with a system of mountains, forming a barrier between the north and south of the country. Its average altitude is 1,100 meters above sea level and its temperature varies from 22 to 25 ° C, with high rainfall.
The northern region stretches across a plain ranging from the Adamaoua massif to Lake Chad, with an average height of between 300 and 350 meters. Its characteristic vegetation is that of the savannah and the grassy scrub. This is an arid region with low average rainfall and characterized by high temperatures.
From the hydrographic point of view, Cameroon is divided into four main river basins:
The rivers that flow to the southwest, flowing into the Gulf of Guinea: the main ones are Ntem, Nyong, Sanaga, and Wouri.
The Dja River and the Kadéï that flow eastward to meet the Congo River.
In the north of Cameroon is the Benue River which flows north and then west, becoming a tributary of the Niger River.
The Logone River which flows north, meeting Lake Chad, a lake that Cameroon shares with three other neighboring countries (Chad, Niger and Nigeria). 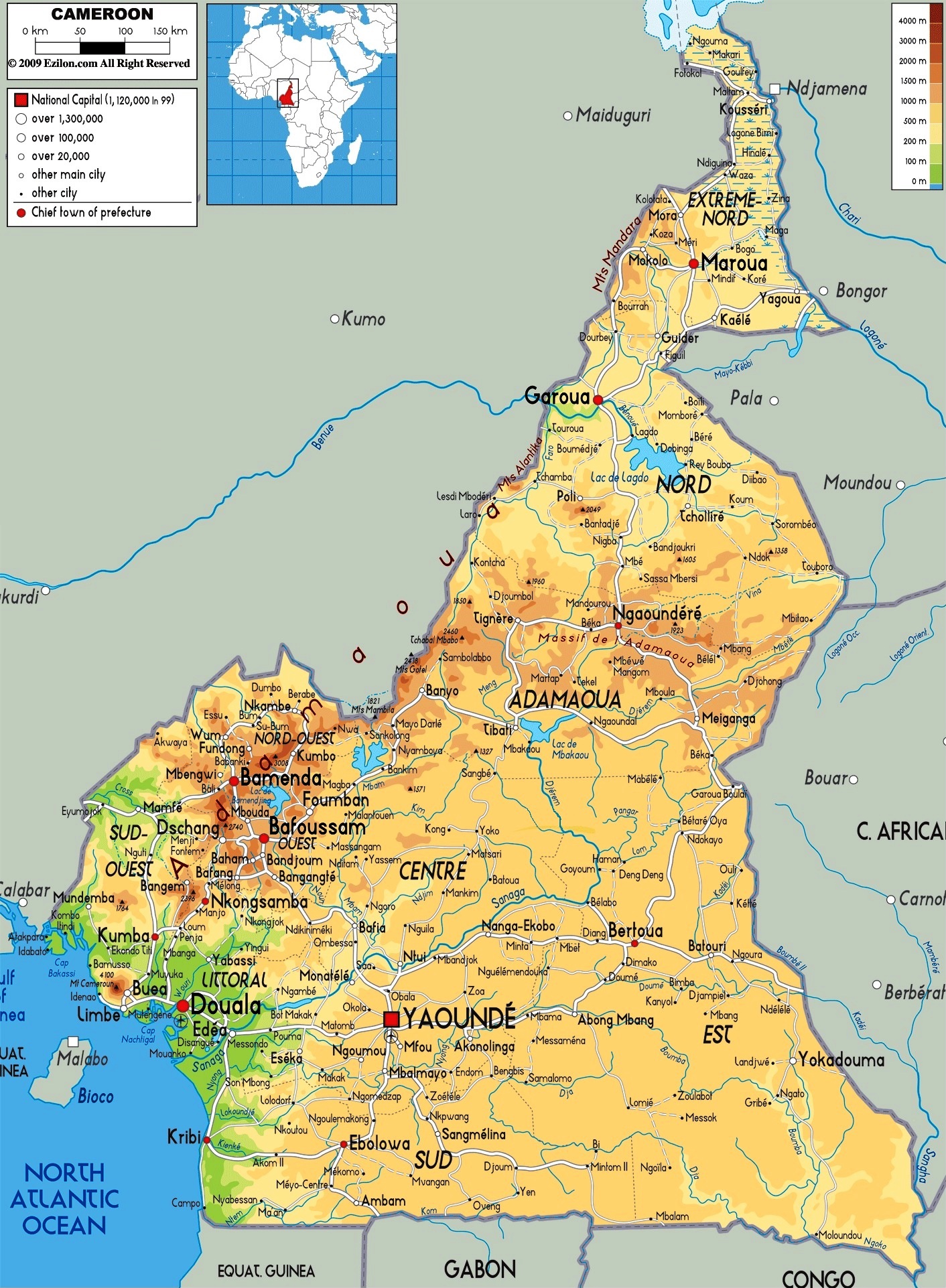 Climate –
The climate of this country is tropical, semi-arid in the north, and humid and rainy in the rest of the country. Almost everywhere there is a dry winter season and a rainy summer season, due to the African monsoon, which is shorter in the north than in the south, while some showers can occur along the coast even in winter. The driest area is the northernmost one, on the shores of Lake Chad, where less than 600 mm of rain per year fall, while the wettest is the coastal one, where it exceeds 3,000 mm.
In the southern inner area there is a plateau, having an altitude between 500 and 1,200 meters, where the altitude mitigates the climate, making the heat more bearable.
In the north, the climate is hot and semi-arid, with a rainy season from mid-May to September, and the rest of the year characterized by heat, often torrid, and aridity. In the winter months a dry wind blows from the Sahara desert, the harmattan, which raises the dust creating a characteristic haze; sometimes this wind can be pushed up to the central-southern areas of the country. At night it can get cool, sometimes even cold, with peaks around freezing in the far north. The northernmost areas fall within the climatic belt of the Sahel; further south it dominates the savannah.
In the north the sun shines regularly in the long dry season, while in the rainy period the hours of sunshine decrease a little; the least sunny months are July and August. Here is the average of the hours of sunshine per day.
Proceeding south, in the central-southern plateau, the climate becomes different: the rainy season becomes longer, moreover the heat is less intense, both because the cloudiness and early rains prevent spring heating, and because of the altitude.
Going further south, in the rest of the central-southern Cameroon plateau the total annual rainfall remains around 1,500 mm, but the rainy period becomes longer, so much so as to make forest growth possible.
Finally, along the coast, humid heat reigns all year round, and there is the rainiest area of ​​Cameroon, so much so that it exceeds 2,000 millimeters per year: the proximity of the Equator, which involves strong solar radiation, is added the humidity coming from the sea, which from May to October discharges monsoon rains, although with a decrease in rains from mid-June to mid-August in the southern part:

Flora –
Cameroon possesses an extraordinary biodiversity, so much so that on its territory there is every type of variety of flora and fauna present in tropical Africa: the vegetation passes from the rainforest to the gallery forest, to the savannah and finally to the steppe. Along the coastline stretches the rainforest, which is home to a large number of tree species, including oil palm, mahogany, bamboo, teak, ebony and rubber. This is followed by the mangroves, which date back to the river estuaries for considerable stretches. The rainforest gradually gives way to the gallery forest that extends over a vast region along the course of the rivers and the latter, in turn, gives way to the wooded savannah, which develops in the north-central area of ​​the country, on the plateau of Adamaoua. To the north of the plateau is the savannah, characterized by increasingly sparse tree species to finally arrive at the real steppe near Lake Chad, where the first extensions of only Grasses appear. The fauna varies with the plant environment: protected areas are 9.9% of the territory. The richest region is the one in the north, especially in the national parks of Bénoué, Boubandjidah and Waza (Cameroon has 14 national parks, as well as numerous other nature reserves, including the Dja wildlife reserve declared a World Heritage Site by ‘UNESCO in 1987).

Fauna –
The wildlife of Cameroon is also very rich even if threatened by various factors, some of natural origin others of anthropogenic origin.
Among the large animals of the savannah here you can meet: lions, cheetahs, leopards, buffaloes, elephants, hippos, antelopes and kudus, as well as numerous species of primates such as baboons, gorillas and chimpanzees. Unfortunately, as in many other countries of the African continent, environmental protection is badly reconciled with the needs of the local population; in fact, the demand for meat from wild animals, the commercial exploitation of forests, the progress of desertification, the impoverishment of the soil, intensive livestock farming, indiscriminate hunting and fishing have a very negative impact on the maintenance of the country’s biodiversity.