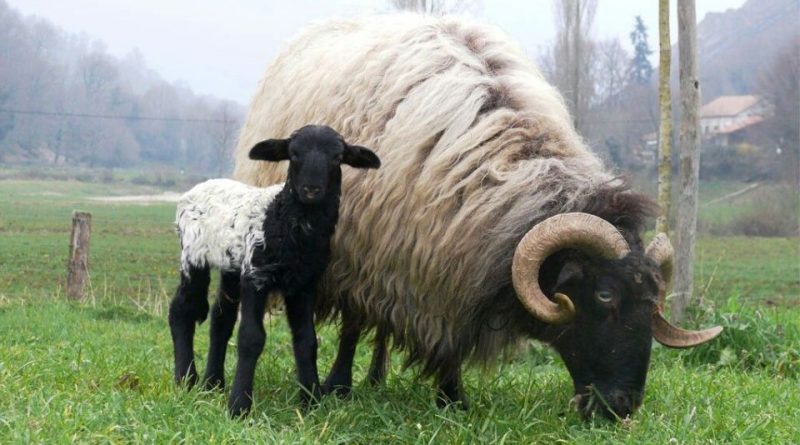 The manex tête noire sheep, also known as the “princess conqueror of the Basque mountains”, is a French sheep breed (Ovis aries Linnaeus, 1758) bred for centuries in the Vallée des Aldudes, with a main aptitude for milk production.

Geographic and Area Distribution –
The manex tête noire sheep is one of the four breeds present in the French Basque territory (the others are the latxa cara negra, the manex tête rousse and the latxa cara rubia), it is very rustic and has been an integral part of the landscape of the Vallée des Aldudes for centuries. .

Origins and History –
The manex tête noire breed is a very rustic sheep and has been an integral part of the landscape of the Vallée des Aldudes for centuries.
This breed as the most numerous tête rousse, is a sheep of Asian origin, probably imported by the Arabs, which over time, unlike other breeds of the Pyrenees, has not undergone crossings with the merino.
Its presence in the Basque Country is closely linked to the centuries-old tradition of transhumance: every year, in fact, at the beginning of spring, the flocks are led on the highest pastures of the Pyrenees.
Unfortunately, the Manex Tête Noire, like many historical indigenous breeds, is a declining breed because, despite being very suitable for mountain grazing and able to graze outdoors for even six months a year, it is less productive than other local breeds. In the 1980s it had 220,000 heads, while today there are about 85,000 remaining.

Morphology –
The manex tête noire sheep is a medium-sized breed.
This sheep is entirely covered with a thick blanket of wool (except for the legs and muzzle).
The head and legs are black;
Rams have large, long, spiral horns.

Productive attitude –
The manex tête noire is a sheep raised mainly for the milk intended for cheese making (especially pecorino). The production of suckling lambs constitutes an indispensable source of income for breeders of this breed, even if they are not adequately remunerated.
In the general economy of small farmers’ farms, however, the sale of lambs (which are born mostly between December and March) is an important addition to family income, particularly in small farms in the Garazi-Baigorri, Iholdi-Oztibarre and Soule regions.
Lambs, which grow in an uncontaminated environment, fed only with their mother’s milk, represent a gastronomic excellence typical of the region. Their flesh is fine, tender and slightly pink.
Traditionally, lamb arrives on the tables during the Easter period: the legs are roasted in the oven and the other parts are used for the stew.
However, the production sold locally is limited.
This supply chain, in fact, strongly depends on exports to Spain, which especially requires lambs during the Christmas period.
To safeguard it, it is necessary to guarantee safer, and therefore local, market outlets and more profitable prices.