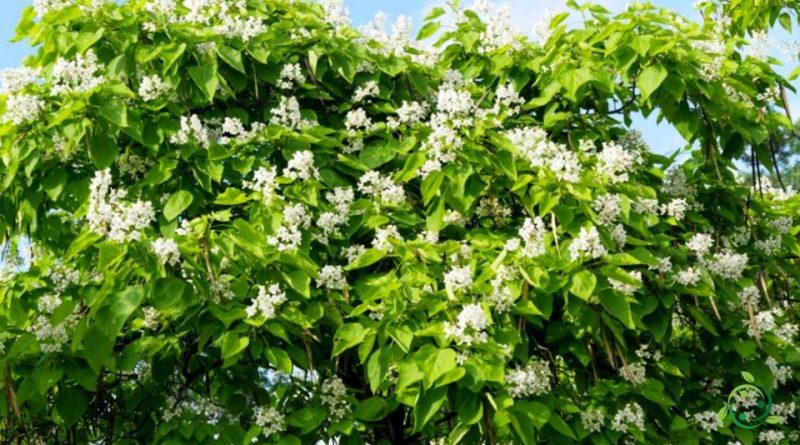 The Southern catalpa (Catalpa bignoniodies Walter) is a plant native to the central-southern and eastern United States, where it is found in broad-leaved forests in areas with a temperate-warm climate.
This plant was then introduced in Europe in the first half of the eighteenth century for ornamental purposes and which is now also found spontaneously.
Its reproductive structures occur with the flowering that occurs in late spring: the bell-shaped-funnel-shaped flowers are 5 cm long and have a white and perfumed corolla, flecked with red and yellow; they are carried in pyramidal panicles 15-20 cm long.
The fruits are linear sepicidal capsules, hanging, up to 40 cm long and 1 cm wide, first green then brownish-black, which remain hanging on the plant until late winter; they contain numerous brownish seeds.

Cultivation –
Southern catalpa is a plant that prefers bright and sunny positions but that also grows well in partial shade or full shade positions. This plant can stand the cold and usually tolerates even the coldest or windy winters well.
The planting of this plant must be carried out either in the period of October-November or in the spring between February and April, before the plant begins to vegetate.
The multiplication can be done by seed in spring or, always in spring, by cuttings using portions of semi-woody branch.
Before implanting, instead of the young seedlings, it is advisable to place well-humified organic substance in the hole that will host them, after which irrigations must be carried out until the root system is formed (which can be seen in proportion with the extension of the foliage).
Every year, then, at the beginning of spring and early autumn, it is good to provide the plant with well-ripened organic fertilizer.
Southern catalpa is a plant that easily tolerates even short periods of drought; in general it is a plant that is satisfied with rains and occasional watering, but it is good to provide water in periods of prolonged drought during the spring and summer months.
It is a plant that can grow even in very humid soils, as long as the soil is well drained.

Uses –
Catalpa bignoniodies is a plant that, by now, has spread in southern Europe as an ornamental tree (also for avenues) and in some cases has escaped cultivation.
It is used as an ornamental species, thanks to its large leaves, rich summer flowering and characteristic long pods (cigars).