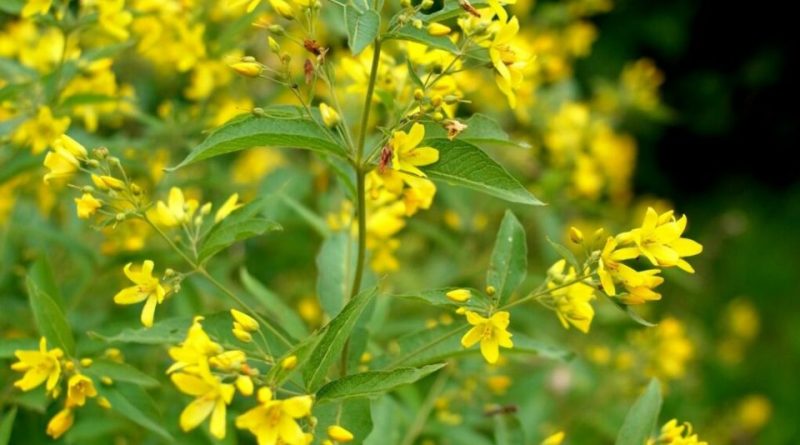 The Yellow Loosestrife (Lysimachia vulgaris L.) is a herbaceous species belonging to the Myrsinaceae family.

Etymology –
The term Lysimachia refers to the Macedonian general dyadoc of Alexander the Great, who followed in the enterprise of Asia (334-323) signaling himself for the value, then king of Thrace, Asia Minor and Macedonia: the legend tells that Lysimachus fed his oxen with this plant to calm them down. According to Linnaeus it could instead derive from Lysimachus, king of Sicily, of which Pliny also writes. Λυσίμαχος would derive from λύσις μάχη lýsis máche that dissolves the battle, the same meaning of loosestrife, a common English name of this genus.
The specific epithet vulgaris comes from vúlgus vulgo: very common, ordinary due to its widespread use, banal.

Geographic Distribution and Habitat –
The Yellow Loosestrife is a Eurasian plant, spread from Europe to Japan, up to the north in Europe in Great Britain but excluding the extreme north and south of the range.
Its habitat is that of swamps, streams and in shallow water in reed marshes, shady places near the water, where it avoids acid soils and is present in most wetlands, but usually in tall grass woods, on the edge of the scrub or the woods or even in the reeds of Phragmites. 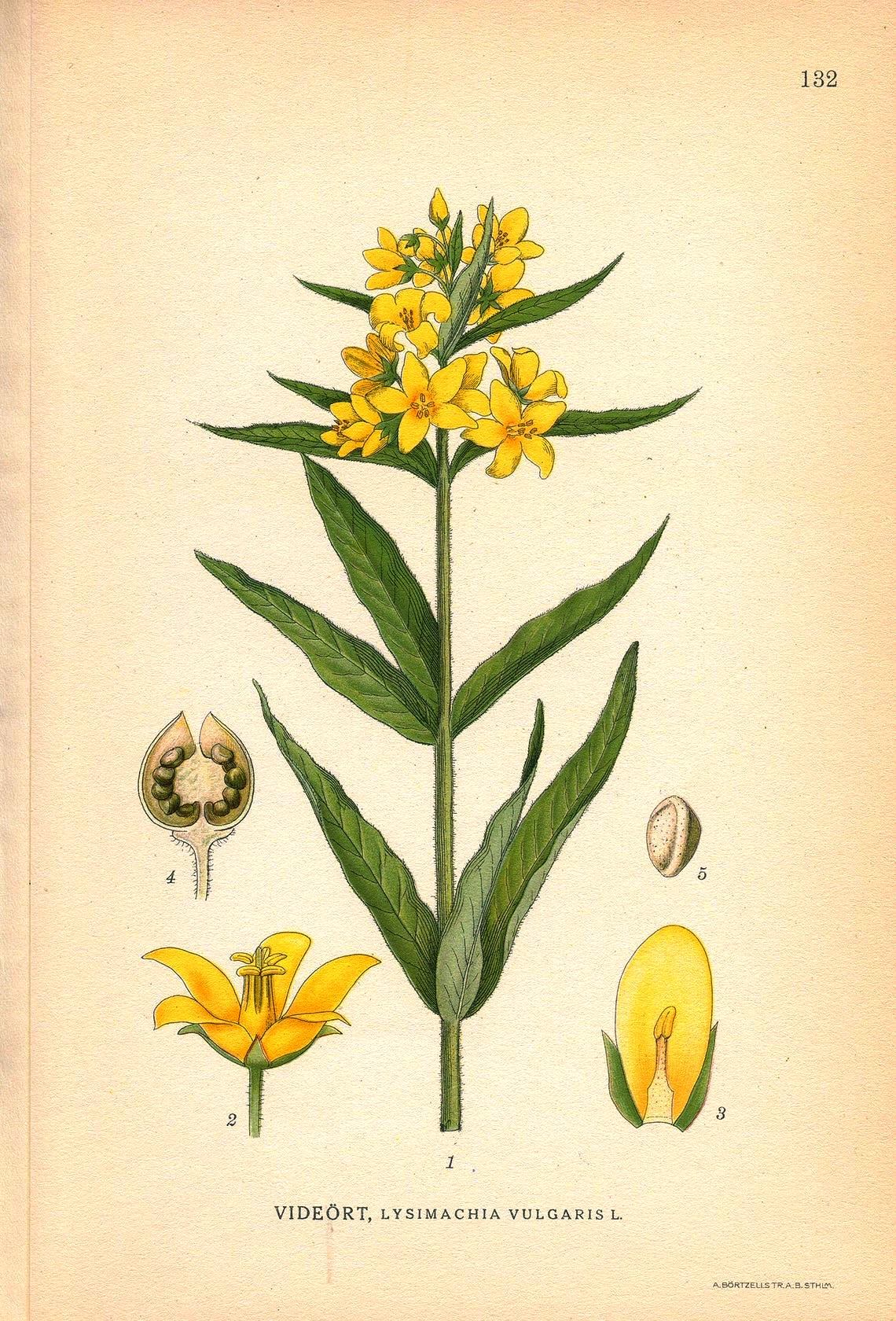 Description –
Lysimachia vulgaris is a perennial herbaceous plant with an erect habit, 50-150 centimeters high which develops from a rhizome.
The leaves are opposite, ovate to lanceolate in shape and speckled with translucent orange glands.
The yellow flowers are carried on erect panicles; the edges of the petals lack the fringe of hairs present in L. punctata, and the sepals which are hairy have a conspicuous orange margin.
The plant blooms from June to August.
The fruit is a septic capsule, globose of about 4 mm, ± bright, brown or reddish. Nymeric seeds, laterally compressed, oblong, about 1,5 mm, trine, wrinkled, light brown in color.

Cultivation –
Lysimachia vulgaris is a plant that in its natural state spreads through rhizomes, forming large patches and is sometimes considered invasive outside its original range.
It is an easy to grow plant that grows well in moist or wet clay soils with sun exposure or partial shade although it prefers a shady location.
The plant resists up to at least -25 ° C.
Propagation occurs by seed with sowing to be carried out in spring or autumn in a cold greenhouse. Seedlings can be transplanted when they are large enough to be handled and placed in individual pots or in open field in mid-spring.
The plant can also multiply through tufts, taking the larger ones and replanting them directly in their permanent positions, although it is better to pot the smaller tufts and grow them in a cold greenhouse until they root well. The plant is always in spring.
Basal cuttings can also be obtained, in the period from early spring to mid-spring. In this case the shoots with abundant underground stem are collected when they are about 8 – 10 cm from the ground. These should be placed in individual pots, kept in the shade in a cooler area or in a cold greenhouse until they root well. The transplant must be done in mid-spring.

Customs and Traditions –
Lysimachia vulgaris is a plant that has edible, medicinal and various uses.
For medicinal use it is an astringent herb, and is mainly used to treat gastrointestinal conditions such as diarrhea and dysentery, to stop internal and external bleeding, and to clean wounds.
The herb is astringent, emollient and expectorant.
The plant can be used internally or externally and is useful in the control of bleeding of the mouth, nose and wounds, in the containment of abundant bleeding of all kinds and in the treatment of diarrhea.
Mouthwash is prepared from the plant which is useful for treating sore gums and mouth ulcers.
Among other uses, it is reported that a brown dye is obtained from the rhizomes while the aerial parts contain a yellow pigment that was once used to dye fabrics.
The plant in the vegetative state repels midges and flies and in some areas it is burned in the houses to remove these insects.
This species is widespread with stable populations and is not currently under major threats despite the worldwide decrease of wetlands.
It is classified as “Least Concern” on the IUCN Red List of Threatened Species (2013.

Preparation Method –
Lysimachia vulgaris should be harvested when in flower, between June and August, and dried for later use.
You can prepare decoctions and infusions and also a mouthwash which is useful for the treatment of sore gums and mouth ulcers.