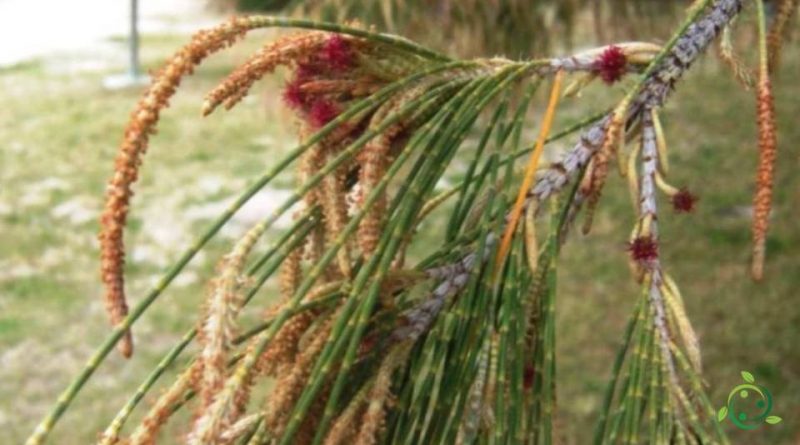 How the Australian pine tree is grown

The Australian pine tree (Casuarina equisetifolia L., 1759) is a plant of the Casuarinaceae family native to Indonesia and south-eastern Australia.
This plant was introduced in the warm-temperate climate zones of Europe and cultivated as an ornamental plant in parks and gardens.
Its reproductive structures are: male flowers, in terminal spikes, which extend with only one stamen each from the foliar whorls that perform the function of bracts; the female flowers have a similar arrangement, but the verticils are close together and compacted to form small globose cones of 1 cm.
It has brown fruits when ripe and are cones of trimi, that is small capsules consisting of a woody shell of bractal origin, which opens lengthwise into two valves releasing the pericarp containing the seed.

Cultivation –
The Australian pine tree is a plant capable of colonizing soils with high salinity, so much so that we often find it especially in coastal environments, and in any case it never exceeds 500 meters above sea level.
This plant prefers sunny exposures and loose or sandy soils, but can tolerate more compact soils and also does well on volcanic soils.
For its cultivation in Italy the most suitable areas are those of the southern regions as it cannot bear temperatures below 5-7 ° C.
The Australian pine tree, on the other hand, resists both strong winds and aridity very well, so much so that it is used as a pioneer plant and windbreak, also given its ability to withstand salinity and colonize very poor soils by consolidating sand dunes.
In other areas it is also used for ornamental purposes, also thanks to the rapidity of its growth.
Where this plant is grown, due to the development of its roots, other plants do not easily develop and its shade is very dense. Furthermore, due to the exudates of its roots, it is a plant that does not lend itself to cultivation in small areas.
As for pruning, Casuarina equisetifolia does not need it to maintain the natural shape of the plant.
Finally, multiplication.
The Australian pine tree propagates by seed, considering how fast the development of the plant is, even if cuttings can be prepared which generally take root very easily and after a stay in the nursery are planted the following spring.
The plant is reminded to place stakes to allow the plant to grow regularly in the first years of life.
For the plant it is useful to place a part of organic matter in the hole that houses the young plant in order to facilitate the rapid growth of the plant in the first phase.

Uses –
The Australian pine tree is a plant that in the areas of origin is used as a pioneer and windbreak plant. Outside its range it has found use for ornamental purposes.
It should also be remembered that its reddish wood has a high calorific value.