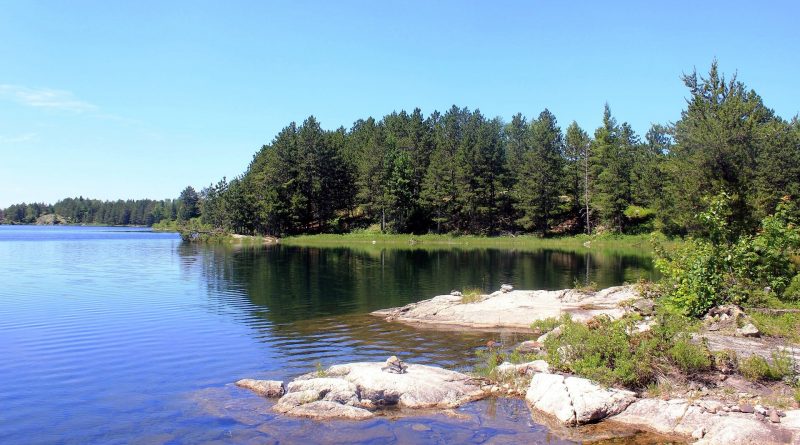 Voyageurs National Park, whose WDPA Code is: 988 is a national park located in Minnesota, United States of America.
This park has a land area of ​​882 km² and was established in 1975.
As with other parks in the United States it is managed by the National Park Service.
The park’s name commemorates the voyageurs, French-Canadian fur traders who were the first European settlers to frequently travel through the area.
The Voyageurs National Park is known for its exceptional water resources and is popular with canoeists, canoeists, other boaters and fishermen. The Kabetogama Peninsula, which lies entirely within the park and makes up most of its territory, is only accessible by boat. East of the park is the Boundary Waters Canoe Area Wilderness.
The park has several boat ramps and visitor centers on its outskirts, although the main body of the park is only accessible by boat or, in winter, by snowmobile, skis, or snowshoes.

Geography –
The area where the Voyageurs National Park is located is characterized by the presence of large lakes that contribute to giving this area its particular geographical and ecological characteristics.
The Voyageurs National Park includes all or part of four large lakes, namely:
– Rainy Lake – 97 km long, 1,495 km of coastline;
– Lake Kabetogama – 24 km long, 126 km of coastline;
– Lake Namakan – 26 km long, 235 km of coastline;
– Sand Point Lake – 13km long, 148km of coastline.
Of these, Namakan, Rainy, and Sand Point Lakes straddle the US-Canada border. Namakan Lake and Sand Point Lake are only accessible by boat except in winter. The southern boundary of the park is the northern shore of Crane Lake. The park has many smaller lakes, especially on the Kabetogama Peninsula. The most popular of these are on the Locator Lakes Trail.

Geology –
Voyageurs National Park is located in the Canadian Shield Tectonic Zone, with rocks between 1 and 3 billion years old. These are some of the oldest rocks on the North American continent. These were formed during the first ages of the formation of the earth, the rocks of the park were compressed and folded under tremendous pressure. Then flows of molten lava crept through the layers creating a mosaic of various gneisses and granites. Over time, additional layers of sedimentary rock developed on the summit, which were stripped away by continental glaciers from the Wisconsin Ice Age and earlier.
Most of the rocks in the park belong to the Archeon Quetico Subprovince, of the Superior Physiographic Province, associated with Kenoran Orogeny. These consist of schists and gneisses in the western and central part of the park and granite rocks of the Vermillion Granite Complex (2.69 to 2.64 Ga) in the east and southeast. The swarm of Kabetogama-Kenora dams (2.2 to 2.1 Ga) follows a system of Precambrian faults with a northwestern course. The northwest corner of the park contains metamorphosed rocks from the Wabigoon sub-province, forming a green stone belt that tends to the northeast. A lateral fault separates the two sub-provinces, called the Rainy Lake-Seine River fault zone. It is this northwest area of ​​the park on the Kabetogama Peninsula that saw a gold rush from 1893 to 1898. The Little American Mine, on Little American Island, is one of 13 abandoned mines within the park boundaries. .
Within the Voyageurs National Park there are terminal moraines while the northern part contains lake basins washed away by glaciers, but accumulations of glacial and glacial eruptions down to less than 100 feet are the norm. Deposits from Lake Agassiz are evident within the park, while glacial streaks and glacial erratics are common. 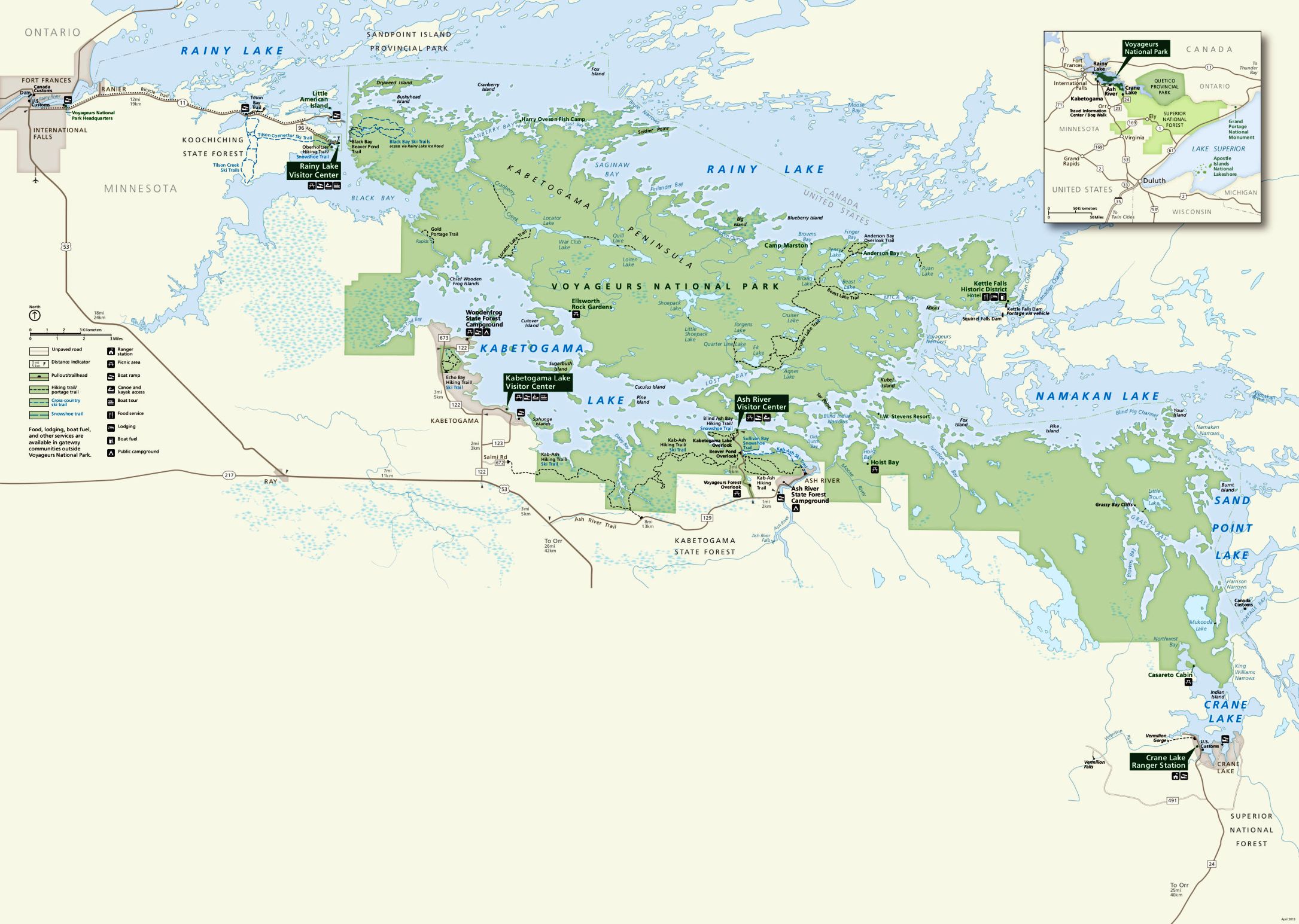 Flora –
Detail and vegetation of the Voyageurs National Park.
According to A. W. Kuchler’s U.S. Potential Natural Vegetation Types, Voyageurs National Park has two classifications; a Great Lakes Spruce / Spruce vegetation type (93) with a Northern Coniferous Forest vegetation form (22) and a Great Lakes Pine vegetation type (95) with a Northern Coniferous Forest vegetation form (22).
The Voyageurs National Park is located in a transitional area between the southern boreal forest in the north and the temperate deciduous forest in the south and east. It is composed of a variety of ecological systems, including coniferous forests, deciduous forests, swamps, rocky outcrops, and lake environments. The park is home to over 50 species of trees and shrubs, over 40 species of ferns and mosses, over 200 species of grass, sedge and rush, and over 400 species of wildflowers.
Historically, fire and wind have been the main influences on the park’s ecosystems. Today, past logging, beavers, exotic plants and climate change affect these ecosystems. To raise awareness of some of these issues and promote the benefits of native plants, the park created an ethnobotanical garden on the grounds of the Rainy Lake Visitor Center. Additionally, the park is cultivating a native plant nursery to help with revegetation efforts in disturbed areas.
Traveling along the waters of Voyageurs, you can also enjoy the same views that French-Canadian travelers have witnessed: majestic white and red pines interspersed with spruce, fir, aspen, birch, stone pine and red maple. Disembarking on a rocky coast, you can find the same delicious blueberries, raspberries, strawberries and hazelnuts that supported travelers on their travels, as well as the bearberry they smoked in their pipes and the birch bark they used to patch up their canoes. The very tall woody plants continue to thrive in the park as they have for thousands of years.
Among the wild flowers we remember the first violets in spring, the last stars in autumn, the forests and wetlands of Voyageurs come alive with colors. Over the course of the season, you can watch the colors change as over 400 wildflowers bloom.
Many of the plants found in the park have been used by people for centuries. Some of these plants are important food sources, while others have been used as shelter and clothing
In the Voyageurs National Park, forests and wetlands are healthy, but they are also threatened. One of the most significant threats are exotic plants. These are plants that are not native to the region. Some of these exotic animals are relatively harmless, while others have the potential to occupy large areas of habitat, displacing native plants and animals that depend on them. The staff works diligently to prevent these invaders from settling in the park and to remove them when they are found.
Many species of mushrooms can be found within the Voyageurs National Park. Please note that mushroom picking is prohibited within the park boundary.

Fauna –
This national park is home to woodland wolves, black bears, elk, an abundance of white-tailed deer and smaller mammals such as foxes, beavers, river otters, muskrats, snowshoe hares and weasels that can be seen crossing frozen lake surface during winter. Bald eagle, loon, double-crested cormorant, owl, and warblers are common birds found.
The boreal forest brings with it not only a variety of tree and plant species, but also a unique amount of wildlife. The park is home to more than 100 bird species, including eagles and loons, and more than 50 mammal species, including moose, beaver and wolves.
Also as a water park, the Voyageurs National Park supports many types of wetlands, such as sphagnum bogs, wooded swamps and swamps. This wide range of aquatic habitats is ideal because all amphibians rely on water at some point during their life.
There are also many species of birds including the Double Crested Cormorant. This bird, with its all-black body, can be found sunbathing on a rock to dry itself off, or feeding on fish in shallow bays.