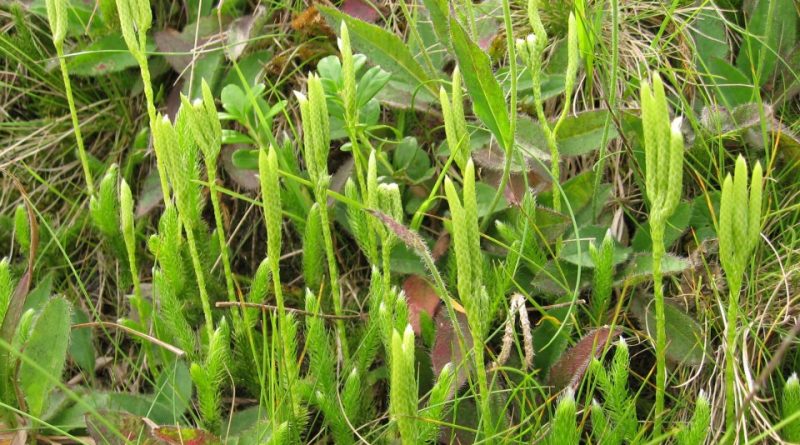 Etymology –
The term Lycopodium comes from the Greek λύκος lýcos lupo and from πóδιον pódion piedino: wolf’s foot.
The specific epithet clavatum comes from cláva clava: due to the presence in the species of club-shaped organs or carpophores.

Geographic Distribution and Habitat –
Club moss is a plant that grows in the arctic and temperate areas of North America, Europe and Asia, in Central America; South America, the Caribbean and in some scattered areas of tropical Africa and tropical Asia.
Its habitat is that of moors, fields and pastures in cool and humid climates where it prefers open ranges such as mountain sides, moors, glades and road cuts in the rainforest. In the tropics it grows in mountainous areas above 1,300 meters. 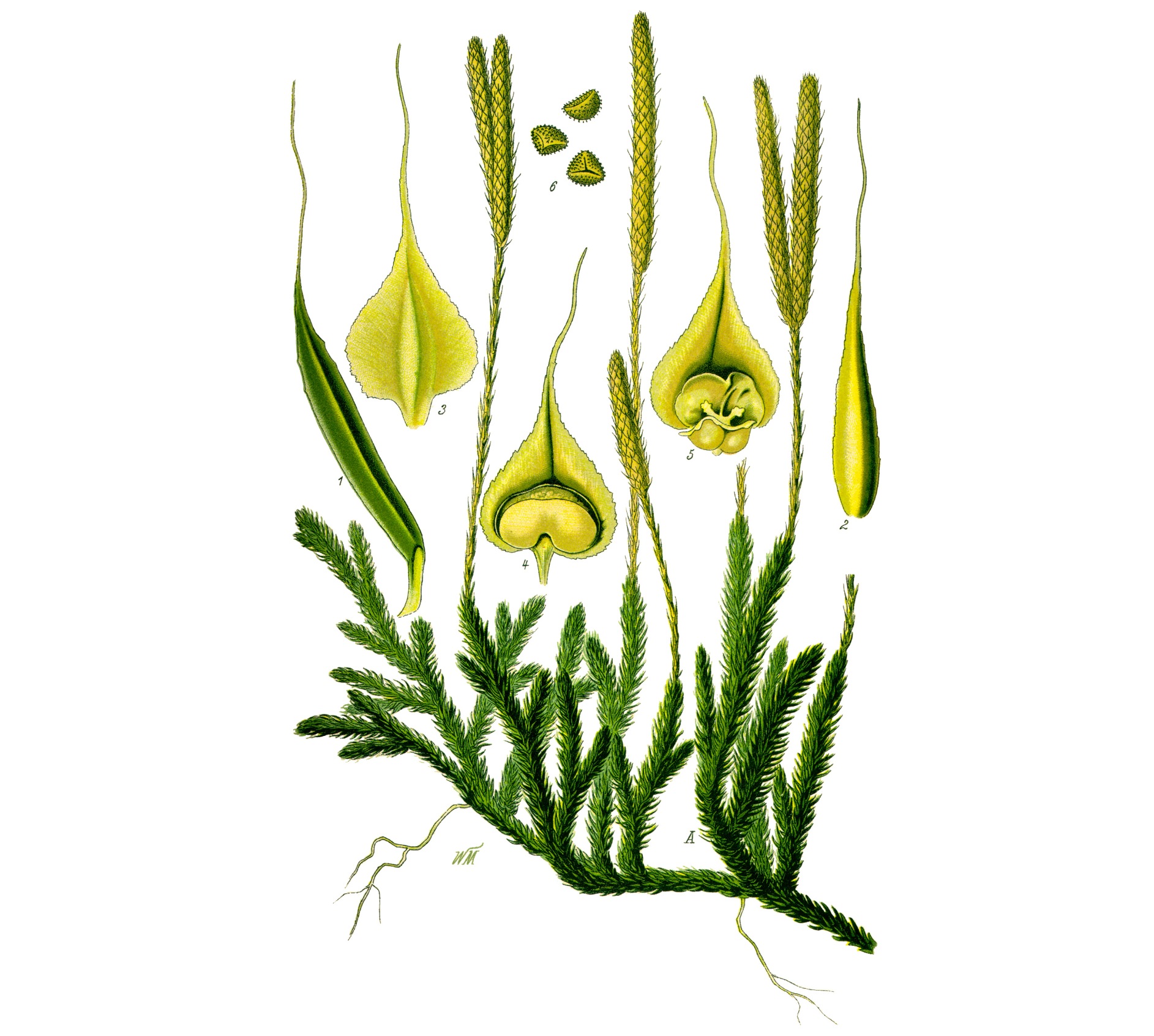 Description –
Lycopodium clavatum is a spore-bearing vascular plant, which grows mainly prostrate along the ground with stems up to 1m long.
The stems are very branched, and densely covered with small spiral leaves. The leaves are 3-5mm long and 0.7-1mm wide, tapering to a thin white hair-like tip.
The branches, which bear strobili or cones of spores, become erect, reaching 5-15 cm in height from the ground and their leaves are modified as sporophylls which enclose the spore capsules or sporangia.
The spore cones are yellow-green, 2-3 cm long and 5 mm wide. Horizontal stems produce roots at frequent intervals along their length, allowing the stem to grow indefinitely along the ground.
The stems superficially resemble small coniferous seedlings, although they do not belong to another genus.
Lycopodium clavatum is a highly variable species that exists in an almost continuous series of forms, from compact ones with parallel branches and firm, imbricated leaves to widely branched plants with diverging branches and soft, broad leaves. The former are typical of cold and exposed habitats, the latter of warm and sheltered places.

Cultivation –
Club moss is an evergreen perennial that is related to ferns. The plant is commonly harvested in its natural state for medicinal use and for the various uses of its spores. Both the spores and the aerial parts of the plant are harvested in commercial quantities from the natural environment and traded internationally.
It is a plant that grows in a wide range from sea level in the Arctic Circle to mountainous areas above 1,300 meters in the tropics.
The plant resists down to at least -15 ° C and thrives in peaty soils and in a shady location. It also requires a humid atmosphere.
plants of this genus are difficult to establish as the roots are delicate and subject to rot; most of the water is absorbed through the foliage.
The underground prothallus develops slowly and reaches sexual maturity after 6 – 15 years and can live up to 20 years.
This species has an apical shape, differentiated in various tissues, which lives in close symbiosis with a fungus, perhaps a species of Pythium. Without the fungus, gametophyte development stops at an early, low-cell stage. Once the sporophyte has established itself, it can spread quickly thanks to the long creeping stems. If competition with higher growing plants is not strong, it is a long-lived species and slowly forms large colonies.
The propagation takes place by spores that can be sown as soon as they are ripe on the surface of a sterilized soil rich in humus. At this stage, the compost must be kept moist, preferably by placing a polyethylene film over the seedbed.
The transplant should be done as soon as the seedlings are large enough to be handled and kept moist until they are well established. However, it is not necessary to plant outdoors until the ferns are at least 2 years old and therefore only in a very well sheltered position. The spores are generally produced in abundance but are difficult to successfully grow. These can remain dormant for 3 to 8 years. During this time they settle in the soil at a depth of 3 – 10 cm and this, combined with a relatively thick spore wall, can significantly delay germination. It has been seen that when the spores are exposed to sulfuric acid, germination takes only 2 months.

Customs and Traditions –
Lycopodium clavatum, although like many mosses it is widespread globally, is increasingly confined to undisturbed sites, disappearing from cultivated areas and sites with regular fires. As a result, it is endangered in many areas.
The “lycopodium dust” spores of this species are used, which are explosive if present in the air in sufficiently high density. They were used as flash powder in early photographs and magical acts.
The spores contain an oil and are in fact highly flammable. The oil contains 80 – 86% decyl-isopropyl acrylic acid, 3 – 5% glycerin and solid fatty acids (mainly myristic acid).
The spores appear as a yellow-brown, odorless and tasteless powder. It was once used in pharmacies for herbal teas, with diuretic and laxative virtues or for external use as a curative cleanser for skin affections. It is still used in homeopathy. Not all of its active ingredients are well known and the presence of alkaloids makes it slightly toxic.
The plant in fact contains lycopodine, which is poisonous, paralyzing the motor nerves; it also contains clavatin which is toxic to many mammals; however the spores are not toxic.
Lycopodium clavatum spores, used as a spread, can cause asthma and other allergy problems (itchy skin, eye and nose problems) if used for a long time.
The powder is safe for consumers who are exposed to small amounts, but hepatotoxic effects have been observed.
When the spores enter surgical wounds, a lesion can develop months or even years later.
This species, with its wide distribution, has found a wide range of medicinal uses around the world. There has been considerable research on the active constituents of the plant. The aerial parts contain dihydrocaffeic acid, which has a hypotensive effect, as well as alkaloids such as lycopodine, quinoline, clavatin, clavatoxin and annotinin, all of which cause an increase in blood pressure.
Lycopodine also stimulates the peristaltic movements of the intestine and the contraction of the uterus.
The aerial parts also contain acid derivatives and flavonoids.
A plant extract with methanol showed strong prolyl-endopeptidase inhibiting activity and is expected to have activity against memory loss.
A decoction prepared from the plant is analgesic, antirheumatic, carminative, mildly diuretic, stomachic and tonic. This is used internally in the treatment of urinary and kidney disorders, rheumatic arthritis, catarrhal cystitis, gastritis, dysentery, malaria etc.
In folk medicine, the whole plant is chewed to induce vomiting after food poisoning or acute stomach pain.
The sun-dried and pulverized leaves are mixed with plantain and milk, and the mixture is given in small doses to children to treat diarrhea and dysentery.
It is applied externally to skin diseases, wounds, ulcers and irritations.
The whole plant is grilled with sugar cane and banana peels and applied to chapped lips to promote healing.
A homeopathic remedy is constituted by the spores; has a wide range of applications including dry cough, mumps and rheumatic pains.
The plant is one of the ingredients of a remedy to relieve jet lag.
Among other uses it is reported that the spores are water repellent and can be used as a dusting powder to prevent things from sticking together.
They are also used as talc and to season molds in iron foundries.
The plant can be used as a dye mordant and to repel insects.
Finally the stems are transformed into mats.

Preparation Method –
Club moss can be harvested all year round and used fresh or dried.
The spores are harvested when ripe in late summer.
Decoctions and countless other uses can be prepared as described above.