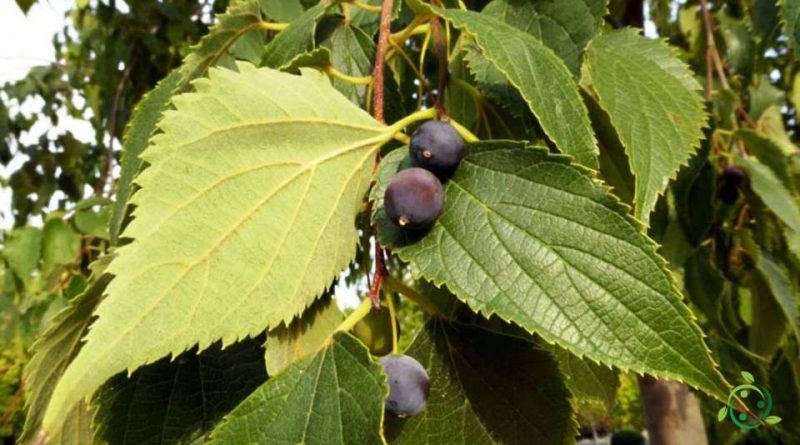 The European nettle tree (Celtis australis L., 1753) is a plant of the Cannabaceae family native to southern Europe, North Africa and Asia Minor.
This plant is widespread in an area ranging from southern Spain to the Caucasus and western Asia. In Italy it is quite common up to 600-700 meters above sea level.
Its reproductive structures are bisexual and unisexual flowers, brought on the same plant, yellowish, solitary or in groups, with flowering in May; the fruits are black pedunculated drupes when ripe.

Cultivation –
The European nettle tree is a plant that adapts well to cultivation in Italy.
It is a tree that fears neither cold nor heat, and it grows in practically any position, but prefers a position where it receives direct sunlight for at least a few hours a day.
Instead, it fears late frosts, which compromise the buds already present.
From a pedological point of view, it adapts well to stony soils, where the robust root system penetrates the cracks in the rocks, favoring their crumbling: hence the name of stone breaker. However, it prefers stony soils, very well drained, calcareous, even poor ones.
As for the water supply, Celtis australis is a plant that grows even in non-humid soils, being well satisfied with rainwater in the cold season even if it is advisable to irrigate plants that grow in looser soils and, in any case, in particularly drought periods.
Obviously, for younger plants it is good to provide a greater quantity of water, always being careful not to cause water stagnation that could lead to root rot.
Before planting, it is advisable to place organic fertilizer in the hole that will house the young seedling, such as mature manure or earthworm humus, and to add organic matter every year at the end of the winter period and to bury it near the collar of the plant.
The European nettle tree multiplies with the sowing of the seeds contained in the fruits, taking care to keep the seedbeds in a protected place; in fact, the new seedlings must be planted after at least two years, as the young specimens do not tolerate persistent frosts. The plant can also be propagated by semi-woody cuttings practiced in autumn and spring.

Uses –
The European nettle tree is a plant widely used in the trees of avenues, in parks (for its rapid growth) and in reforestation in stony and difficult soils, for its resistance to urban pollution and for the dense shade, despite the risks for the paving road, due to the fact that its root system can also develop on the surface.
The whitish-gray wood is hard and elastic; it is a good fuel and gives high quality coal.
As the wood is particularly durable, it is used in carpentry for furniture, handles, agricultural tools and lathe work.
The bark is instead used in dry cleaners and a yellow pigment is extracted from it. In Romagna, with two long and flexible intertwined branches of this plant, a whip was made (in the Romagna dialect parpignen) used by peasants to incite working animals. This whip is still used in folklore shows by characters called sciucarèn (snappers); the whips are snapped in harmony creating particular rhythms. In Calabria, wood is traditionally used to make the stick with which the cheesemaker broke the curd and collars for sheep, goats and cattle.
The European nettle tree is also used in the kitchen as a jam can be obtained from the berries; these are put in a deep pot and covered with cold water, which must be at least three fingers above the berries; add half the weight in sugar and the juice of one lemon. It is cooked in moderation; when the water is halved it is blended with an immersion mixer and filtered.