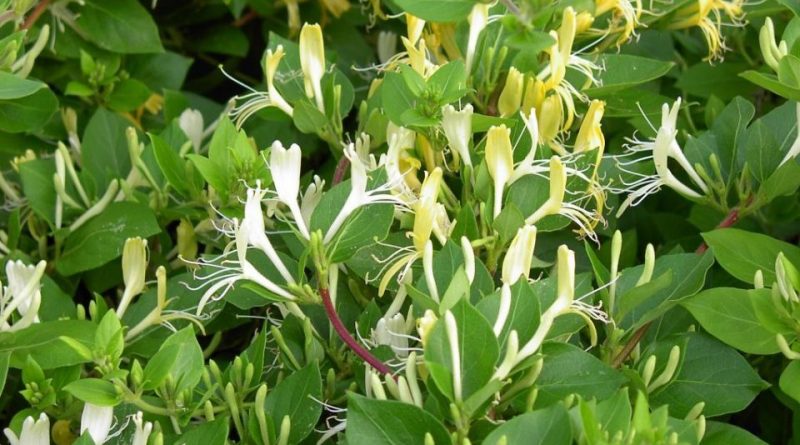 The Japanese honeysuckle  or golden-and-silver honeysuckle (Lonicera japonica Thunb.) is a shrubby climbing species belonging to the Caprifoliaceae family.

Etymology –
The term Lonicera of the genus was dedicated by Linnaeus to the German physician and botanist Adam Lonitzer (latinized in Lonicerus, 1528-1586), author of a treatise on medicinal herbs.
The specific japonica epithet refers to species that have Japanese origin or distribution.

Geographic Distribution and Habitat –
Lonicera japonica is a species native to East Asia that is often grown as an ornamental plant, but has become an invasive species in several countries.
This species is present in several countries of East Asia, such as China, Japan, Korea and is also naturalized elsewhere such as in Argentina, Australia, Brazil, Mexico, New Zealand and in most of the United States, including Hawaii, as well as in a number of islands in the Pacific and Caribbean. It is classified as a noxious weed in Texas, Illinois and Virginia, and is banned in Indiana and New Hampshire. It is also listed in New Zealand’s National Pest Plant Accord as an undesirable species.
Its natural habitat is that of the thickets of the hills and mountains of Japan and the forests of the mountains and plains of Korea. 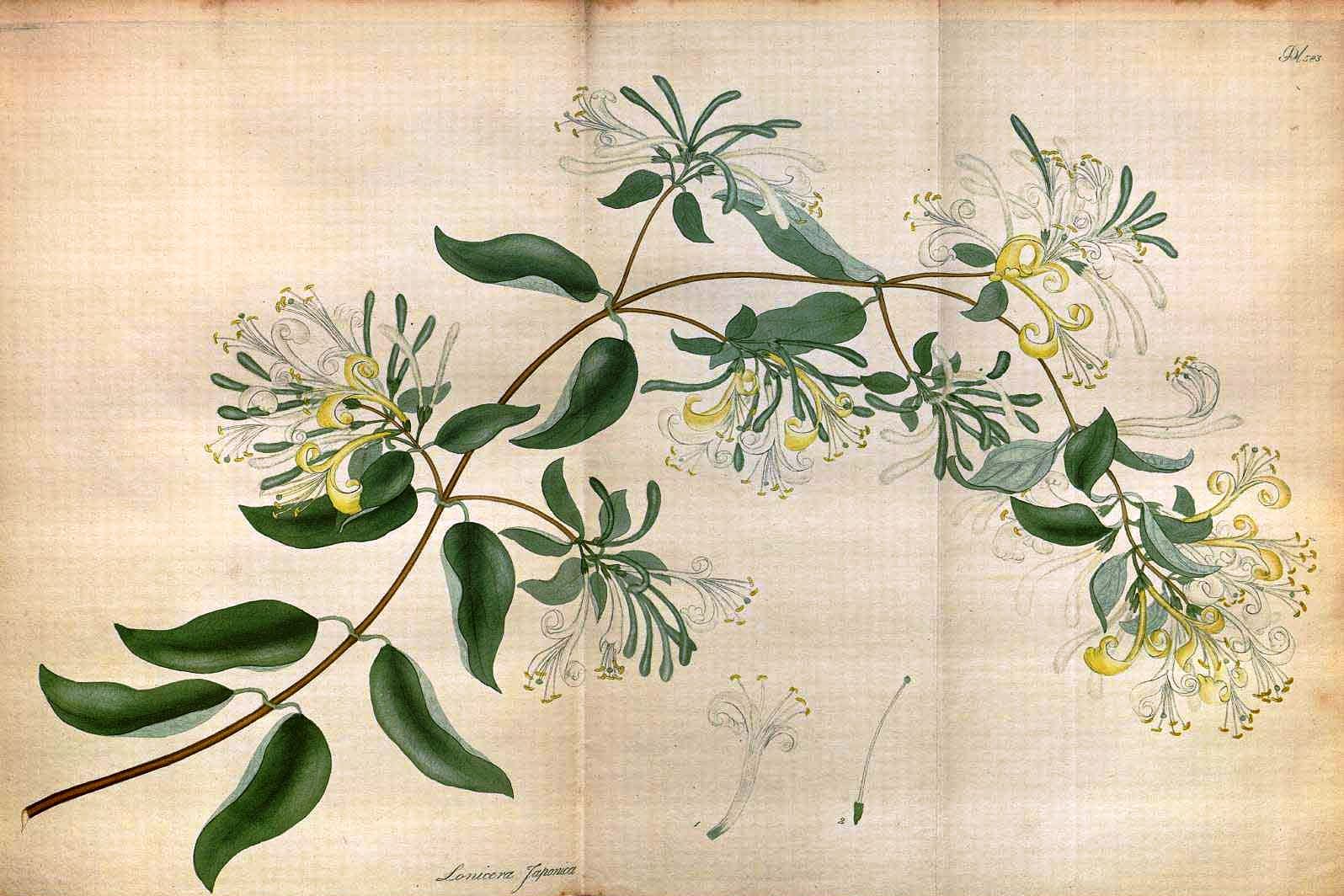 Description –
Lonicera japonica is a shrub species in the form of a vine capable of climbing up to 10 m in height or more in trees.
The leaves are ovate, opposite and simple, 3-8 cm long and 2-3 cm wide.
When its stems are young, they are slightly red in color and can be blurry. The older stems are brown with peeling bark and are often hollow inside.
The flowers are double-tongued; when they open they are white in color and then have shades of yellow and sweetly scent of vanilla.
The fruit, which is produced in autumn, is a spherical black berry of 3-4 mm in diameter containing some seeds.
Remember that while flower nectar can be safely consumed by humans, all other parts of the plant have the potential to be toxic.

Cultivation –
Japanese honeysuckle is a plant mainly from the temperate zone, although it has been grown in the tropics. Plants are hardy to around -20 ° C and foliage can be damaged in strong freezing winds, but the plant usually recovers in spring.
Fruits ripen only after a hot summer.
It is a plant that prefers a good moist soil with its roots in the shade and the epigeal part that goes in search of the light.
This species grows in any soil in partial shade, and established plants are drought tolerant.
The Lonicera japonica tends to climb up, by twisting, other plants and makes an excellent screen for a fence facing north or east. Plants should be spaced about 1 meter apart.
This species, however, can become an invasive weed and has escaped cultivation in North America where it can compete with native species.
There are several varieties marketed for their ornamental value.
Propagation occurs by seed with sowing to be carried out immediately after harvesting. The stored seed requires 2 months of cold stratification.
The transplant should be done in late spring or early summer, after the last frosts expected.
Propagation can also be carried out through semi-mature wood cuttings, 7 – 10 cm, to be done in the month of July – August in a shady area.
Or you can prepare mature wood cuttings of 15 – 20 cm to be done in November in an unheated greenhouse.

Customs and Traditions –
The flowers of the Lonicera japonica are edible for humans and appreciated for their sweet-tasting nectar. Flowers can also be a significant source of food for deer, rabbits, hummingbirds, and other wildlife.
In traditional Chinese medicine, Lonicera japonica is called rěn dōng téng (忍冬藤); literally “winter-resistant vine”) or jīn yín huā (Chinese: 金銀花; literally “gold-silver flower”). Alternative Chinese names include er hua (二 花) and shuang hua (雙 花), which means double-colored flowers. In Korean, it is called geumeunhwa.
The dried leaves and flowers are used in traditional Chinese medicine, being used to treat fever, cold-related headaches, coughs, thirst, certain inflammations including sore throats, skin infections, and tumor necrosis.
This plant has an antiviral action linked to loniflavone, a compound present in Lonicera japonica, which has been studied in computational studies, in which the ability of this compound to bind with high affinity to the spike protein of SARS-CoV-2 has been demonstrated , a first step towards developing drugs for the disease caused by the virus.
Lonicera japonica also contains methyl caffeate, 3,4-di-O-caffeylquinic acid, methyl 3,4-di-O-caffeylchinate, protocatechuic acid, methyl chlorogenic acid and luteolin. The two biflavonoids, 3′-O-methyl loniflavone and loniflavone, along with luteolin and chrysin, can be isolated from the leaves.
Other phenolic compounds present in the plant are hyperoside, chlorogenic acid and caffeic acid. The two secoiridoid glycosides, loniceracetalides A and B, can be isolated, together with 10 known iridoid glycosides, from flower buds. The plant also contains the saponins loniceroside A and B and the anti-inflammatory loniceroside C.
For medicinal use, in general, the stems and flower buds are alterative, antibacterial, anti-inflammatory, antispasmodic, purifying, diuretic, febrifuge.
The plant is also used to reduce blood pressure.
The stems are used internally in the treatment of acute rheumatoid arthritis, mumps and hepatitis.
The stems and flowers are used together as an infusion in the treatment of upper respiratory tract infections (including pneumonia) and dysentery.
The infusion of flower buds is used in the treatment of a wide range of ailments including syphilitic skin diseases and cancers, bacterial dysentery, colds, enteritis, pain, swelling etc.
Experimentally, the flower extracts have been shown to lower blood cholesterol levels and are antibacterial, antiviral and tuberculous static.
Externally the flowers are applied as a wash for skin inflammations, infectious rashes and sores.
The plant has a similar action to Forsythia suspensa and is usually used in combination with that species to achieve a stronger action.
Among the other uses of the Lonicera japonica we mention the agroforestry ones.
It is in fact a very vigorous climbing plant, it is a good dense ground cover plant where it finds space on the ground, even if it tends to suffocate other plants.
Among other uses the plant is said to be insecticidal and the stems were used to make baskets.

Preparation Method –
The stems of Lonicera japonica are harvested in the fall and winter and dried for later use.
The flowers are harvested early in the morning before they open and are dried for later use.
For edible use, the blanched leaves are used as a vegetable although some caution is advised, due to the toxicity of this plant described above.
The flowers are sucked for their sweet nectar and used as a vegetable or made into syrup and puddings.
A tea is made from the leaves, buds and flowers.