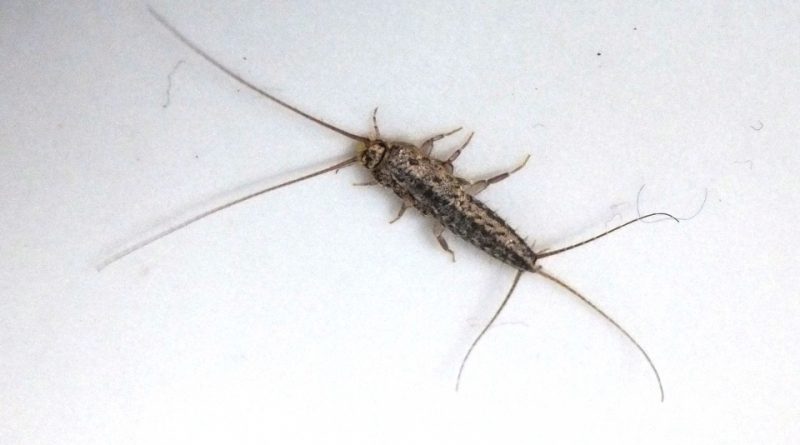 Geographic Distribution and Habitat –
The Firebrat is a small, deadly insect that prefers closed, warm and humid environments and can be found in domestic environments or, more frequently, in bakeries, generally near heat sources such as ovens.
They are distributed in almost all parts of the world and are normally found outdoors under rocks, leaf litter and similar environments, but are also often found indoors where they are considered pests.

Morphology –
Thermobia domestica is an apterous insect with an elongated body (1 – 1.6 cm) and flattened in the dorsal-ventral direction, with greater width in correspondence with the thorax. The integument shows a spotted pigmentation due to the presence of brown scales. Like all Tisanuri, it is primitively apathetic.
The antennae are long and filiform and the abdomen ends with two long filiform cerci and with the eleventh urite, or telson, also long and filiform. Compared to silverfish, the antennae and cerci are markedly longer: the antennae are about twice as long as the rest of the body and the cerci approximately as long as the body, except for the telson.
The nymphs are morphologically similar to the adults but smaller in size.
It is somewhat similar to the better known silverfish (Lepisma saccharina), compared to which it has slightly larger dimensions.

Attitude and Life Cycle –
The females of this insect, having reached the age of 1.5 – 4.5 months, begin to lay eggs when the temperature reaches (32-41 ° C); deposition takes place inside cracks. They can lay a hundred eggs and, overall, during their life, of about 3-5 years, up to 6000 eggs.
After incubation, which lasts 12-13 days, the nymphs hatch. They can reach maturity in just 2-4 months, thus being able to have several generations each year.

Ecological Role –
The Firebrat is an insect with nocturnal habits; it is lucivago and commensal of the man associated with domestic environments.
The populations of this insect never reach significant quantities, as they are composed of small communities of a few individuals and in most cases do not constitute damage factors. Any infestations can be fought with common synthetic pyrethroid-based insecticides available on the market for civil uses but the best conditions are those in which the corners and crevices of the premises and houses are periodically cleaned and the periodic removal and cleaning is carried out. of objects (books, furnishings, etc.) in which they nest.
While they do not cause serious damage, they can still contaminate food, damage paper and stain clothing.
Thermobia domestica feeds on a wide variety of carbohydrates and starches which are also protein sources such as dog food, flour and bindings.