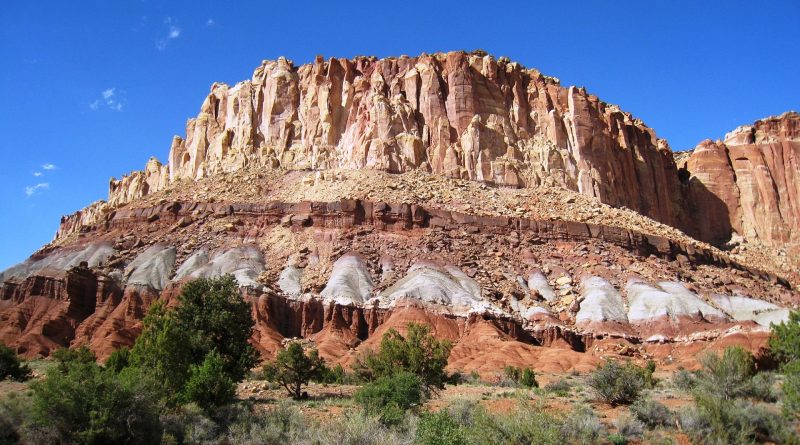 Capitol Reef National Park, whose WDPA code is: 2511, is a United States National Park located in the state of Utah.
This park has an extension of 979 km² and is managed like other parks in the United States by the National Park Service.
Capitol Reef National Park is located in the south of the state of Utah and stretches for over 160 km in length but has a rather narrow conformation. The park was established in 1971 and is open to visitors all year round.
Capitol Reef National Park is considered “one of the best kept secrets” of Utah, in fact, despite its extraordinary peculiarities, it does not register the crowds of visitors that instead fill the other parks of the state, thus remaining an oasis appreciated by those who they flee mass tourism.
The reason for this lower turnout is however to be found in the scarcity of accesses and in the poverty of asphalted roads that allow the crossing of the park which remains mostly explored with four-wheel drive vehicles and limited to the dry season.

Geology –
The geological history of Capitol Reef can be divided into three phases, each of which occurred over a geological time of millions of years: deposition, uplift and erosion.
The deposition phase created over 3,000 meters of sedimentary layers that were deposited in the area.
These rocks vary in age from the Permian (of 270 million years) to the Cretaceous (of 80 million years). As the Waterpocket Fold tilted this geological layer cake to the east, the oldest rocks are found in the western part of the park, and the younger rocks are found near the eastern boundary.
This sequence of layers upon layers of sedimentary rock records nearly 200 million years of geological history. The rock strata of Capitol Reef reveal ancient environments as varied as rivers and swamps (Chinle Formation), Sahara-like deserts (Navajo Sandstone), and shallow oceans (Mancos Shale). Fossils found in these rocks provide further clues to these ancient environments and inhabitants. These ancient sediments were deposited when the region was at or near sea level, far below the current elevation.
The lifting phase began long after the sedimentary rocks were deposited; during this era the entire region rose hundreds of meters due to large-scale plate tectonic forces. Most of the Colorado Plateau has been raised relatively evenly, keeping the layers roughly horizontal, creating the “layer cake” look common throughout the region (like the Grand Canyon). Capitol Reef is a gigantic exception to this model, thanks to the Waterpocket Fold.
The Waterpocket Fold is in fact a geological barrier (monocline) a hundred miles long and which gives its name to the entire park that encloses it in its entirety including also the lateral branches, with the spectacular and colorful rocky walls, the isolated monoliths and the canyons converging towards the collecting basins.
As with other Utah parks, there is no shortage of natural arches.
The easiest part of the Waterpocket Fold to reach, which is near the Fremont River, is known as Capitol Reef: capital for the white domes of Navajo Sandstone which resemble capitol domes and coral reef for the rocky cliffs which are a barrier to travel, like an ocean cliff. 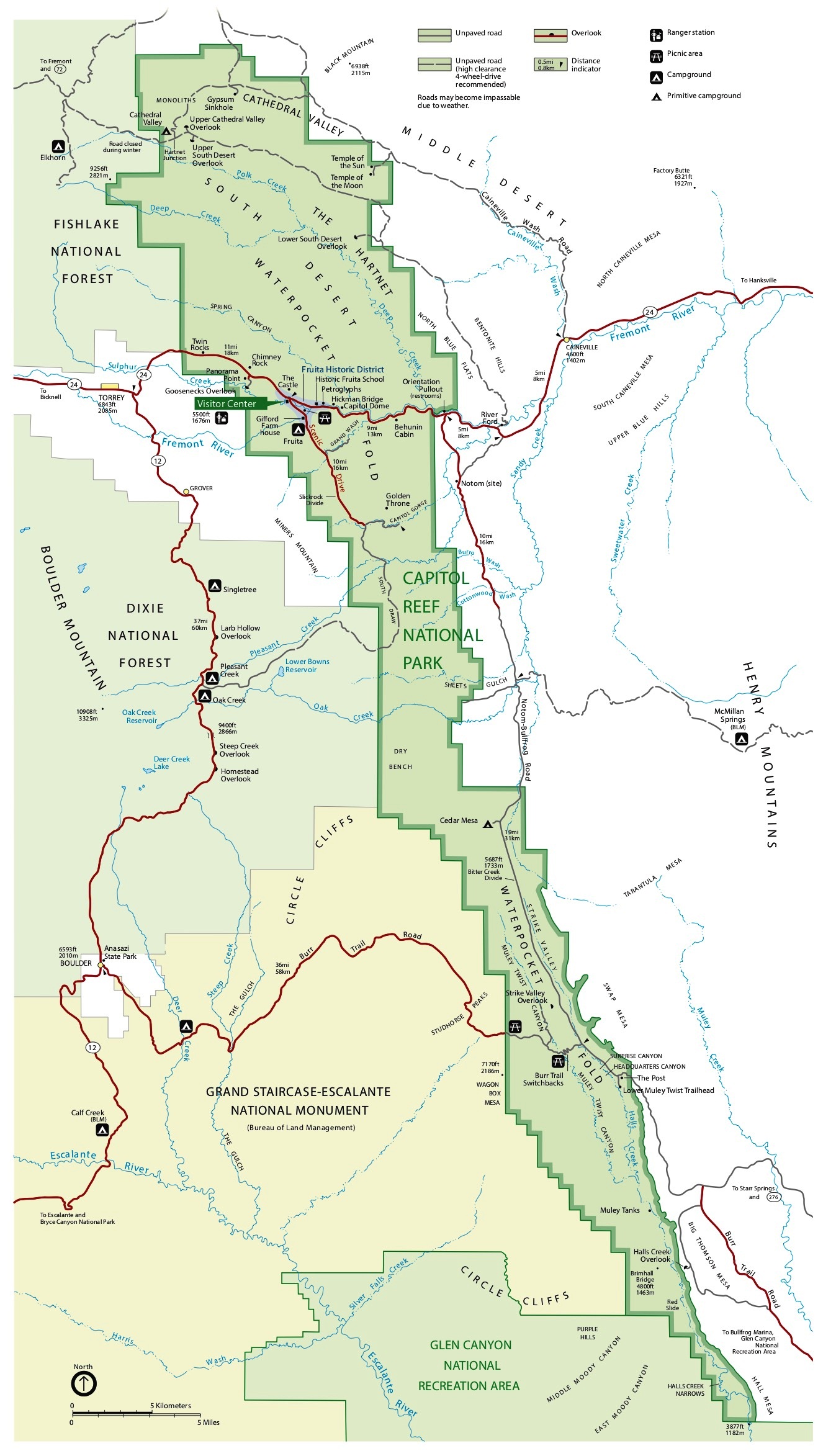 Flora –
The Waterpocket Fold defines Capitol Reef National Park. A curvature of over 160km in the earth’s crust, the Waterpocket Fold is a classic monoclinic: a regional fold with a very steep side in an area of ​​otherwise nearly horizontal layers. The varied topography, geology, elevation, and rainfall patterns along the Waterpocket Fold have resulted in a diversity of micro habitats and niches for plant species. Nineteen geological formations are exhibited within the Waterpocket Fold, each with unique combinations of minerals, soil types, appearance and slope.
Elevations in the park range from 1,219m in the Southern District near Hall’s Creek to over 3,353m in the Northern District near Thousand Lakes Mountain. This elevation gradient results in an increase in annual rainfall from the south to the north end of the park. The combination of elevations and wide-ranging rainfall, along with the diverse geology and topography, allows for the existence of 85 vegetation associations in Capitol Reef National Park. There are over 840 plant species in the park, many of which have very narrow distributions, which vegetate on specific geological formations, soils, slopes or ranges of elevation or precipitation. Capitol Reef National Park has more than 40 rare and endemic plant species, six of which are federally listed as threatened or endangered.

Fauna –
Within the Capitol Reef National Park we find more than 230 bird species. Some species are seasonal residents, others pass by during migration, and some make it their home all year round. Popular birding spots in the Fruita area include the Fremont River Trail which passes camping and orchards, the trees around the Ripple Rock Nature Center, the picnic area, and riparian vegetation along Sulfur Creek.
Trips to the northern and southern parts of the park can offer the opportunity to see birds in other types of vegetation, including desert grasslands, desert shrubs, and pine and juniper woodlands.
In this park we also find amphibians. Amphibians are cold-blooded animals that typically experience a phase of aquatic gill respiration followed by a phase of terrestrial lung respiration. Amphibians include frogs, toads, salamanders, and newts. Capitol Reef National Park is home to five species of amphibians, all of which are frogs or toads. These animals rely on the often scarce desert water and can be seen in or near streams, rivers, springs and ephemeral pools, also known as reservoirs or pockets of water.
The diverse geology of Capitol Reef National Park also offers diverse habitats for numerous animal species. Fifty-eight mammal species have been documented in the park. This includes sixteen species of bats; other small mammals such as mice, wood rats, squirrels; and large mammals such as deer, coyotes and pumas.
As for reptiles, which are typically cold-blooded vertebrates that breathe air through their lungs and have scales, including snakes, lizards, turtles, and alligators, some of these live in the park. Snakes and lizards are the only reptiles residing in Capitol Reef National Park. As ectotherms (cold-blooded animals), reptiles rely on the heat of the environment and thus become inactive during the cold winter months. During this period of seasonal inactivity, snakes and lizards take refuge in rocky crevices or underground tunnels and their metabolic rate decreases, conserving energy.
Finally the fish. Much of the Capitol Reef National Park region is considered “high desert”, with an average of 20.3 cm of rainfall per year. Despite this classification, there are some perennial and year-round water sources, such as the Fremont River and Sulfur Creek, that can support fish populations. The park is home to several species, some indigenous and others non-indigenous or introduced.
Non-native species are those that live outside their native range or typical habitat. Non-native animals that spread to natural areas and aggressively compete with native species for resources are referred to as invasive. Invasive species can replace native species, disrupt food chains and alter nutrient cycles.