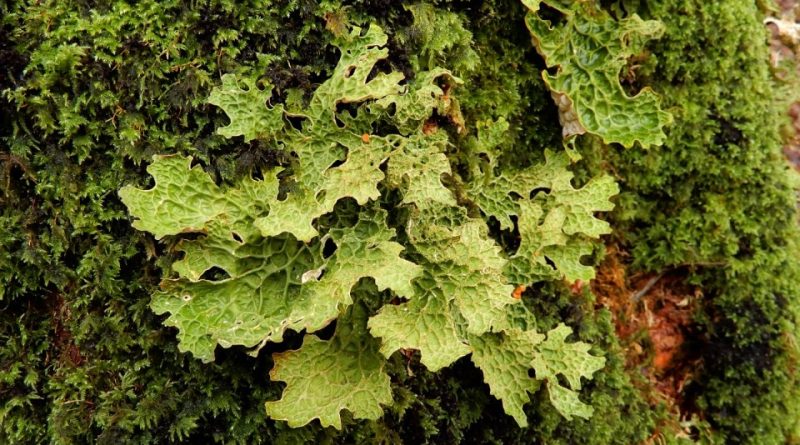 Etymology –
The term Lobaria is the union of the two Latin words lob and aria.
The specific pulmonary epithet comes from púlmo, pulmónis lung: reminiscent of the lungs, due to its color, texture or because it is considered useful in the treatment of lung diseases.

Geographic Distribution and Habitat –
Lobaria pulmonaria is a lichen with a wide distribution in Europe, Asia, North America and Africa. It is a predominantly temperate, olarctic species, present on bark, epiphytic and epilithic mosses, in humid forests, currently with optimum in the mountain belt; widespread in Europe throughout the Alps, but probably in decline.
Its preferential habitats are humid ones with high rainfall, especially in coastal areas. It is also found in wooded pastures and usually grows on the bark of deciduous trees such as oaks, beeches and maples but also grows on rocks. It is the most widespread and most common species of Lobaria in North America.
In Europe it is present from the mesomediterranean belt (potential vegetation: evergreen broad-leaved woods dominated by Quercus ilex) to the mountain belt (potential vegetation: broad-leaved woods dominated by Fagus sylvatica and closed conifer woods with Picea abies).
In Italy, despite being a rare species, it can also develop along the coast in the presence of high humidity: its presence is documented in central Italy at altitudes between 130 and 150 meters, in Sardinia in the woods between Marghine and Goceano.
This species is associated with the oldest forests and its presence and abundance can be used as an indicator of the age of the forest, in some bioclimatic areas. 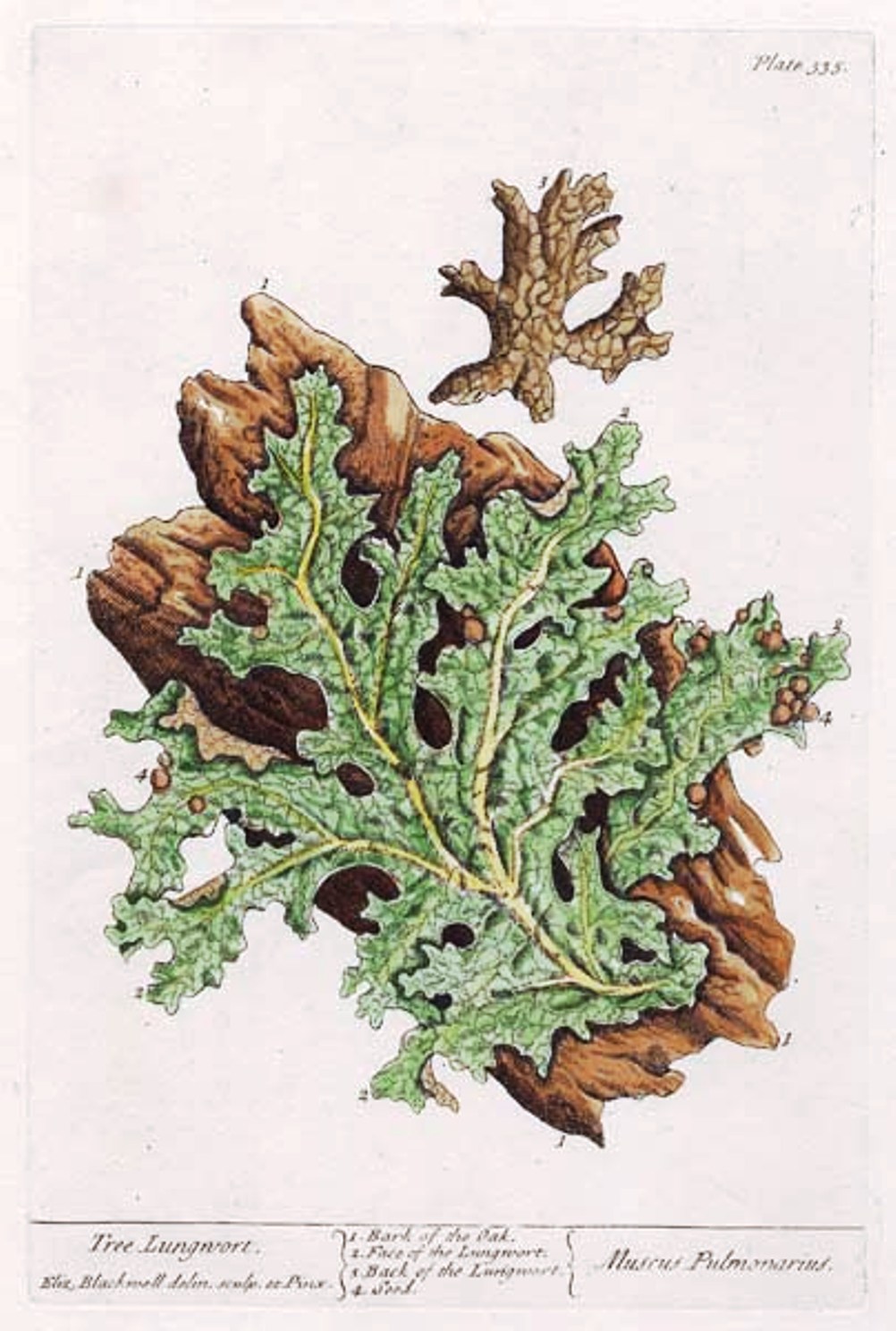 Description –
Lobaria pulmonaria is a leafy lichen and its thallus is green, leathery and lobed with patterns of ridges and depressions on the upper surface. The color is bright green in humid conditions and turns brownish and papery when dry. This species often has a thin layer of hair, a tomentum, on its lower surface.
The bark, the outer protective layer on the surface of the thallus, is roughly comparable to the epidermis of a green plant.
The thallus is typically 5-15 centimeters in diameter, with individual lobes 1-3 centimeters wide and up to 7 cm long.
On the surface of the thallus there are asexual reproductive structures, soredi and minute isidia, 0.5-1.5 mm in diameter and cephalodia, which are pustules of cyan bacteria, which are often present on the lower surface of the thallus; these spots are considerably darker than the green surface of the thallus.
Like other leaf lichens, the thallus is only loosely attached to the surface on which it grows.
Lobaria pulmonaria has the ability to form both vegetative propagation and sexual propagules at the age of about 25 years.
In sexual reproduction, the species produces small reddish-brown discs known as apothecia containing ascus, from which spores are forcibly released into the air (such as ballistospores). Based on ascospore germination studies, it has been suggested that L. pulmonaria spores use a mechanism to inhibit germination: inhibition is eliminated when the spores are grown in a synthetic growth medium containing an adsorbent such as albumin bovine serum or α-cyclodextrin.

Cultivation –
Tree lungwort is characterized by a cycle in which dispersion occurs by means of vegetative propagules (via soredia or isidia).
In this method, the protruding propagules become dry and brittle during the regular wet / dry cycles of the lichen and can easily crumble from the thallus. These fragments can develop into new thalli, either in the same place or in a new site after being dispersed by wind or rain.
Numerous steps are required for the development of vegetative propagules, including degeneration of the thallus cortex, replication of green algae cells, and intertwining of fungal hyphae with green algae cells.
These steps lead to an increase in internal pressure which eventually breaks through the cortex. Continued growth causes these granules to be pushed up and out of the surface of the thallus.
Occasionally it can adapt to live on rocks with moss and on soil, in areas with high humidity. Very slow growth and development (tens of years) make this particular lichen fragile, and its areas are very limited: a cut to a portion of the forest can cause the disappearance of an entire station due to the low number of trunks it colonizes (also due to the slowness of its life cycle).
Lobaria pulmonaria was grown in the laboratory on nylon microfilaments. Various environmental factors are believed to affect the distribution of L. pulmonaria, such as temperature, humidity (average humidity, speed and frequency of wet-dry cycles), exposure to sunlight and air pollution levels.
Attempts to quantitatively assess the contribution of these factors to lichen growth are difficult because differences in the original environment from which lichen thalli are harvested will greatly affect heat and drying tolerances.

Customs and Traditions –
Lobaria pulmonaria is a large epiphytic lichen consisting of an ascomycete fungus and a partner of green algae that live together in a symbiotic relationship with a cyanobacterium, a symbiosis involving members of three kingdoms of organisms. Commonly known by various names such as arboreal lungwort, lung lichen, lung moss, lung lichen, oak lung, or oak lungwort, it is sensitive to air pollution and is also damaged by habitat loss and changes in forest practices. Its population has declined across Europe and L. pulmonaria is considered endangered in many lowland areas. It is threatened in many parts of the world, especially in the lowlands of Europe, and the decline has been attributed to industrial forestry and air pollution, particularly acid rain.
The species has a history of use in herbal medicines and recent research has confirmed some medicinal properties of lichen extracts.
Lobaria pulmonaria is known to contain a variety of acids common to lichens, such as constipation acid, desmethylstichic acid, gyrophoric acid, tenuiorin, costitic acid, norstitic acid, peristictic acid and l methylnorstitic acid. These compounds, collectively known as depsidones, are known to be involved in defense against grazing herbivores such as lichen-feeding mollusks.
It also contains sugars such as D-arabitol, volemitol, as well as various carotenoids (total content> 10 mg / kg), such as alpha carotene, beta carotene and beta cryptoxanthin.
The upper cortex of the lichen contains melanins which shield the UV and PAR radiation of the photobiont.
The synthesis of melanin pigments in lichen increases in response to increased solar radiation, and shade-adapted thalli are greenish-gray in the dry state in air, while sun-exposed thalli may be dark brown in color. This adaptation helps protect the photosymbiont D. reticulata, which is known to be relatively intolerant to high light levels.
The presence of various steroids are also known, namely ergosterol, episterol, fecosterol and lichesterol.
This lichen is used in the medicinal field.
Its shape somewhat resembles the tissue inside the lungs and therefore was thought to be a remedy for lung diseases based on the doctrine of signatures. It is still used for asthma, urinary incontinence and lack of appetite.
In India it is used as a traditional medicine to treat bleeding and eczema, and is used as a cough remedy with blood by the Hesquiaht in British Columbia, Canada.
An ethnophytotherapy investigation in the upper Molise of central-southern Italy revealed that L. pulmonaria is used as an antiseptic and is rubbed on wounds.
Furthermore, a hot water extract prepared using this species has been shown to have anti-inflammatory and ulcer prevention activities.
Furthermore, methanol extracts have a protective effect on the gastrointestinal system of rats, possibly reducing oxidative stress and reducing the inflammatory effects of neutrophils.
Finally, the methanol extracts also have a powerful antioxidant activity and reducing power, probably due to the presence of phenolic compounds.
Among other uses, it should be remembered that Lobaria pulmonaria was also used to produce an orange dye for wool, in leather tanning, in the production of perfumes and as an ingredient in the production of beer.

Preparation Method –
Tree lungwort is used more or less like Icelandic lichen but is less well known and less in demand. In any case, being a species very sensitive to pollution and habitat loss, it is running the risk of extinction so its collection is not recommended.