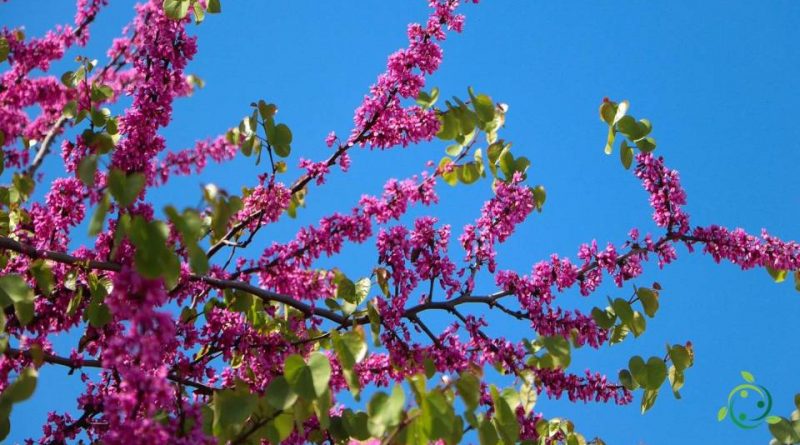 How the Judas tree is grown

The Judas tree or siliquastro (Cercis siliquastrum, L. 1758) is a plant belonging to the Fabaceae family native to the whole Mediterranean basin and Southern Europe, up to the coasts of the Black Sea. It is found in the bush, preferably on calcareous soil, up to 300-400 meters above sea level, together with holm oak, downy oak and hackberry. In Italy it is present, generally in bushy formations, and in all regions up to the Prealps.
Its reproductive structures are hermaphrodite flowers, gathered in sessile cluster inflorescences (4-6). They are present all over the plant and have a purplish-pink color; there are also white-flowered varieties (alba). It blooms in the months of March and April, before the appearance of the leaves. The fruit is an elongated and flattened legume, initially with reddish hues then brown when ripe. 8-12 cm long and persists on the plant throughout the winter. The lenticular seeds are dark brown.
In old age it can even reach 8 m, although usually its dimensions are smaller: between four and five meters.

Cultivation –
The Judas tree is a plant that needs full sun exposure, possibly protected from winds. This plant prefers lowland areas with mild climates.
From the pedological point of view, it prefers calcareous, well-drained soils with a good content in skeleton and however adapts well to any terrain.
The planting of Cercis siliquastrum must be carried out in the period of October.
Multiplication occurs through seeds, which the plant produces in abundance. The sowing period is in March, in containers filled with seed compost. When the seedlings reach an adequate size they are planted in pots of about 10 cm in diameter, which are buried outdoors, in the nursery. Usually, before being transferred to the home, the seedlings must be kept in the nursery for about two years, or even more.
As for pruning, this plant should be pruned only in case of obvious damage to the branches due to cold and frost. In this case, pruning can also be drastic. It is necessary to remove the parts that are dry or damaged by frost, as well as the branches burned by the cold.
Furthermore, since the plant tends to bloom even on very old trunk and branches, their elimination could block flowering forever. To prevent pruning from causing irreparable damage, it is advisable to proceed after flowering, when the productive branches are more easily recognizable. Pruning the plant after the appearance of the flowers, on the other hand, will further thicken the foliage with the appearance of new productive branches.
Like other legumes, it is a plant capable of nitrogen fixing, that is, it captures nitrogen from the atmosphere and, thanks to bacteria located in the roots, releases it into the soil, enriching it.

Uses –
The Judas tree is a popular ornamental species widely used for street furniture and parks due to its beautiful spring flowering and its resistance to the city atmosphere. It lends itself very well to the trees of the city avenues as it is very resistant to pollution.
Its wood is of a reddish color veined with dark; it is hard and is used in cabinet making.
The flowers are edible and can be used in cooking in the preparation of recipes.