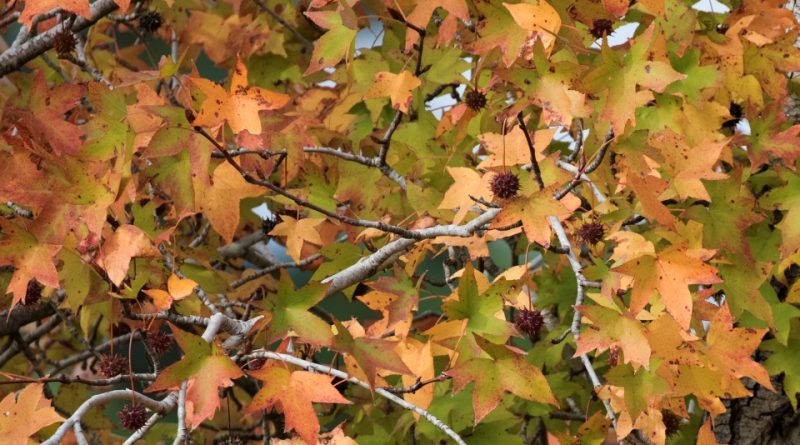 The Oriental Sweet Gum (Liquidambar orientalis Mill.) Is an arboreal species belonging to the Hamamelidaceae family.

Etymology –
The term Liquidambar comes from liquidus liquid and from the Arabic ambar amber: reference to the scented resin produced by the tree.
The specific epithet orientalis comes from sol orientis the rising sun and therefore the east itself: from the east, eastern, indication of the distribution area.

Geographic Distribution and Habitat –
Liquidambar orientalis is a deciduous tree native to the eastern Mediterranean region, which occurs in pure wood formations mainly in the alluvial plains of southwestern Turkey and on the Greek island of Rhodes.
Its habitat is the forests of this endemic taxon, relict of the Tertiary, which are found in particular within a specially protected area between Dalyan and Köyceğiz in the province of Muğla, where an area of ​​286 hectares is intended as a nature reserve and arboretum for the conservation of the species. One area where it is present is the one that also surrounds Marmaris. These two areas are the best known Liquidambar orientalis forests because their respective regions are also important tourist centers, although a large population covering nearly 100 hectares is also found in an inland region of Aydın province which extends between Çine, Köşk and districts by Umurlu. Yet another area of ​​protected forest of this species, of 88.5 hectares, is located in the Bucak district, dependent on Burdur, along the reservoir of the Karacaören dam on the road to Antalya.
The trees are also found locally in the Denizli secondary districts of Beyağaç and Tavas. The total area of ​​pure Liquidambar orientalis forests in Turkey covers 1,348 hectares, all in the southwestern regions of the country. However, the current extent has decreased from the 1940s level of 6,000-7,000 hectares, although protective measures and infrastructure in place since the 1980s have helped stop habitat loss and have led to minor improvements. 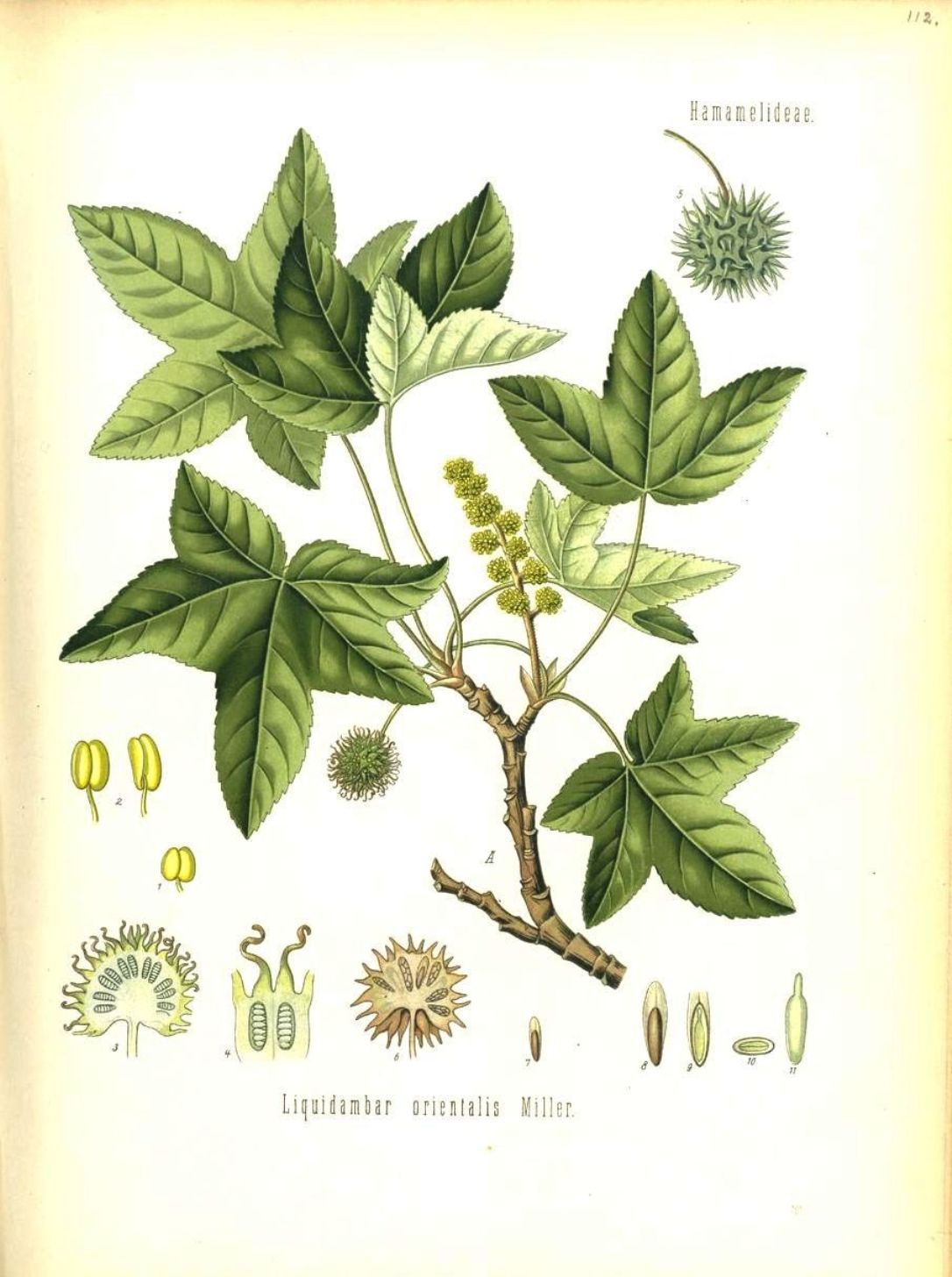 Description –
Liquidambar orientalis is a deciduous tree, 30-35 m tall with a trunk that can reach 100 cm in diameter.
The leaves are similar to those of the maples and the plant is very attractive and particularly appreciated for its colorful autumn leaves.
The flowers are unisexual and bloom from March to April.
The fruits ripen from November to December and the seeds are dispersed by the wind.

Cultivation –
Liquidambar orientalis is a plant that grows to a height between 0-400 m with an average annual rainfall of 1,000-1,200 mm and an average annual temperature of 18 ° C. The optimal growth of the tree occurs on rich, deep soils. and humid such as swamps, river banks and coastal areas, but is also capable of growing on dry slopes and soils.
It is a slow growing plant and young plants are susceptible to damage from late frosts.
Mature plants, on the other hand, are completely resistant but prefer a warmer climate to grow well.
An aromatic gum exudes from the trunk of these trees. The fragrance is also present to some extent in the leaves, especially if they are pounded.
It is a plant that does not tolerate transplanting so it should be planted directly in its final position.
Propagation occurs by seed which is sown as soon as it is ripe in autumn in a cold greenhouse. Stored seeds require 1 – 3 months stratification and sometimes take 2 years to germinate. Germination rates are often low. It is recommended to place the seedlings in individual pots, in an unheated greenhouse, for their first winter when they are large enough to handle and grow them. Since they suffer from root ailments, it is best to plant them in their permanent locations in the early summer of their second year and give them some protection from the cold for their first winter outdoors.
The plant can also be propagated through semi-mature wood cuttings, in the mid-summer period.

Customs and Traditions –
The extraction of Liquidambar orientalis (storax) sap and the production of an oil based on it (sığala yağı), as well as the exports of these products, play an important role in the local economies of Greece and Turkey.
Collecting the sap and preparing the oil involve rather strenuous tasks that last from May to November and consist of several separate phases. The dense sap is obtained in the period from June to September by gradually stripping ¼ of the total trunk in the longitudinal direction. These incisions bring out the lymph, which can be further stimulated by tapping on the trunk. In the village of Kavakarası near Köyceğiz in the Turkish province of Muğla, locals scrape the sap from the trunks of injured trees using the sharp edge of plastic bottles. The stripped sap is placed in boiling water to soften it, then pressed. The product is then diluted with ¼ of water, keeping it soft and preserving its aroma. A light yellow oil is obtained by steam distillation.
Unfortunately, there is a danger that the current generation of these workers will not be replaced in the near future.
The oil obtained from Liquidambar orientalis and diluted with a suitable carrier oil, is used externally in traditional medicine.
Among the edible uses it should be remembered that from the resin a chewing gum and a stabilizer for sweets, etc. are obtained.
This resin is also used to flavor baked foods, etc.
Liquidambar orientalis also has medicinal uses.
The resin obtained from the wood and the inner bark acts both as an irritant and as an expectorant within the respiratory tract. It is one of the ingredients in ‘Friar’s Balsam’, an expectorant blend that is inhaled to stimulate a productive cough.
This resin is applied externally to the skin to treat a number of diseases.
The resin is also mixed with Hamamelis virginiana and rose water to create an astringent face lotion.
The resin is antibacterial, anti-inflammatory, antiseptic, expectorant and stimulant.
It is taken internally to treat strokes, childhood convulsions, coma, heart disease and itching. It is also used in the treatment of cancer.
For external use it is mixed with oil and used to treat scabies, wounds, ulcers, etc.
Among other uses, the resin is used to produce incense, perfumery, soaps, etc. It is also used as a pesticide.
The liquid resin gives greater permanence to the odors of the flowers extracted by maceration. It is also used in the imitation of other perfumes as an alternative to vanilla, ambergris and benzoin, or to complement them.
In addition, the aromatic bark is burned like incense.

Preparation Method –
Oriental Sweet Gum is a plant that is used both for industrial purposes, especially in perfumery, and for food and medicinal uses.
For these products the bark is harvested in the fall and the resin is extracted from the bark.
The leaves, fruits and roots are also used in a similar way to the resin and are also considered as antidotes, parasiticides and vulneraries.