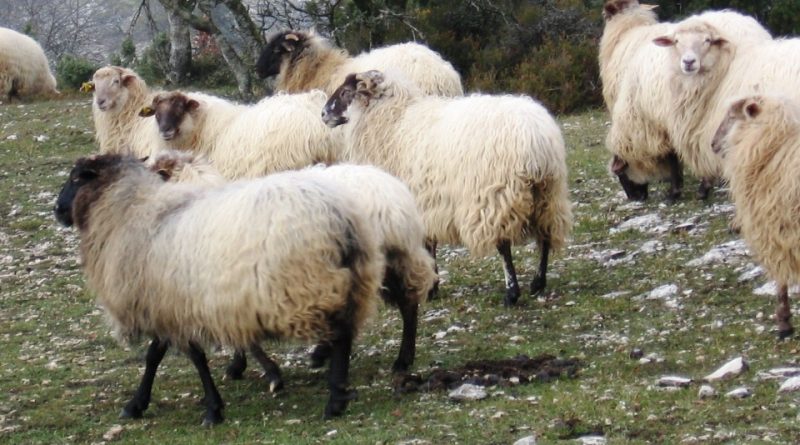 The Latxa sheep is a Spanish sheep breed (Ovis aries Linnaeus, 1758) typical of the Basque Country and Navarre, with an aptitude for milk production.

Geographic and Area Distribution –
The Latxa is a breed originating from the Basque Country of Spain. Mostly bred in the provinces of Biscay, Gipuzkoa and Navarra.

Origins and History –
The Latxa breed is one of the long-haired breeds of sheep of the Basque Country and Navarre, which did not cross with Merino cattle blood due to the ban on imports of exogenous animals. For a long time it was bred in the provinces of the Basque Country (Bizkaia, Araba and Gipuzkoa) and Navarre.
It is a breed that has been bred for some time by moving the flock to the mountain pastures in the summer, after the sheep have finished lactation, while the production of the cheese takes place on the farm.

Morphology –
The Latxa sheep breed is characterized by having a very long fleece, almost to the ground, of harsh wool (“latxa” means “sour” in Basque) and fat, suitable for the local climate belonging to humid Spain. The hair on the head is short and black or reddish in color.
These sheep have a straight profile and medium size with a weight that in males is around 75 kg and in females around 55 kg.
The coat is white and with thick wool; they can have horns in both sexes.
Within this breed there are two different varieties that differ in the shape and coloring of the face and extremities:
– Latxa de Cara Negra (black face): includes the most important fraction of the census. Characterized by the dark color of the head and limbs. In areas of Navarre, females have horns as features and males too. In the Basque Country, females do not have horns and males have them indiscriminately.
– Latxa de Cara Rubia (blond face): the color of the head and limbs varies between red and white with slight shades of blond. The females do not have horns and the males indiscriminately.
In addition, the black-faced latxa has a rump height of 75 cm, the blond-faced one 65 cm.

Productive attitude –
The Latxa sheep is mainly raised for the production of milk which is used for the creation of the PDO Idiazábal cheese.
This breed produces approximately one liter of milk per day for a period of 140 days for LCN (black) and 155 days for CSF (reddish). Lambs are weaned very early in order to preserve the milk for making cheese. They are sold to breeders and initially fed with powdered milk and, at the end of the summer, with mountain fodder, producing very tasty meat animals. Lambs are born with great weight, as the gestation is long (154 days). This means that 30-40% of deliveries are dystocia.
Idiazábal PDO is a pressed fat cheese made from whole milk from Latxa (Lacha) and Carranzana sheep.
Idiazábal PDO has a cylindrical shape, the rind is hard pale yellow or darker for smoked cheese. The paste is compact and yellowish white with small holes. The not too aged cheese is creamy and with a slight characteristic aroma of sheep’s milk, while the more aged version gives a delicate aroma of beech, birch and hawthorn, due to the smoking process.
The production area of ​​Idiazábal PDO covers the territories of Álava, Vizcaya, Guipúzcoa, in the autonomous community of Pais Vasco; and the autonomous community of Navarre with the exception of El Valle del Roncal.
In addition, some flocks are moved while they are still lactating, with the animals being milked by hand on the high pastures. Since 1982, a breeding regime has been introduced and new production methods have been tested. Artificial insemination is being used to provide earlier calving and extend the breeding season, and mechanical milking is taking the place of manual milking. The pasture is still used as a “free” resource, and the sheep do not compete with the cattle and horses that graze the flatter areas, because the sheep prefer herbaceous plants on more sloping land.