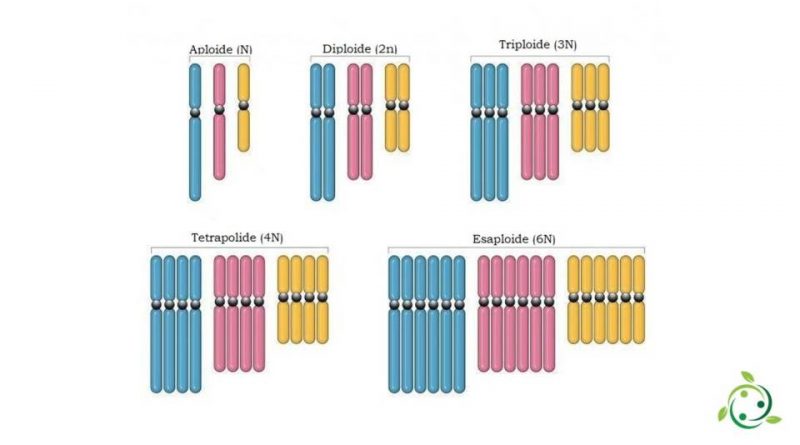 The term polyploidy means the condition in which a living organism has more than 2 chromosomal sets, that is, it has a number of chromosomes higher than the diploid set. In polyploidy, therefore, the number of chromosomes can be 3n, 4n, 5n etc., and we then speak of triploidy, tetraploidy, pentaploidy, etc. If there are one or more chromosomes more or less than normal (2n + 1, 2n − 1, 2n + 2, 2n − 2 etc.), we have aneuploidy or heteroploidy. Polyploidy can be somatic or germinal. In somatic polyploidy only some cells, mostly glandular, have polyploid nuclei. If the chromosomes, after dividing, do not separate but remain united to each other, we have polythenia. True polyploidy, in which all the cells of an organism are polyploid, can originate in two ways: by fertilization of gametes that are not haploid; by doubling the number of chromosomes at the beginning of development. If, due to some anomaly of meiosis, a diploid gamete is formed, this, joining with a normal haploid gamete, gives rise to a zygote with 3n chromosomes, ie triploid. Triploid organisms often form a certain number of diploid gametes: if 2 of these fertilize, a tetraploid is born, 4n. The doubling of the number of chromosomes can occur due to the suppression of the mitotic spindle which does not inhibit the division of chromosomes. Polyploidy is often associated with parthenogenesis in animals. During ovogenesis there is an abortive meiosis that does not lead to a reduction in the number of chromosomes. Polyploid organisms behave very differently depending on whether the coefficient by which n is multiplied is odd or even. In the first case, in gametogenesis it is not possible to have balanced meiosis, because the chromosomes do not pair up regularly in pairs; the result is an irregular distribution of chromosomes among the gametes, most of which are sterile. Only those in which by chance there are exactly n or 2n chromosomes are fertile. Plants can generally maintain this condition by reproducing vegetatively. In animals, on the other hand, parthenogenesis is the only possible way of reproduction that maintains this polyploid condition. Polyploids in which the coefficient n is even, on the other hand, can in many cases give rise to balanced meiosis, and therefore the polyploid condition can also be perpetuated through the path of sexual reproduction. However, very often these organisms also reproduce asexually or parthenogenetic. From the point of view of the origin of the chromosomal sets, autopoliploids are distinguished, in which there is reduplication of the same chromosomes of a given species or race, and allopolyploids, in which the chromosomal sets have a different origin.
In the plant world, polyploidy affects many plants.
Many succulents are polyploid, as well as ornamental, seed and many fruit trees. Polyploidy, in many cases, is associated with infertility, due to the difficulty in pairing chromosomes during meiosis. The most visible effect of this condition is the lack of seeds in edible fruits, such as bananas (3n).

In the animal world, polyploidy is present in some species such as: freshwater fish, crustaceans, worms, lizards and some insects, in which polyploidy is common because it is associated with parthenogenetic reproduction. In animals in which reproduction is sexual, however, it is very rare or almost impossible for it to occur. In animals that reproduce by parthenogenesis and therefore meiotic control is absent, it is easier to face the doubling of chromosomes with the formation of a polyploid kit. Conversely, animals that reproduce sexually form, as a rule, haploid gametes and diploid zygotes. One of the causes of the formation of the 4n zygote could be the fertilization of two diploid gametes, produced by mistake of the meiosis of both parents (extremely remote eventuality). Given the impossibility of self-fertilization in animals, it is evident that this is only feasible in plants.
Polyploidy is also present in the human species.
This typically occurs only in some cell lines, for example, myocardial cells, bone marrow megakaryocytes, hepatocytes, etc. It affects about 1% of conception and accounts for 6% of spontaneous abortions caused by chromosomal abnormalities. In fact, this chromosomal structure is very unfavorable for the development of the embryo, so pregnancy usually stops spontaneously at a very early time. The most common polyploidy in humans is 3n triploidy (69 chromosomes) with a frequency of about 1 in 10,000 cases at birth.
Polyploidy can be induced by experimentally altering the mitotic spindle apparatus during cell division. This result is achieved with the use of colchicine, an alkaloid isolated from the seeds of autumn Colchicum, which, added during the cultivation of plant cells, inhibits the formation of the spindle with consequent blockage of mitosis.