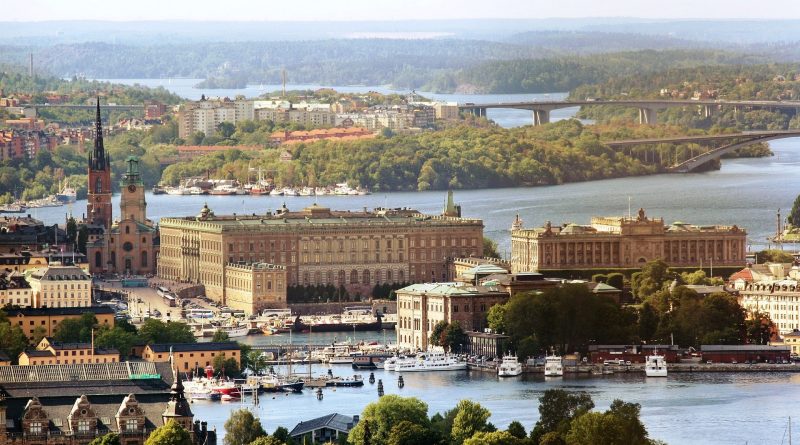 Sweden, whose area is 450 295 km², is a state of the European Union, located in the Scandinavian peninsula, with a total population of 10,302,984 inhabitants as of 31 August 2019.
The capital of Sweden is Stockholm with 952,058 inhabitants as of 2018.
Sweden borders Norway to the west and Finland to the north-east; it is bathed by the Baltic Sea and the Gulf of Bothnia to the east, and the Straits of the Skagerrak and Kattegat to the southwest; the Øresund strait, which separates Sweden from Denmark, has been crossed since 2000 by the bridge of the same name which connects the two countries respectively between Malmö and Copenhagen.
Sweden is a parliamentary monarchy that joined the European Union on 1 January 1995.

Geography –
The territory of Sweden is mainly mountainous towards the west, where the Scandinavian Mountains are located that separate the country from Norway. It is a mature relief, dating back to the Caledonian orogeny, therefore characterized by rounded shapes, with the exception of some reliefs exacerbated by glacial erosion. The strictly mountainous area (which culminates in the 2103 m of the Kebnekaise) gradually slopes down to a vast, particularly extensive plateau in the north of the country, yielding to the alluvial plains near the coasts.
On the other hand, the central part of the country, Svealand (from the name of the ancient inhabitants, the “Svear”) is flat as well as the southernmost Götaland (“land of the Goths”): in these regions there are many lakes, the largest of which they are the Vänern, the Vättern and the Mälaren. These are also the most cultivated areas, thanks to the not too continental climate, also softened by the lake extensions.
The main islands of Sweden are Gotland and Öland, both in the Baltic Sea: in reality all the Swedish coasts are characterized by a myriad of small islands, residues of glacial and paraglacial activity, and often in rapid rise due to postglacial eustatism. The capital itself, Stockholm, stands on hundreds of islands connected to each other and to the mainland by a myriad of bridges.

Climate –
Sweden is characterized by a climate considerably influenced by the proximity of the Baltic Sea and the Atlantic Ocean, despite the fact that the country extends for more than 13 ° in latitude and that a part of it is located beyond the Arctic Circle; confirmation of all this is the positive thermal anomaly which corresponds to Stockholm at 13 ° C and in the Gulf of Bothnia at 14 ° C in January; however, the decrease in the beneficial oceanic influence is very sensitive towards the interior even near the coast.
In this country, the average annual temperature is 7 ° C in the south and −1 ° C in the north; the temperature differences between the southern and northern parts are maintained even in the coldest month which is February: in Stockholm the average is −3 ° C, in Haparanda −11 ° C and in Karesuando −39 ° C. The coldest region is the central one of Lapland, where it is rare for the temperature to remain above 0 ° C for more than five months; in general, days with a temperature below −10 ° C fluctuate between 120 and 140 per year.
Furthermore, the duration of the cold season increases as people move north. Here the ice persists from October to May; for example the lakes here remain frozen for about 200 days, in the south only half the time. In the coldest winters, the Åland Sea is covered with a layer of ice so thick that it allows vehicles to pass through; on the western and southern coasts of Sweden, on the other hand, winter traffic is only exceptionally obstructed by ice.
The Swedish summer is short and the maximum temperature is reached in July with an average of 19 ° C in Gothenburg and 18 ° C in Haparanda; the number of days with a temperature above 25 ° C varies from 10 to 20.
Precipitation generally decreases from north to south and from west to east; there is a maximum, around 1500 mm, along the northern reliefs and in the western part of the plateau of southern Sweden where the humid winds of the Atlantic Ocean reach. Precipitation minima are found in the interior of Norrland, in eastern Svealand and on the eastern and southern coasts. Furthermore, the distribution of rainfall is maximum towards the end of summer and autumn with differences in relation to the more or less continental character of the various regions. Part of the precipitation falls in the form of snow, about 10% in Scania and 70% in Norrland; snow cover lasts on average from 47 days in the south to 190 in the northernmost regions. Glaciers can only be found on Kebnekaise, Sarektjåkkå and Sulitjelma.

Flora-
Most of Sweden is dominated by forests of fir, pine and birch. The southern part of the country is home to more mixed forests, and in the far south deciduous trees such as beech, oak, linden, ash, elm and maple are common. The forests are rich in berries, such as cranberries and blackberries, and mushrooms. In Sweden, anyone is allowed to walk in the forest and pick berries and mushrooms.
High in the mountains, coniferous trees give way to mountain birches, which extend to the tree line at an altitude of 480-880 meters. The treeless mountains, with their moors, swamps and boulders, are home to alpine-like flora, with species such as dwarf birch and dwarf willow.
Thanks to their limestone substrate and mild climate, the islands of Gotland and Öland are home to a particular flora, which includes many orchids.

Fauna –
In Sweden we find bears and lynxes that still survive today in the northern forests, while wolves are slowly returning in numbers, after having almost disappeared from the country in the twentieth century. There are large numbers of moose, roe deer, foxes and hares throughout the country. The moose is a very popular prey for hunters, but it also poses a danger to traffic. Hunting and fishing are strictly regulated and many animal species enjoy complete protection. Large herds of domestic reindeer owned by the Sami (Lapps) graze in the mountains and forests of the north of the country.
The winter avifauna is characterized by few species, but in summer a large number of migratory birds from southern Europe and Africa come here, such as cranes and wild geese. Sweden is home to a rich variety of aquatic animal life, albeit greatly depleted by environmental pollution. Among the species most affected by water pollution are the Baltic seals. Fish species include cod and mackerel from the deep, salty waters of the Atlantic, and salmon and pike found in the much less salty waters of the Baltic, as well as in lakes and rivers. Atlantic herring and its smaller cousin, the Baltic herring, have long been traditional food sources for the local population.