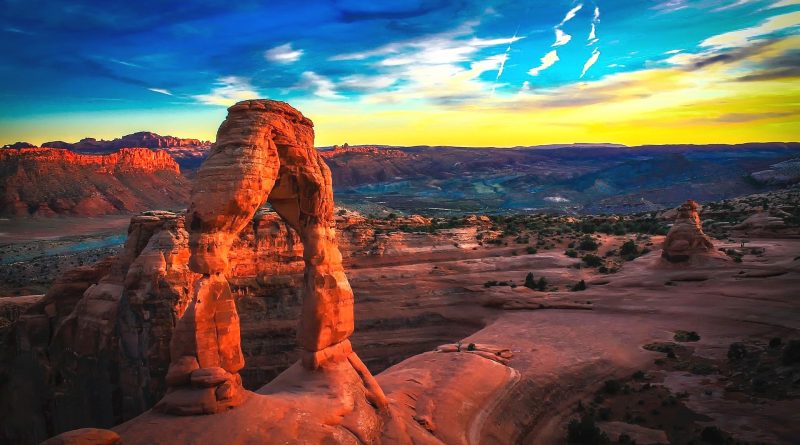 Arches National Park, whose WDPA Code is: 996 is a United States park located in the State of Utah, with a land area of ​​30,900 Ha.
This park was established by Act of Congress on 12-04-1929 and is managed like other parks in the United States by the National Park Service.

Geography –
Arches National Park is located near Moab, Utah and at an altitude that varies between 1723 m and 1245 m. this park was originally designated as a national monument and then converted to a national park on November 12, 1971.

Geology –
Arches National Park is located on an underground salt bed called the Paradox Basin, responsible for the formation of arches, spirals, balanced rocks, sandstone fins and eroded monoliths. It is an area that reaches a thickness of several hundred meters and which was formed by deposit more than 300 million years ago when a sea submerged the region and probably evaporated. For millions of years the remnants of floods, winds and oceans that formed and disappeared covered this formation. The debris was compressed and turned into rock, reaching a thickness of over 1.5 km.
The salt under pressure is not stable and the salt bed, subjected to the enormous pressure of the debris above it, shifted, liquefied and repositioned itself pushing the overlying rock layers upwards (like domes) and entire sections sank as if cavity.
Subsequently the deep cracks in the earth made the surface even more unstable, leading to the formation of faults that contributed to the development of the arches (including the Landscape Arch, the Delicate Arch and the Double Arch). The displacement of the saline subsoil has shaped the surface and erosion has uncovered the younger rock layers. The major formations today are the salmon-colored Entrada Sandstone whose sandstone makes up most of the arches, and the pale yellow Navajo Sandstone.
Then the water seeped through the surface cracks, joints and cavities. The ice formed in the cracks, expanding and pressing on the rock, caused it to explode into fragments. The wind subsequently cleared this debris leaving fins exposed, thin isolated walls of sandstone. The atmospheric agents then attacked these fins, eroding the rock. Many of these shattered, others more resistant survived despite the missing sections. The latter became arches.

Climate –
The Arches National Park is characterized by a climate of the high-altitude desert region with high temperature variations, which can even exceed 20 ° C per day.
In this area, the temperate seasons are spring (April-May) and autumn (mid-September-October) when the average maximum temperatures during the day vary between 15 ° C and 26 ° C and the minimum between 0 ° C and 10 ° C.
Summer temperatures can exceed 37 ° C and violent thunderstorms create floods in late summer. Winter is cold with average maximum temperatures between 0 ° C and 10 ° C and average minimum temperatures between -17 ° C and -7 ° C, however snowfalls are rare except in the nearby mountains and even a small snowfall or formation of ice can make trails impassable. 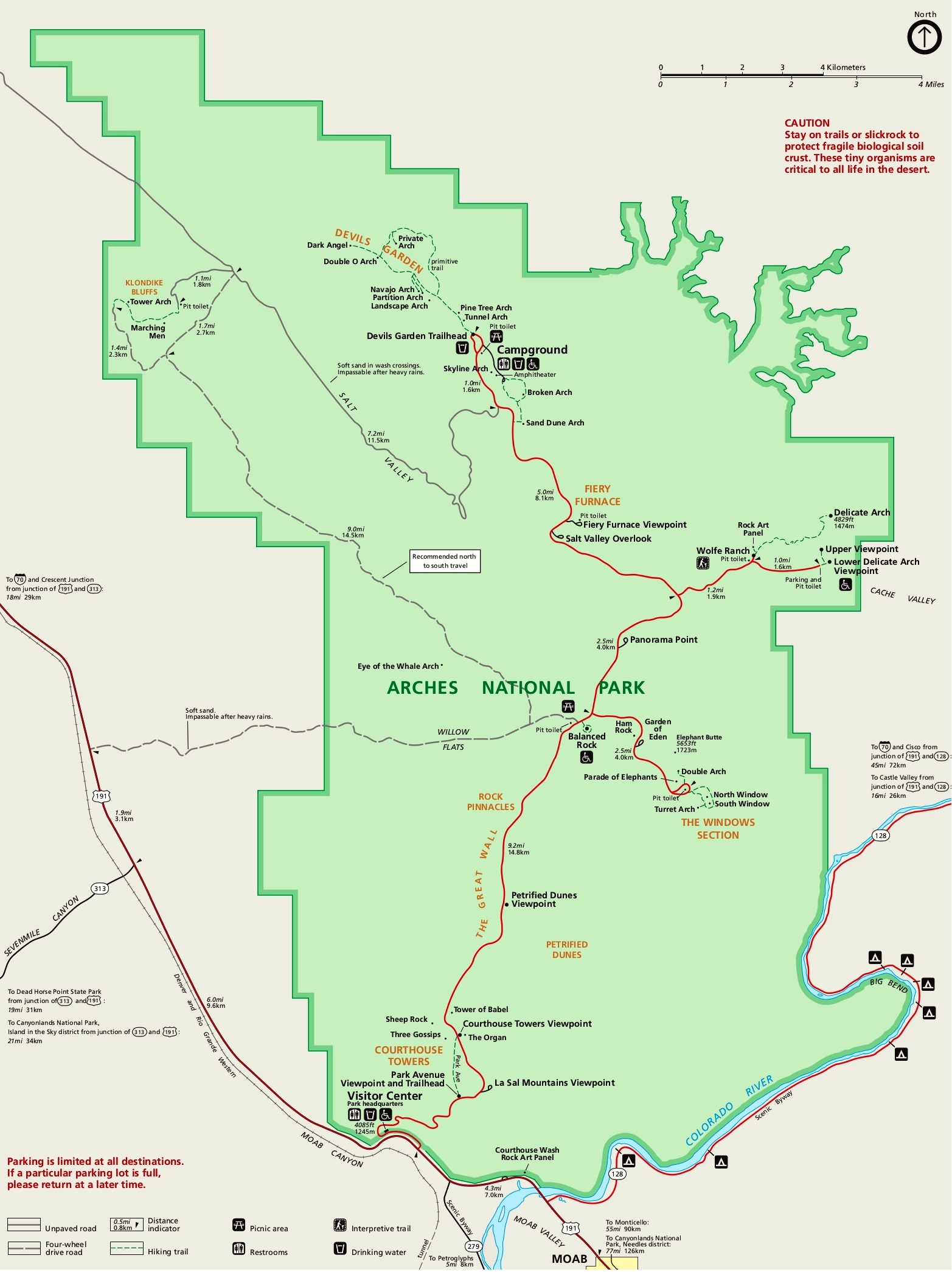 Flora –
The vegetation of the Arches National Park is typical of desert areas. Here we find shrubs such as Ephedra viridis, also known as Mormon Tea, which contains ephedrine and was used to decongest the nose or as a stimulant as an alternative to caffeine. Coleogyne ramosissima is an important winter food for bighorn sheep despite being spiny and Atriplex canescens. Celtis reticulata, American maple (Acer negundo), Bohemian sea-buckthorn (Eleagnus angustifoglia) and Freemont’s poplar (Populus fremontii) grow in the park area. The Bohemian sea-buckthorn is not native to the area but has supplanted native tree species and altered environmental development.
In the Arches National Park we also find several species of pine and the Utah juniper (Juniperus osteosperma) which are widespread in much of the area. These trees grow in groups and dominate the dry and rocky landscape at altitudes ranging from 1300 to 1900 meters. As the altitude decreases, the trees become more sparse and the juniper takes over due to its greater resistance to the arid environment. The various species of Pinus that grow in this area have a twisted trunk, the bark is reddish and are characterized by a very slow growth: trees with a diameter of 10-15 cm and 3 m high can be between 80 and 200 years old. The root system of these trees is particularly extensive and easily reaches the size of the tree. Pine cones contain tasty, protein-rich seeds and provided an important food source for Native Americans. The Utah juniper is the classic desert tree, its twisted being and the many dry branches underline the harshness of living conditions in the arid environment. In the absence of humidity, juniper interrupts the flow of sap in the outermost branches to increase the chances of survival. Other adaptations of this plant that allow it to survive in arid environments are the scaly leaves and waxed seeds.

Fauna –
The Arches National Park, although apparently desolate and desert. It is populated by many species of birds, lizards and rodents.
In this sense, desert animals have a series of adaptations that make them suitable to survive the high temperatures and low humidity of this environment. Many are nocturnal, this is an adaptation to both high temperatures and predation. Among the nocturnal animals we can mention the kangaroo rat, the wood rat, the common skunk, the raccoon, the gray fox, the Vulpes macrotis, the bobcat, the puma, various species of bats and nocturnal raptors.
Some animals are nocturnal while others are crepuscular. Among the crepuscular animals we can mention the mule deer, the coyote, the porcupine, the desert rabbit, the Californian hare.
Other animals are mainly active during the day, such as Spermophilus variegatus, Amospermophilus leucurus, Neotamia rufus, lizards, snakes, hawks and eagles. Many animals are active within a range of temperatures, so they change their habits depending on the season. Snakes and lizards go into an inactive state during the winter, are active during the day in spring and early autumn, and become crepuscular in midsummer. Along with cacti and sand dunes, reptiles are one of the symbols of the desert. The only reptiles present in the park are snakes and lizards, very important animals for the ecosystem of this environment as they regulate the populations of insects and rodents and are in turn prey for birds and mammals.
All reptiles are cold-blooded or ectotherms, that is, their body temperature is regulated by that of the external environment and not by metabolism. Having no heat dispersion systems, they cannot withstand extremely high temperatures for a long time and cannot even survive temperatures below freezing. When it is cold, reptiles hibernate or go into a lethargic stupor, food accumulated as fat in the tail helps the lizards survive long periods of inactivity, so losing their tails could put their lives at risk. During the summer it is very easy to see lizards, after birds these reptiles are the most active animals during the day. They are normally seen warming up on rocks or hunting and chasing insects.
But the easiest animals to spot within the Arches National Park are birds.
Among these, even on the hottest days, you can see the red-necked vulture and the white-throated swift flying in a circle above the rock formations. In winter, the Junco hyemalis and the white-headed sparrow go in search of food among the trees and shrubs. Although the park cannot be considered a birdwatcher’s paradise, 273 species of migratory and resident birds have been sighted. This species diversity is due to the riparian habitats of the Colorado River and Courthouse Creek. In the desert, animal life tends to be concentrated in these areas thanks to the abundance of food, water and shelter. In spring and summer, you can hear the singing of many birds in the morning, including the blue grosbeak, yellow-bellied parulea, oriental toui, canyon wren. The great blue heron can also be seen hunting small fish in shallow water, while Cooper’s sparrow hawk hovers among the trees on the shore. Many birds prefer high ground where grass, shrubs and small trees are dominant.
Amphibians are the last thing thought to live in the desert, yet the park is home to a variety of frogs such as the bullfrog and leopard frog and Hyla arenicola, toads such as Bufo punctatus and Bufo woodhousei, and a salamander species Ambystoma tigrinum. A confirmation of these presences is offered by the incredible spectacle of the song of toads that fills the canyon sometimes even for hours. Amphibians are animals whose life is divided into two phases, an aquatic larval and a terrestrial adult.