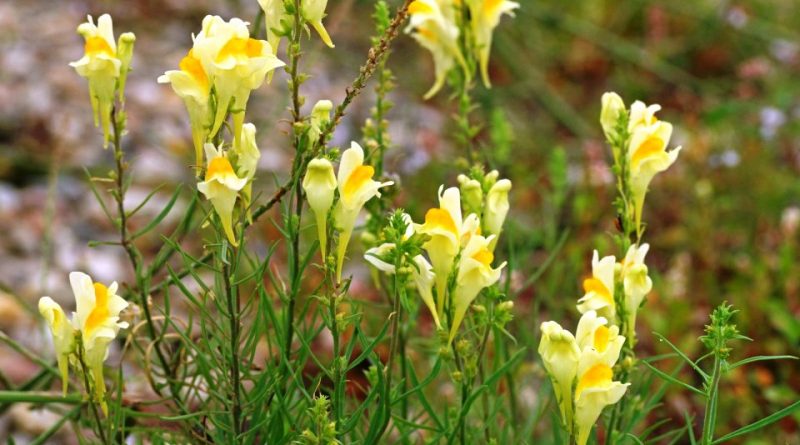 Common toadflax or yellow toadflax or butter-and-eggs (Linaria vulgaris Mill., 1768) is a perennial herbaceous species belonging to the Plantaginaceae family.

Etymology –
The term Linaria comes from Linum, from the Greek λίνον línon, which became linum in Latin, flax: due to the leaves similar to those of flax.
The specific epithet vulgaris comes from vúlgus vulgo: very common, ordinary due to its widespread use, banal.

Geographic Distribution and Habitat –
Linaria vulgaris is a plant with native to the Eurasian or even Eurosiberian range and common in Europe and in the Asian temperate belts (China and Korea).
In some countries such as North America it has escaped cultivation, where it is common on roadsides and in poor soils, and has now naturalized in many US states and Canadian provinces.
In Italy it is a common species and present everywhere (excluding Sicily). In the Alps it is present on both sides (north-south). On the other European reliefs connected to the Alps it is found in the Black Forest, Vosges, Jura Massif, Central Massif, Pyrenees, Dinaric Alps, Balkan Mountains and Carpathians.
Its typical habitat is uncultivated (but also crops), ruins, rubble and embankments, with a preferred limestone substrate but also siliceous with neutral pH, medium nutritional values ​​of the soil that must be dry.
The plant is present from sea level up to 1,500 m a.s.l., although in China it is present up to 2,200 m a.s.l. 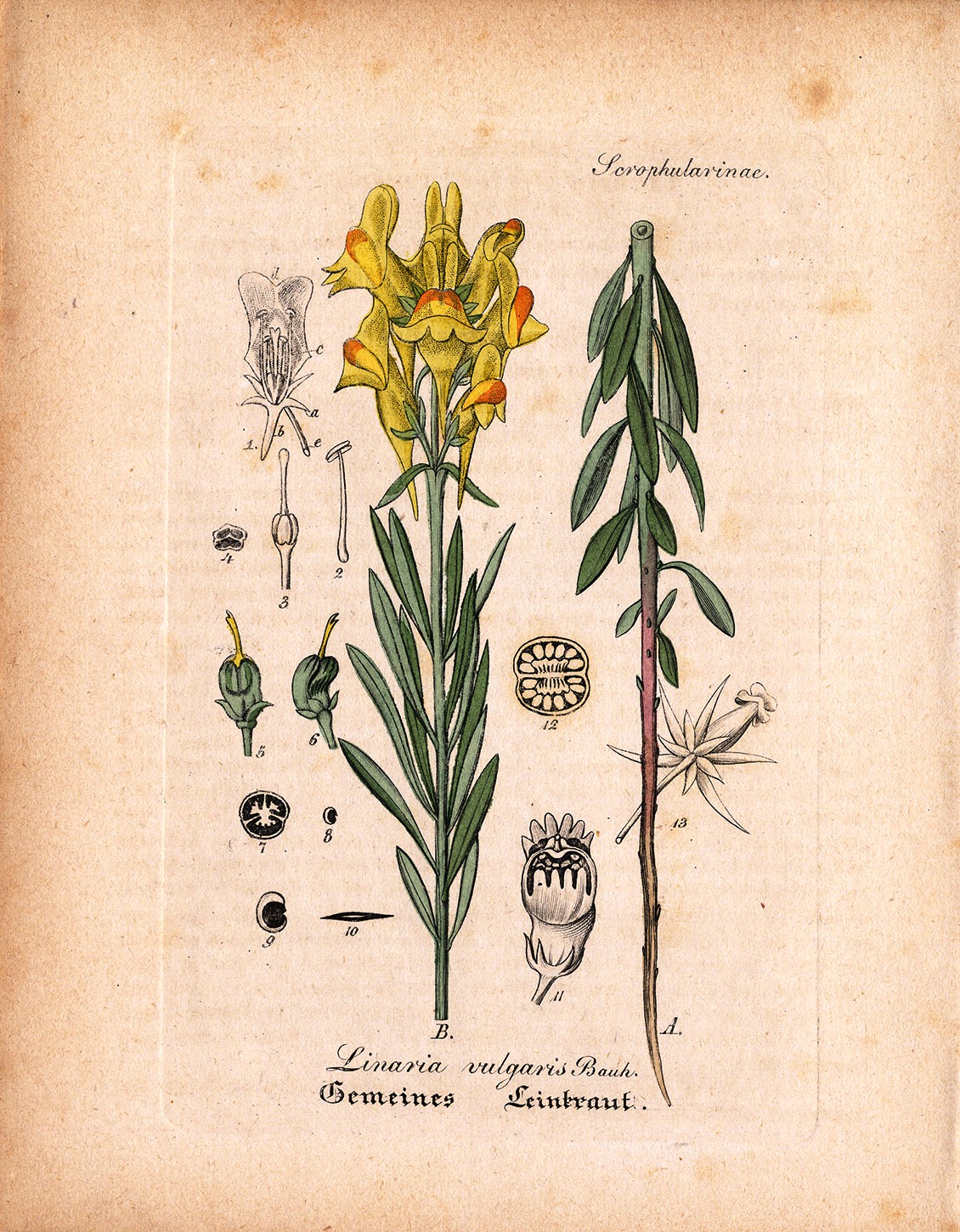 Description –
Linaria vulgaris is a perennial herbaceous plant, hairless, sometimes slightly hairy in the inflorescence, up to 80 cm tall.
It has a tap root with few secondary roots.
The flower stems are erect, occasionally ascending, simple or branched, leafy, woody and leathery at the base.
The leaves are glaucous, linear or linear-oblanceolate, alternate or arranged in whorls at the base.
The inflorescence is racemose, tight, with numerous erect flowers and small lanceolate, acute bracts; zygomorphic and gamopetal flowers, with slightly curved spur, shorter than the corolla; glabrous calyx, with ovate or lanceolate sepals, acute; pale yellow corolla with orange mouth; 4 stamens, ovary superior.
It blooms from June to October.
The fruits are fissuricidal capsules, hairless, biloculate, ovoid or oblong-globose, do (4) 4.5-9 mm, which contain a large quantity of small suborbicular seeds, 1.8-2.8 x 2-2.5 mm, flat, tuberculous, of blackish gray color, with a paper circular wing of 0.4-0.8 mm.

Cultivation –
Common toadflax is an easy-to-grow plant that grows mainly in well-drained and medium-fertility soils.
It prefers soils with neutral to alkaline pH and in a sunny position, but can also grow in partially shaded areas.
It is a very resistant plant to drought, once it has taken root enough to be able to vegetate in dry stone walls.
Plants can spread very quickly when they are in suitable areas and often self-sow even freely.
Propagation occurs by seed with sowing to be carried out in the open field, broadcasting, in the spring period.
It can also be multiplied by division in the spring or autumn period. The larger tufts can be replanted directly into their permanent locations, although it is best to pot the smaller tufts and grow them in cold pallets until they take root well. The transplant must then be carried out in the spring. This species can be successfully divided almost at any time during the growing season.

Customs and Traditions –
Linaria vulgaris is a perennial plant that is harvested in its natural state or cultivated and used for both food and medicinal purposes.
According to some reports, the plant, used beyond certain quantities could be toxic.
Among the edible uses it should be noted that the young shoots should be eaten cooked.
For medicinal use, the plant has been used since ancient times and its use is mainly for the liver and was once widely used as a diuretic in the treatment of edema, although it is currently little used and research should be carried out on it.
The whole plant is anti-inflammatory, astringent, cathartic, cleansing, purifying, diuretic, hepatic, ophthalmic and purgative.
The plant is particularly appreciated for its strongly laxative and diuretic activities and is used internally in the treatment of edema, jaundice, liver disease, gallbladder disorders and skin problems.
It is applied externally on hemorrhoids, rashes, sores and malignant ulcers but always used with caution and should only be used by a qualified doctor and should not be administered to pregnant women.
Among other uses, it should be remembered that a yellow dye is obtained from the entire Linaria vulgaris plant or even from the flowers alone.
An extract used as an insecticide is obtained from the plant.
The plant contains flavone.
From an ecological point of view it is a very popular plant for bees.

Preparation Method –
The Common toadflax is a plant that is harvested as soon as it blooms and can be used fresh or dried.
All fresh plant that an ointment made from flowers, is applied on rashes, etc ..
The juice of the plant, or distilled water from it, is a good remedy for inflamed eyes and for cleaning ulcer sores.
A homeopathic remedy is obtained from the plant.