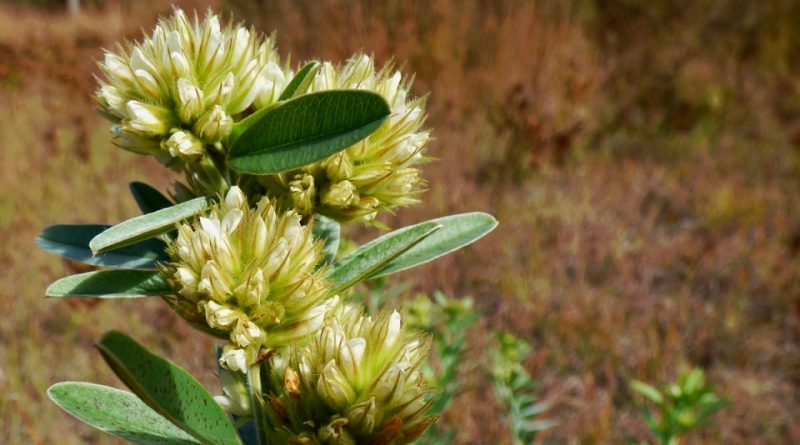 The Roundhead Lespedeza (Lespedeza capitata Michx.) Is a herbaceous species belonging to the Fabaceae family.

Etymology –
The term Lespedeza, according to the American botanist Asa Gray (1810 – 1888) is due to the governor of eastern Florida Vicente Manuel de Céspedes (1784-1790 who, through a letter, allowed the botanist André Michaux to explore eastern Florida in search of new species of plants and where Michaux found Lespedeza; however, when Céspedes wrote the letter, at the beginning of it, Céspedes’s name was changed to “Zespedez.” Thus, when Michaux’s book Flora Boreali-Americana of 1802 was printed, the name “Céspedes” to refer to the plant was written as “Lespedez”, the word from which the current name of the plant derives.
The specific epithet capitata comes from cáput, cápitis testa, of the head: with a peeping inflorescence, or conspicuous or strange peeking.

Geographic Distribution and Habitat –
Lespedeza capitata is a plant native to eastern North America, including eastern Canada and the eastern half of the United States.
Its natural range is that of eastern and central North America – South Dakota through southern Ontario to Maine, southern Texas and northern Florida.
Its usual habitat is that of arid fields, sandy open woods or open terrain in Texas and mountain woods, groves and grasslands, on clearings and along streams, railways and road edges. 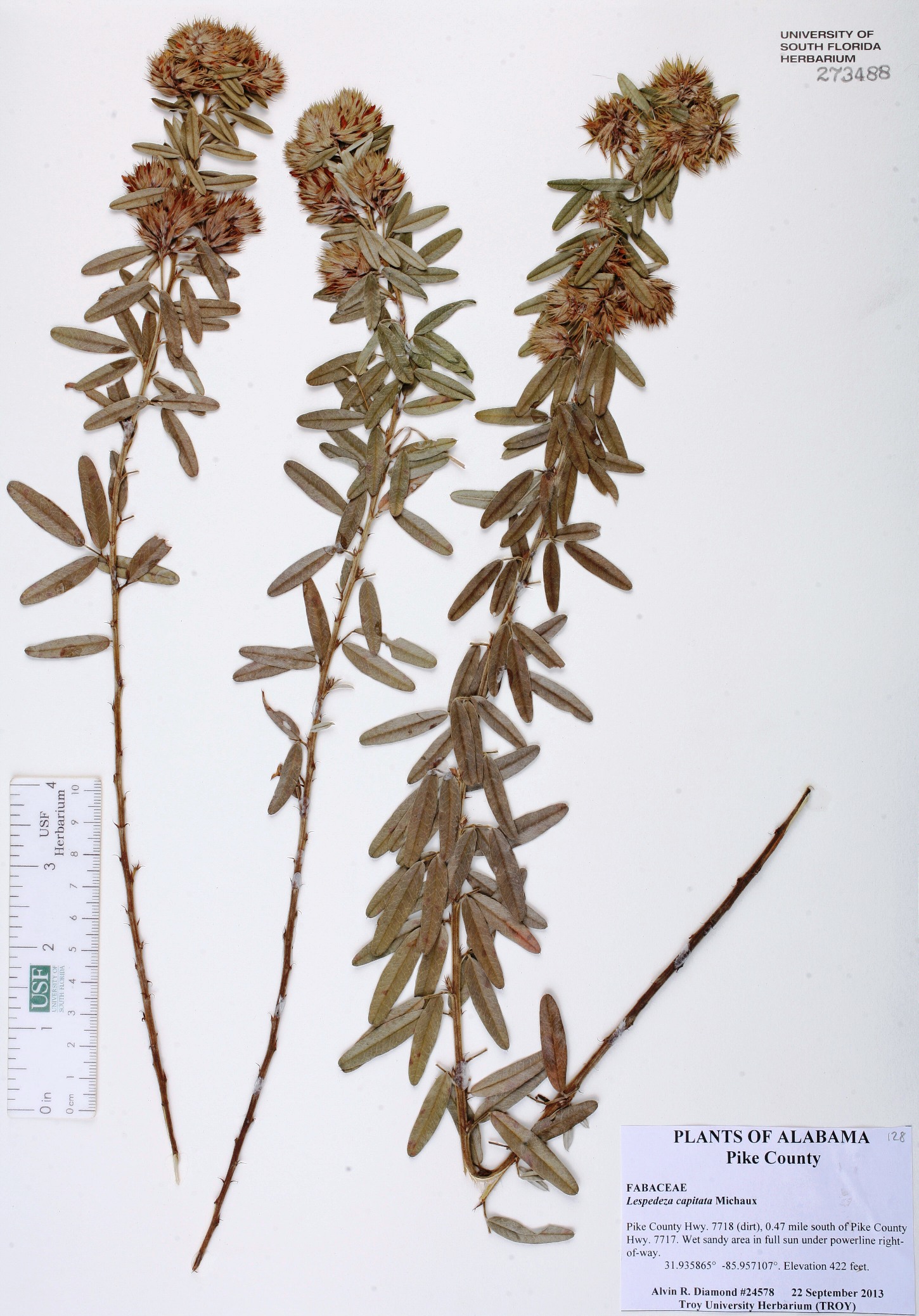 Description –
Lespedeza capitata is a perennial herbaceous plant with an erect bearing that produces a cluster of stems usually 60 – 120 cm high, which occasionally reach 150 cm.
The root is taproot that can grow over two meters deep in the soil, with lateral roots reaching one meter horizontally.
The leaves are arranged alternately and each made up of several leaflets. The plant is covered with silvery hairs.
The flowers are carried in somewhat rounded clusters at the top of each stem. The flower is white with a purple spot.
The fruits are legumes, typical of legumes, indehiscent.

Cultivation –
Lespedeza capitata is a plant that is harvested in nature for local and commercial use as medicine and local use as tea but also for use as an ingredient in cosmetics. It is grown in soil conservation programs and is also sometimes grown as an ornamental plant in gardens.
Lespedeza capitata is a very cold resistant plant, able to tolerate temperatures down to about -30 ° C when it is completely dormant and prefers a position in full sun, tolerating partial shade.
It is easily grown in a light to medium substrate, well drained and grows well even in low fertility soils.
Established plants are drought tolerant.
The plant produces cleistogamous flowers (closed flowers that produce fertile seeds without being pollinated) and hermaphrodite flowers that are pollinated by insects, especially bees.
Plants can self-seed in the garden when well positioned.
This species has a symbiotic relationship with some soil bacteria; these bacteria form nodules on the roots and fix atmospheric nitrogen. Some of this nitrogen is used by the growing plant, but some can also be used by other plants growing nearby.
Propagation occurs by seed which must be moistened for 24 hours in warm water and then sown in spring in an unheated greenhouse. When they are large enough to be handled, the seedlings should be transplanted into individual pots to grow them in the greenhouse at least for their first winter. They should then be planted in their permanent positions in late spring or early summer, after the last expected frosts.
It is also possible to prepare cuttings of semi-mature wood of 7 – 10 cm in the period of mid-summer in single pots.
This plant is used as a component of seed mixes for pasture vegetation. It is a good addition to livestock fodder, as it is palatable and nutritious. Furthermore, the plant can also be used as an ornamental in floral compositions.

Customs and Traditions –
Lespedeza capitata has long been used for a number of medicinal uses for Native Americans. It was used to treat rheumatism. The Comanches used the leaves to make tea. The Meskwaki used the roots to create an antidote to poison. The Pawnees called the rabbit’s foot plant (parus-asu) for the shape of its fruit and made tea with the dried stems and leaves when coffee was not available. Among the Omaha and Ponca peoples, it was known as the male buffalo mooing plant.
In nature, this plant grows in wooded areas, grasslands and in disturbed habitats such as roadsides. It is also a useful plant for numerous species of moths.
Its seeds are popular with several bird species, especially the white quail.
The plant is used in the food industry as the leaves, especially once, were boiled to make tea.
Lespedeza capitata has multiple medicinal uses.
The leaves and flowering stems are an effective diuretic with protective virtues of the kidneys. It is normally used in the form of a tincture; it has been shown that it also possesses hypoglycemic, hypotensive and hypocholesterolemic activity.
An extract of the plant is of controversial utility in chronic kidney disease.
Experimentally, it has demonstrated anticancer activity against Walker-256 carcinosarcoma and has also been reported to be effective in lowering blood cholesterol levels.
It is also believed to reduce blood levels of nitrogen compounds in people with high levels of nitrogen in their urine.
The root was used as an antidote to poisoning, and the stems were used in the treatment of neuralgia and rheumatism.
The plant contains several biologically active compounds, in particular flavonoids and tannins from which commercial pharmaceutical preparations are made.
Among the main constituents we find catechetical tannins, catechols and flavonoids. It is the latter that determine the diuretic action of the plant, as they have a particular chemical structure: the sugar of the glucoside is linked to the flavone as a glucosyl derivative. This bond means that the glycosides are much more resistant to hydrolysis and can exert a diuretic action for a longer time.
For this reason, clinical trials have shown that the plant can successfully treat patients with azotemia, giving good results even on subacute and chronic nephritis. Lespedeza also has a favorable influence on acute and chronic renal failure states.
Among other things, clinical studies have demonstrated the ACE inhibitory action (typical activity of antihypertensive drugs) of Lespedeza extract. The ACE enzyme converts angiotensin I into angiotensin II, causing peripheral vasodilation: in particular, they not only inhibit angiotensin II, which is a powerful vasoconstrictor, but also delay the degradation of a powerful vasodilator (bradykinin) and alter the synthesis of prostaglandins. The indications of this plant are therefore, stimulation of diuresis and treatment of light or medium azotemias.
Among other uses it should be remembered that an extract of the whole plant is used as an ingredient in commercial cosmetic preparations as a skin conditioner. In addition, an extract from the leaves and stems is used as an ingredient in commercial cosmetic preparations as a conditioner and skin protector.

Preparation Method –
Lespedeza capitata is a plant that in the food field is used to prepare a tea from its leaves.
The root was once used as an antidote to poisoning and the stems were used in the treatment of neuralgia and rheumatism.
In the medical field it has various uses. As a rule, the leaves and flowering stems are used, which are an effective diuretic with protective virtues of the kidneys. It is normally used in the form of a tincture.