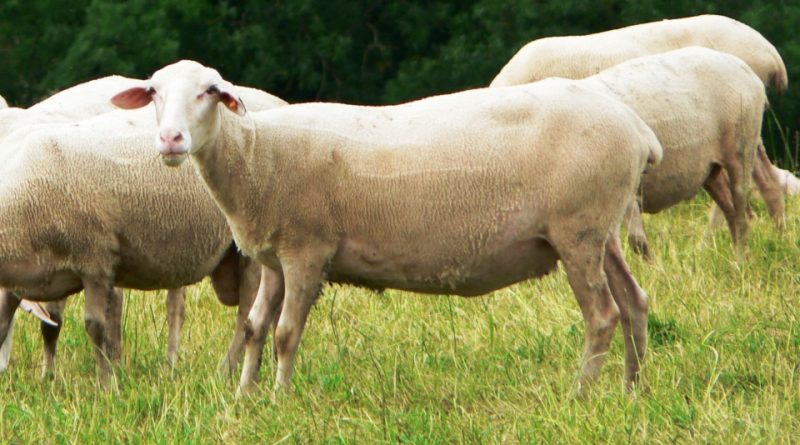 The Lacaune sheep is a French sheep breed (Ovis aries Linnaeus, 1758) originally from the Roquefort region (France), with an aptitude for milk production.

Geographic and Area Distribution –
The Lacaune sheep breed originates from the homonymous mountains, in the Roquefort region (France) and is the most bred breed of sheep in France, where it has been carefully selected for the production of milk. With its milk, various types of cheeses are produced, including the famous Roquefort. It is also bred in many European countries, in North and South America.

Origins and History –
The Lacaune is a sheep breed native to Lacaune, in the south of France, in the departments of Tarn and Aveyron and the surrounding areas. This region is collectively known as the “Roquefort Sector” which refers to the milk collection area.
The Lacaune is the most widespread dairy sheep breed in France, with a population of around 800,000 sheep. In particular, it is the predominant breed used in the production of Roquefort cheese in France.
Parent sheep first arrived in this region of France 4,000 to 6,000 years ago. At that time the land was harsh and desolate but the sheep could adapt well to it. In the mid-19th century, breeders began genetic improvement with other local breeds to produce a robust breed of sheep that produced rich milk and good meat.
This led to the development of the original Lacaune dual-purpose breed. The Lacaune has been used as a dairy sheep in France for a long time, but milking was not the dominant feature of the breed until recently. At the end of the 1960s, the average milk production per ewe was only about 70 liters per year during the milking period (excluding the lamb lactation period).
Surprisingly, by the late 1990s, milk production had quadrupled to 280 liters per year. The Lacaune is today one of the high-yielding dairy breeds in the world. This was the result of a rigorous and large-scale breeding program organized by a French government agency. This program included artificial insemination of several million sheep over the years, a wide range of government aid for recording progeny performance on many farms with respect to milk production and other outcomes, improved knowledge of animal management and nutrition for sheep milk production and the willingness of many farmers to participate in the program and benefit from what they have learned. The combination of these and other factors resulted in a 6.3% annual improvement in sheep milk production in the breed over 30 years. The 6.3% gain can be broken down into “a phenotypic gain of 3.9% (better management and nutrition) and a genetic gain of 2.4%. Since 1995 the phenotypic gain has been negligible”.
However, the success of the large-scale breeding program did not lead to the extinction of the pre-existing low-milk-producing Lacaunas.

Morphology –
The Lacaune sheep has an average weight of up to 100 kg for males and 65-75 kg for females with a height of 70-80 cm at the withers.
This breed is characterized by a thin, elongated head, the muzzle is slightly rounded and the ears are small, inclined downwards and are a bit floppy compared to other breeds; moreover, it is devoid of horns in both sexes. The head is devoid of fleece.
Lacaune sheep are generally white in color.

Productive attitude –
The Lacaune sheep, compared to other sheep mainly used for their milk, is a much more resilient breed. The breed is less prone to disease, but crossing for hybrid vigor is still recommended to reduce the amount of disease incidence in lambs. They also don’t have high birth rates like other dairy sheep. They produce less milk than other breeds such as the East Friesian, but their milk has a higher fat and protein content which produces a higher yield during cheese making.
The breed is also suitable for rough terrain due to the small hooves that can proceed better on rocky slopes.
These sheep also have a fairly bold temperament and are less docile than other dairy breeds of sheep.
The production of wool in this breed is also not very important. Many Lacaune sheep have very little wool and the head, legs and sometimes the entire belly are bare. Their double layer of wool is capable of shedding one layer in the summer so they can keep cool.
During milking, Lacaune sheep have higher oxytocin release than other breeds with nipple stimulation. This means that milk will be translated more easily in Lacaune sheep than in other dairy sheep breeds. This breed also has a shorter mean time to reach maximum flow rate.
As far as meat production is concerned, the slaughter yield of Lacaune sheep is not as high as in other breeds.
Lacaune sheep are best suited to managing pasture in their environments. Due to the intensification of dairy production systems, Lacaune sheep spend part of the year in the fold. The first weeks of milking take place in the sheepfold but the sheep are brought out to pasture during the day. The Lacaune sheep is the second most productive dairy sheep breed in the world.
As for the birth, this happens once a year, towards the end of the year (from November to January). The lambs are suckled for 5 weeks and then weaned so that the sheep’s milk can be used for the production of Roquefort cheese. Lambs produced that are not used as substitutes for the dairy herd are sent to the market. Due to the calving period, Lacaune lambs are usually the first to hit the market each year.
This breed, as mentioned, is the result of a careful selection program which, from the beginning of the program, has led to an improvement of over 5 L per lactation, 0.19 g / L of fat content and 0.17 g / L of crude protein content. The Lacaune breed, thanks to this extensive program, has the most studied genetics of any dairy sheep breed in the world.
One of the reasons this program has been so successful has been the dramatic decrease in the cost of genotyping and genome sequencing in animals.
As for the quality of the milk, this is generally described as healthy, with a high fat and protein content and a rich flavor. The butterfat content of milk makes it suitable for the production of many different types of cheese.
However, the main use of the Lacaune sheep is for the production of Roquefort cheese. Theirs is the only milk used to make cheese. Roquefort is a blue cheese that is usually made from unpasteurized milk from Lacaune sheep. The cheese is semi-soft and usually has a creamy and crumbly texture.