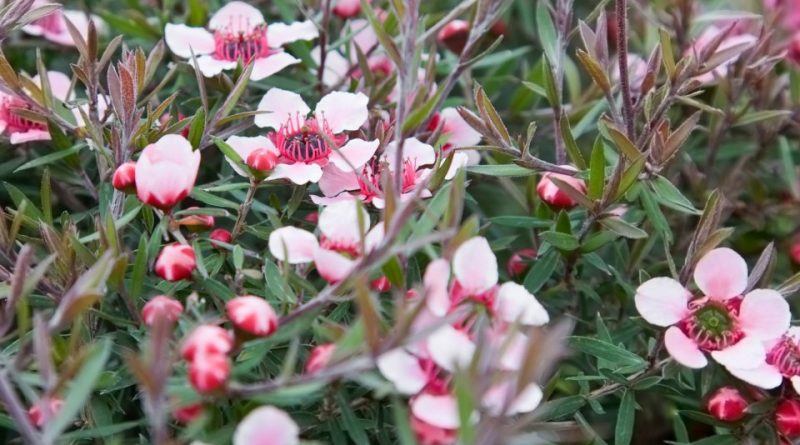 Etymology –
The term Leptospermum comes from the Greek λεπτός leptós thin, tenuous, delicate and from σπέρμα spérma semen: from the subtle seed.
The specific epithet to fuck me comes from broom broom, grenade: suitable for making brooms or similar to a broom.

Geographic Distribution and Habitat –
Manuka is a plant native to south eastern Australia and New Zealand (including the Chatham Islands) but is particularly common on the driest eastern coasts of the North and South Islands, and in Australia in Tasmania, Victoria and New South Wales.
Research and findings suggest that L. scoparium originated in Australia before the onset of Miocene aridity and moved as a result of long-distance dispersal events in New Zealand from eastern Australia during the past 20 million. years. Cyclones and other wind activities are most likely responsible for transporting seeds over long distances. Proponents of this claim cite evidence that the genus Leptospermum arose in conditions where frequent forest fires were common (i.e. in Australia, and not in temperate New Zealand), because they possess fire-adaptive characteristics.
It has been introduced in other countries such as the United Kingdom and the Hawaiian archipelago where the plant has escaped cultivation in some areas and is seen as a possible threat to the native flora of southern Africa and Hawaii.
Its habitat is varied being from the plains to the alpine areas, North, South, Stewart and Chatham Islands, in the rocky and sandy moors, often near streams and often in rocky sites. 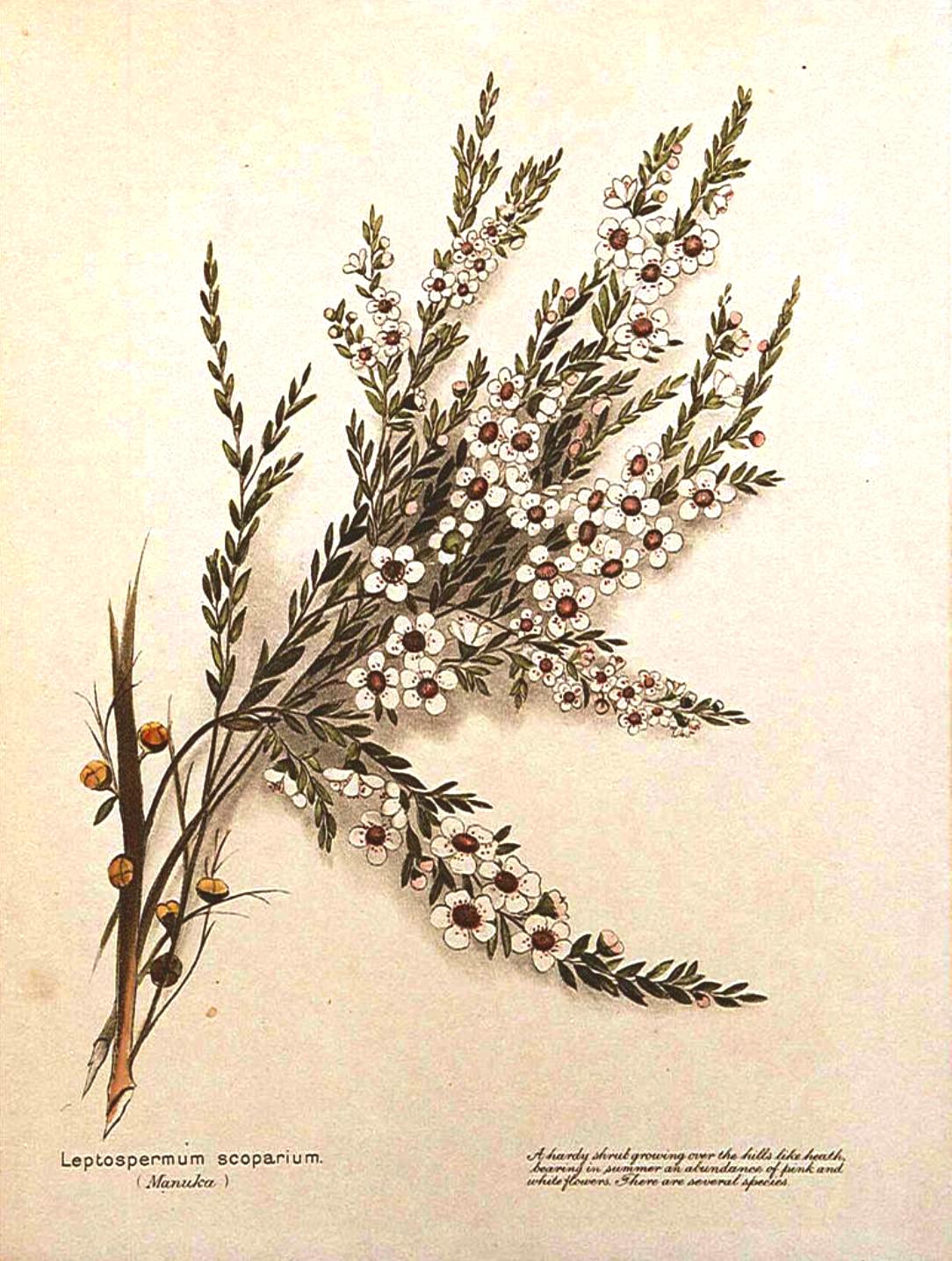 Description –
Leptospermum scoparium is a plant with a height of 2–5 m with a shrub or small tree habit although it can grow with moderate size, up to 15 m or so.
It is an evergreen plant, with dense branches and small leaves of 7-20 mm in length and 2-6 mm in width, with a thorny part at the apex.
The flowers are white, sometimes pink, 8-15 mm (rarely up to 25 mm) in diameter, with five petals.
The wood is firm and hard.
This species is often confused with the related kānuka species (Kunzea ericoides (A.Rich.) Joy Thomps.). The easiest way to tell the two species apart in the field is their foliage – mānuka leaves are thorny, while kānuka leaves are soft.
Alternatively, the manuka seed capsules are large (5–7 mm) in diameter) and often remain on the plant all year round, while the kānuka seed pods are much smaller (2.2–4.6 mm in diameter) and are not present for most of the year.

Cultivation –
Leptospermum scoparium is a plant with little resistance to cold, able to tolerate short periods with temperatures down to about -10 ° C when it is completely dormant.
This plant grows in almost any neutral or acidic soil of good or reasonable quality, preferring a sandy loam and full sun exposure.
It also grows in dry soils and prefers a location sheltered from hot or cold dry winds. It has been found that the plants are quite tolerant to marine exposure.
This plant is often grown as an ornamental and many forms have been selected for their ornamental value which include some dwarf varieties that grow very well in pots in cold greenhouses and conservatories.
The plant does not tolerate transplantation and propagation takes place by sowing in spring, taking care to put the seedlings in individual pots when they are large enough to be managed and then grow them in the greenhouse at least for their first winter.
The plant should be done in late spring or early summer, after the last frosts expected, giving good protection from the cold for the first or two winters outdoors. The seed remains viable for many years.
The plant can be propagated by semi-mature wood cuttings, 5 – 8 cm long, to be rooted at the beginning of August in a cold greenhouse for its entire first year. The rooting percentage is good.
Numerous cultivars have been developed for use in the garden, of which the following have been awarded the Award of Garden Merit by the Royal Horticultural Society.

Customs and Traditions –
Manuka is a plant used by the native Maori for multiple uses since remote times already in pre-European times.
Wood was often used for tool handles. It is also used for carving work.
The sawdust from this plant gives it a delicious flavor when used to smoke meat and fish. It is grown in New Zealand for manuka honey, produced when bees collect nectar from its flowers, and for the pharmaceutical industry.
Leptospermum scoparium is a major source of honey produced by Apis mellifera and the production of manuka honey has become an important industry both in New Zealand and elsewhere. Although many types of honey have antibacterial properties due to the presence of hydrogen peroxide, only manuka honey has a high level of antibacterial activity without peroxide. This non-peroxide antibacterial factor has been called the Unique Manuka Factor (UMF). Manuka honey is now used in many medical products in many countries.
From the steam distillation of its leaves an essential oil is produced which is used for many medicinal uses.
A decoction of the leaves was drunk for urinary disorders and as a febrifuge.
Steam from the leaves boiled in water was inhaled for colds, and a decoction was prepared from the leaves and bark, and the hot liquid was rubbed into stiff muscles and aching joints. Emollient white gum, called pai Manuka, was given to infants and also used to treat sunburn and burns. Chewing the bark is said to have a relaxing effect and improve sleep.
The essential oil obtained from the plant has vermifuge and antibacterial properties and is used in the treatment of many conditions, especially those affecting the skin. This is sold in New Zealand and many other countries.
An infusion of leaves and bark has been used in the treatment of various ailments.
The crushed leaves and flowers are pleasantly aromatic.
The plant is also used for edible uses. The fresh and pungent leaves are a substitute for fragrant and refreshing tea, of excellent quality; in tasting tests this species has often received higher marks than the traditional Chinese tea obtained from Camellia sinensis.
From the stems and leaves due to some insect bites, it exudes a sweet manna. This was used as a food for children.
Among the agroforestry uses we include how this species can be cultivated as a hedge and is reasonably tolerant to maritime exposure.
It is an important pioneering species in New Zealand. It naturally invades areas of disturbed soil, germinating rapidly and producing a dense cover that excludes weeds and allows native forest trees to establish themselves.
It is excellent for greening bare and eroded slopes and can grow on poorer, colder, wetter and more acidic sites than kanuka. Another benefit of planting manuka for soil conservation is that animals such as sheep, cattle and goats do not eat it with pleasure.
The wood is red in color and is strong and elastic. It is used for inlay work, cabinet making, tool handles, fences etc.
Wood is highly valued and widely used as fuel and to make charcoal [290
It burns extremely hot and slow and is arguably New Zealand’s best native firewood.
Among other uses, it should be remembered that a yellow-green dye is obtained from flowers, branches and leaves; a greenish-black dye is obtained from the flowers and the essential oil obtained from the plant is insecticide.
From an ecological point of view, it is emphasized that the adult mānuka beetle (Pyronota festiva) and its larvae feed on L. scoparium in New Zealand. In addition, various pollinators are known to visit L. scoparium, some examples include Melangyna novaezelandiae, Hylaeus and Honeybees.