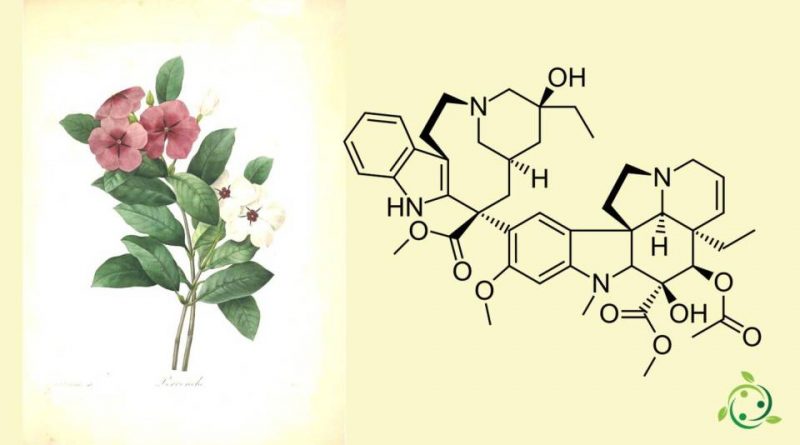 Vinblastine, also known by the alternative name of vincaleucoblastine, is an indole alkaloid with a brute or molecular formula: C46H58N4O9.
Vinblastine derives from an iridoidal precursor and from tryptamine and is naturally present in some plants such as in the leaves of the vinca rosea (Catharanthus roseus (L.) G. Don).
Vinblastine is used in the treatment of cancers, including Hodgkin’s lymphoma, lung, breast and testicular cancers.
This molecule was discovered by Robert Noble and Charles Thomas Beer while examining the periwinkle of Madagascar; it immediately proved to be an effective molecule since, when mixed in tea, it had the effect of significantly reducing white blood cells in the blood.
Vinblastine is part of the vinca alkaloids and belongs to the class of antimicrotubular antiblastics, their mechanism of action is carried out at the level of cellular mitosis, where it prevents the aggregation of microtubules during the formation of the mitotic spindle, thus preventing the tumor cell from completing the division.

The action of vinblastine seems to be associated with the ability to prevent the formation of structures (microtubules) that allow the duplicated DNA to be distributed between the two cells resulting from cell division. By acting in this way, vinblastine slows down or blocks the proliferation of cancer cells.
Vinblastine is given intravenously, usually once a week. The duration of treatment varies depending on the other drugs taken, the body’s response to drug therapy and the type of cancer you are dealing with.
Side effects such as constipation, nausea, vomiting, loss of weight or appetite, stomach pain, diarrhea, headache, dizziness, pain in the jaw, bone or other parts of the body, may occur when treated with vinblastine. hair loss.