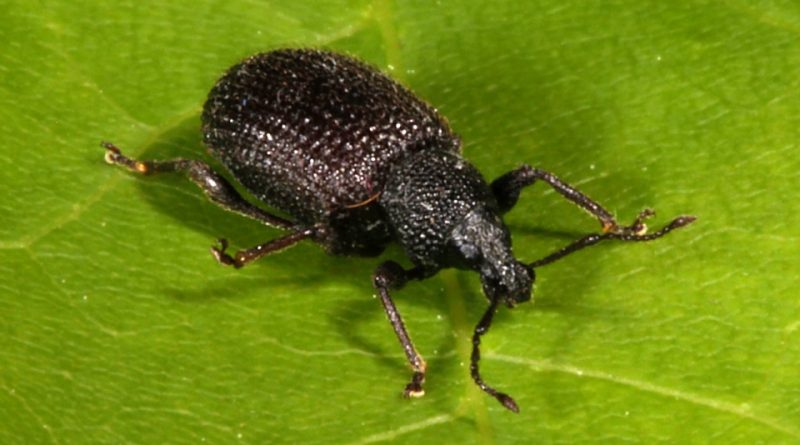 Geographic Distribution and Habitat –
The strawberry oziorrinco is an insect widespread in a vast range that includes North America, South America (in particular Chile), Europe, up to the Scandinavian countries and Australia.
This insect, through the larval stage, affects various plants including strawberries, other agricultural, ornamental and forest herbaceous, shrub and arboreal plants.

Morphology –
The adult stage Otiorhynchus rugosostriatus measures about 7 mm, with blackish color and massive body and with the typical elongated rostrum and have nocturnal habits.
The larvae are apods, whitish in color with an ocher-brownish head; the body is massive and typically “C” curved.

Attitude and Life Cycle –
Strawberry Oziorrinco is a beetle that overwinters in the ground at the larval stage. It reaches maturity in the following spring, after which the adults flicker in the period of June; the adult population is represented almost exclusively by parthenogenetic females who ovipose in later times, at the base of the plants. During the summer, the larvae that cause the damage described are born from these eggs and are destined to overwinter.
The Oziorrinco therefore completes only one generation per year.
Damage to crops is mainly caused by the trophic activity of the larvae, which penetrate the root system by digging real tunnels; during this activity they eat the roots until they break.
Plants thus attacked show stunted growth, wither and wither. The adult stages of this species cause slight damage on the leaf margins, through the nutrition that manifests itself with the erosion of the leaves.

Ecological Role –
The fight against Otiorhynchus rugosostriatus was once mainly of a chemical type.
This was carried out at the moment of the flicker of parthenogenetic females and in any case before oviposition, by means of treatments on the aerial apparatus.
However, the chemical fight directed against the larvae is very difficult because they are hidden in the rhizosphere or inside the niches of the rhizome; therefore it is no longer implemented.
In recent years, biological control systems have been developed using entomoparasitic nematodes of the genus Heterorhabditis. These nematodes are marketed as:
– weed forms formulated on clays (Attapulgite), or “gel” type substances, or (in the USA) partially dehydrated by osmotic way;
– moist organic support inoculated with Nematodes (soil), to be used by mixing it with the cultivation soils, according to the proportions indicated each time, or to be added, as soon as buried, to the soils on site;
– granules dispersible in water containing nematodes in a state of dormancy co-formulated with inerts;
– on inert supports, eg. foam rubber “sponges” containing Nematodes, to be diluted in water.
These nematodes are distributed, generally in aqueous suspension, on very humid substrates at the rate of about 40,000-50,000 units per plant. The nematodes used, after careful irrigation, will actively search for the larvae of the phytophagous.
Furthermore, the containment against this insect must be implemented, as well as with biological control systems, with agroecological systems by increasing the associations of crops with species that do not interest the oziorrinco, with greater rotations and with an overall increase in the biodiversity of the fields. cultivated.