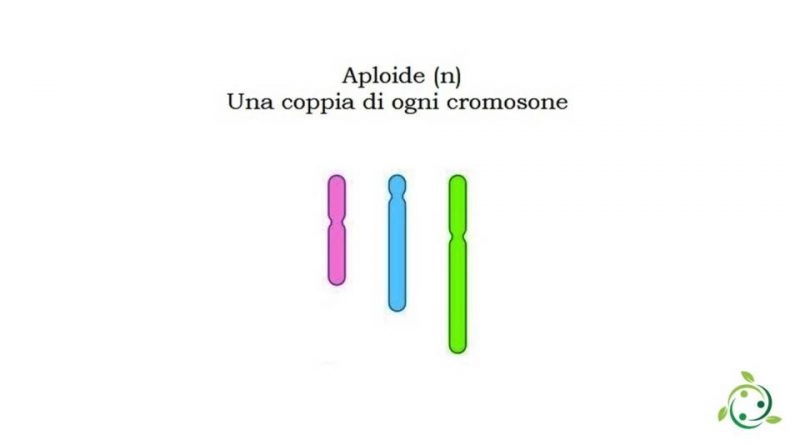 The term haploidy indicates the condition in which a single chromosome set is present in the cell, that is, a single copy of each chromosome. This condition can affect an entire living organism or only some of its cells.
The symbol of the haploid condition is represented with the code n while that of the diploid condition with the code 2n.
In nature a diploid cell, unlike a haploid one, has two genetic heritages, usually inherited from the father and the mother.
Gametes and meiospores are haploid cells, except in some forms of parthenogenesis. Gametes, having a halved chromosomal patrimony, can produce diploid cells through fertilization or give rise to haploid organisms.
The genesis of a haploid cell can take place in two ways:

– or through mitosis of a haploid cell. In this case the starting cell therefore has n chromosomes, which will be duplicated and divided equally in the two daughter cells. For example, in gametophytes the many nuclei are all haploid produced by mitosis;
– or through meiosis of a diploid cell. The starting cell has 2n chromosomes which will be duplicated, obtaining four chromosomal arrangements which will be divided into the four daughter cells (gametes).
The gametophyte of plants and both animal and plant gametes are haploid. After fertilization in the sporophyte of plants and in the somatic cells of animals the normal 2n or diploid number is restored. Haploidy is normally found in some organisms (male bee) due to the parthenogenetic development of the egg.
Aplophase is a haploid phase in the alternation of plant generation. It is represented by an individual, the aplophyte, whose chromosomal set is haploid. When the entire life cycle takes place in the haploid state, the plants are called haplobionts. The embryophytic plants that have the most differentiated and developed haploidy of the diplophase are called haploid.