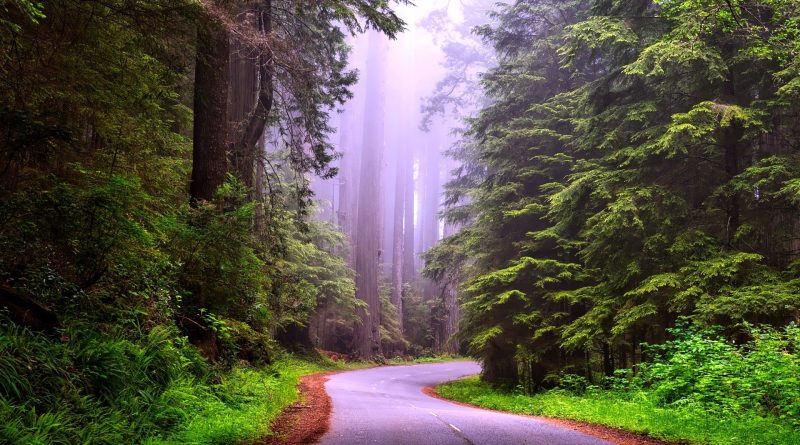 Redwood National Park is a United States National Park located in California along the Pacific Ocean coast.
Redwood National Park takes its name from the tree of the symbolic tree, namely Sequoia sempervirens (Sequoia sempervirens (D.Don) Endl.) Which in the United States is called coast redwood, coastal redwood and California redwood.
Redwood National Park has an area of ​​45,500 hectares and within 45% of the existing sequoias are protected.
Inside there are also grasslands, cultural resources and 60 kilometers of pristine coastline.
Until 1850, the virgin redwood forest covered 810,000 acres of the northern California coast, an area inhabited by Native Americans for 3,000 years; in that period, however, the famous rush to the gold began, which started the deforestation work. The efforts of the “Save-the-Redwoods League”, founded in 1918, to defend three large redwoods, led to the establishment of three state parks: “Prairie Creek Redwoods State Park”, “Del Norte Coast Redwoods State Park” and “Jedediah Smith Redwoods State Park “. The “Redwood National and State Parks”, the park’s official name, was established in 1968, when 90% of the trees had already been felled.
Redwood National Park, along with the other three state parks, have been managed by the Park Service and the California Department of Parks and Recreation since 1994.
Redwood National Park is characterized by an ecosystem that contains numerous endangered animal species such as brown pelicans, tidewater gobies, bald eagles, king salmon, spotted owls and Steller’s sea lions.
For this reason, UNESCO included the park in the list of World Heritage Sites on September 5, 1980 and among the biosphere reserves on June 30, 1983.

Geology –
Redwood National Park, along with the northern coastal region of California, is one of the most seismically active areas in the United States. Frequent (low-grade) earthquakes have led to river shifts and coastal erosion. The North American, Pacific and Gorda plates are tectonic plates that meet at Cape Mendocino, only 160km southwest of the park. In the 1990s there were nine earthquakes of at least six degrees of magnitude along this fault, and there is the possibility of a large earthquake. Park managers inform visitors of the potential danger through the use of leaflets and information boards around the park. The tsunami danger is particularly felt, and visitors to the coastal area are told to reach raised points following the earthquakes.
From a morphological and geographical point of view, the park contains both beaches and mountains. Most of the rocks belong to the Franciscan Assemblage, which rose from the ocean millions of years ago. These sedimentary rocks are mainly sandstone, silt rock and clay and, to a lesser extent, metamorphic rock such as quartz silicon and chlorastrolite. This kind of rocks are easily eroded, and are particularly visible along the coast and where rivers and streams form small eddies. Formed during the Cretaceous period, they are deformed by the processes of elevation and depression. In some areas the rivers have formed river deposits of sandstone and conglomerates, transported downstream until they reach the park. Redwood Creek follows the Grogan fault; schist and other metamorphic rocks are found along the western coast of the inlet, while the sedimentary rocks of the Franciscan Assemblage are found on the eastern side.

Climate –
Redwood National Park is greatly affected by the air currents that blow from the Pacific Ocean.
There are therefore temperatures that generally oscillate between 4 and 15 degrees centigrade during the year, while in the hinterland the summers are hotter and drier, and the winters colder. Redwoods grow at least 2/3 kilometers from the coast, but no more than 80 kilometers. In this belt there is a great humidity due to heavy winter rains and summer fog. During the winter, more than 250 cm of rain fall, while snow is almost non-existent at altitudes below 450 meters above sea level. Humidity and fog are necessary for the survival of the park. 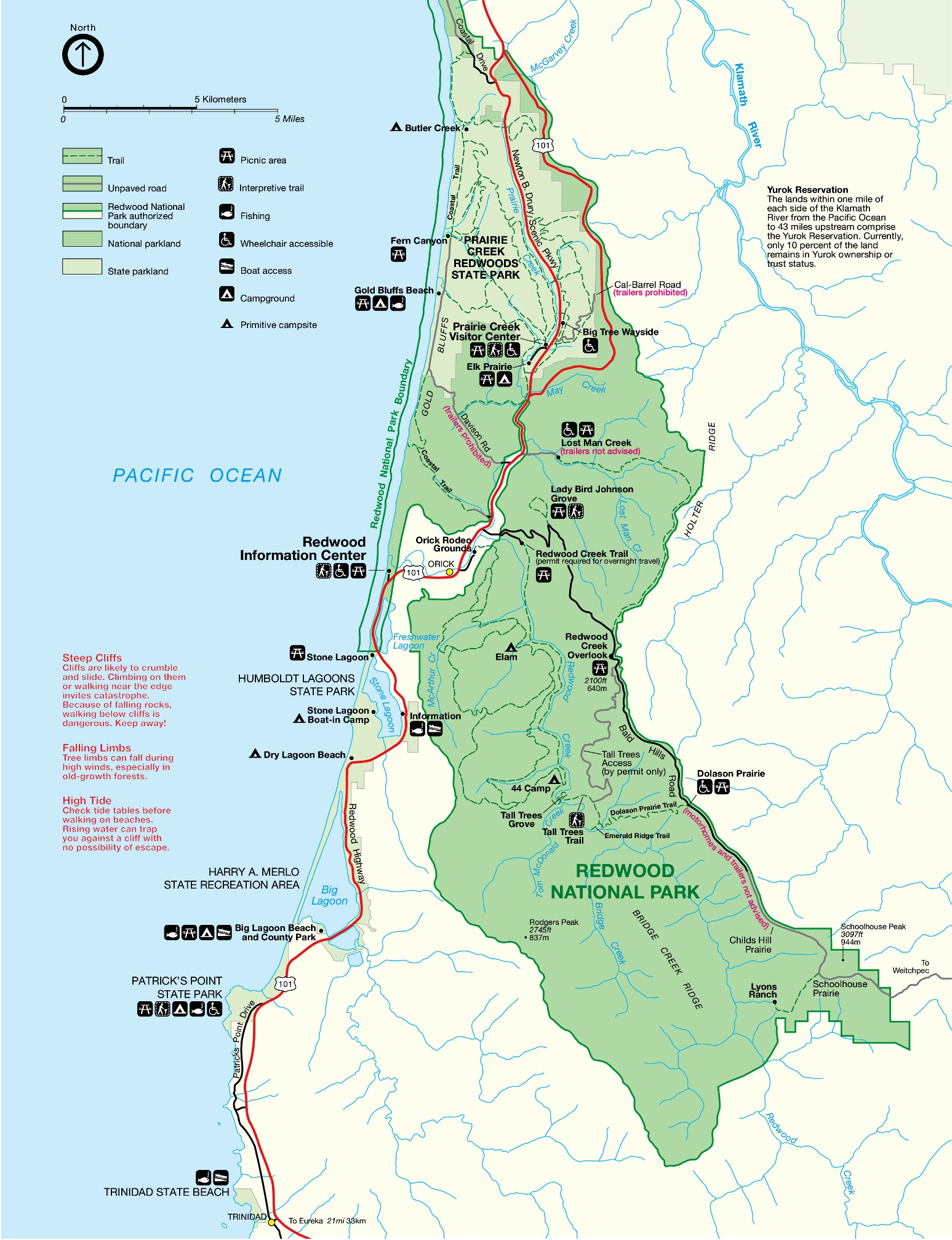 Flora –
As mentioned, prior to the great gold rush, which in some ways changed entire landscapes of the United States, an estimated virgin redwood forest existed covering 810,000 hectares of the coastal area of ​​California. To date, only 4% is left, about 34,000 hectares, and 45% of them are contained in the park. This forest stretched from northern California to the southern Oregon coast. This tree species is closely related to the giant sequoia of central California, located in Sequoia National Park and, in a more detached way, to the metasequoia, indigenous to the Sichuan-Hubei region of China.
As is known, the sequoias of the sempervirens species are the tallest trees in the world, with trees measuring over 110 meters and only the Giant Sequoia exceeds these trees by mass.
Coastal redwoods live an average of 600 years, and some over 2,000 years, making them one of the longest-lived living organisms in the world. They are particularly disease resistant due to the thick protective bark. These trees prefer steep terrain, slightly inland and near water sources such as rivers and streams, and are among other things the fastest growing trees in the world.
They develop huge trunks that accumulate organic principles and can feed the huge trunks that grow above them. Usually this happens over 50 meters in height. Scientists recently discovered that plants growing in forests can survive even on these soils. The land is home to invertebrates, mollusks, earthworms and salamanders. During the drought season the tops of some trees die, but this does not imply the death of the whole tree which, instead, continues to grow. Redwoods have developed the ability to regenerate new trunks from branches. These secondary trunks, called, reiterations, also develop root systems at their base. This method allows to bring the water also to the upper layers of the plants. Typical coastal fog provides about one third of the annual water requirement.
Another typical plant of the place is Duglasia, with specimens of Douglas fir that reach 90 meters. Sitka spruces are abundant along the coasts and adapt to salty air better than other species. The evergreen tanoak produces fruit similar to the acorns of oaks. Tanoak and oaks are both members of the Fagaceae family. Inside the park there are also madrons, macro-leaved maples, California laurels and red alders.
In the under-wood we find huckleberries, brambles and raspberries which provide food for many animal species. Rhododendrons and azaleas are common species in the park, especially in the virgin forest. Ferns are prolific, especially near large water sources. Within Prairie Creek Redwoods State Park, Fern Canyon is a haven for ferns that live along the ten to fifteen meter deep walls.

Fauna –
Inside the Redwood National Park live animals that are now at risk of extinction due to the subtraction of habitats carried out by man.
Among these, the American spotted owl (Strix occidentalis caurina) is one of the endangered species living in the park
The ecosystem of the park allows the life of many rare animal species. To be precise, there are many ecosystems: ocean coasts, rivers, grasslands and dense forests. The brown pelican and the tidewater goby are listed on the federal endangered species list. The bald eagle, which usually lives near water sources, is also part of the list drawn up by the U.S. Fish and Wildlife Service. King salmon and Steller’s sea lions are among the endangered aquatic species.
Over 40 mammal species have been documented, including black bears, pumas, bobcats, American beavers, North American river otters, black-tailed deer, wapiti and coyotes. Along the coasts, California sea lions and common seals live near beaches and seastacks, rock formations created by erosion that have transformed pieces of the coast into small islands. Occasionally dolphins or gray whales can be spotted offshore. Deer are the most numerous mammals in the park. Different species of bat live in the park, for example the brown serotins, and other small mammals such as the Douglas squirrels and the Northern walleye spend a good part of their life raised from the ground.
Brown pelicans and double-crested shag are the most common birds along the coasts and on the rocks, while the colopacids and gulls inhabit the more internal areas. Inside there are also species accustomed to fresh water, such as gooseberries, osprey, red-shoulder buzzards, great blue herons and Steller’s jays.
Reptiles and amphibians are also guests of the park, especially snakes, frogs, giant Pacific salamanders and newts.