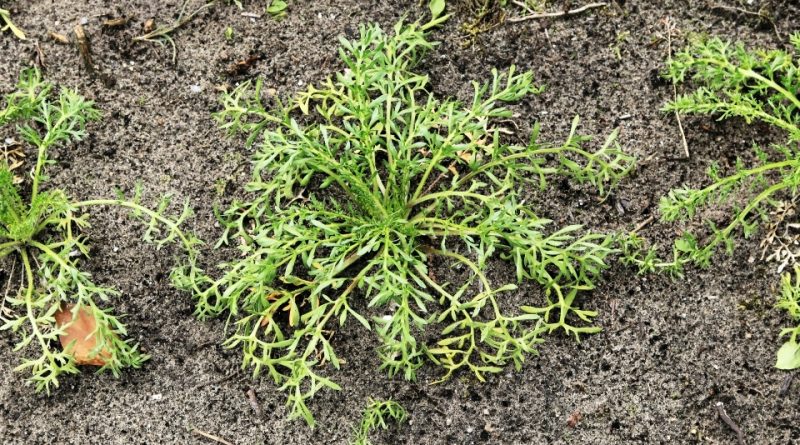 Etymology –
The term Lepidium comes from the Greek λεπίδιον lepídion diminutive of λεπίϛ lepís squama (of fish), scales: due to the shape of the siliquettes similar to small scales.
The specific meyenii epithet was attributed in honor of the German ornithologist and botanist Franz Julius Ferdinand Meyen (1804-1840).

Geographic Distribution and Habitat –
Maca is a plant native to South America where it is also grown in the Andes of Peru and Chile as a vegetable.
In nature, its habitat is that of arid steppes, tundra and alpine plains, generally in calcareous and clayey soils, at altitudes between 3,800 and 4,800 meters. 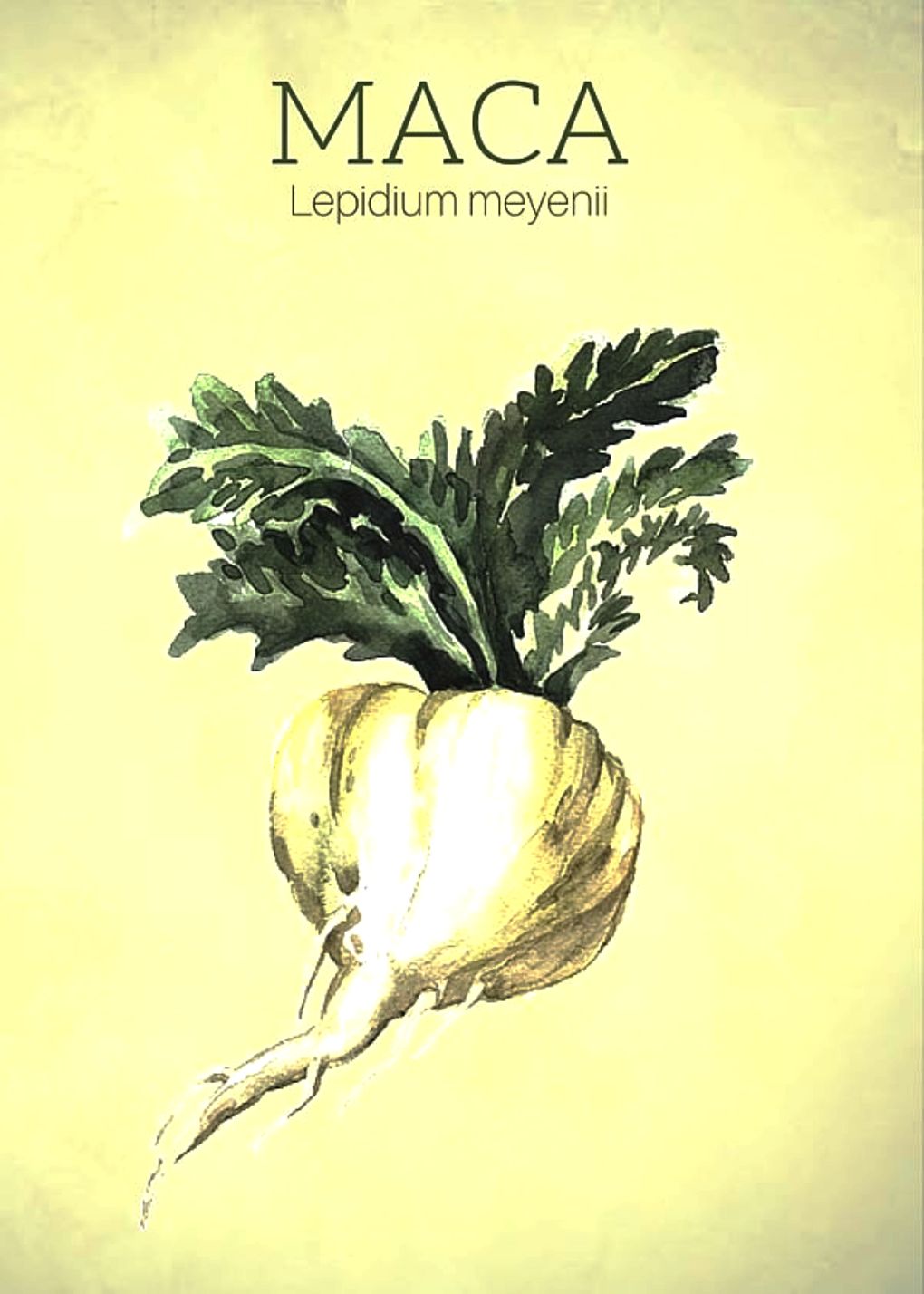 Description –
Lepidium meyenii is a perennial herbaceous plant with 12 – 20 cm long drooping stems that extend over the ground and form a carpet of vegetation.
It has a root that can be of different colors: yellowish-golden, whitish, red, purple, blue, green or black.
The root resembles a small pear in both size and shape and has a diameter of up to 8 cm.
From the basal part of the plant a large foliation with a basal rosette is formed (the outer peripheral leaves age and deteriorate on the ground, but are continually replaced by new ones that form in the center).
The plant then produces an erect flower stem, with racemic inflorescence with many small white or whitish flowers.
The fruits are small siliques and the seeds are very small and colorful.

Cultivation –
Maca is a plant grown as a vegetable in the Andes of South America and is probably a species grown at higher altitudes than any other food crop; it is in fact cultivated in the Peruvian and Bolivian highlands at an altitude normally above 3900–4100 m s.l.m., but more frequently between 4200 and 4500 m; this indicates its adaptation to a sunny climate but, even in the equatorial belt, rather cold, with modest annual excursions.
Reproduction is practiced exclusively by seeds.
However, it is a demanding plant, which exhausts the soils; the soils are usually well fertilized with manure from the herbivores of the plateau and, as a rule, in the places of origin, soil management has been practiced for millennia which leaves the fields in rest after a limited number of years of use.
The root can be of different colors: yellowish-golden, whitish, red, purple, blue, green or black and the color of the roots is also related to the color of the seeds. Plants with different root colors are considered to be distinct varieties, with distinct characteristics that are currently under more thorough investigation.
Due to its particular characteristics of climatic adaptation, with a cool if not cold climate, maximum + 16 / + 18 ° C, minimum -5 ° C, therefore with scarcity of parasites and heat-related diseases, and the life cycle of maturation of the root, of at least 8-9 months (similar to other roots and tubers of that environment, such as the Goose and the Oluco), cultivation in different climates, i.e. in a warmer climate, or with clear and distinct seasons is problematic , which alternate warmer temperatures with much colder ones.
This plant prefers a pH in the range of 6.5 – 7.5, tolerating 6 – 8.5, requires a sunny location, and prefers well-drained soil with medium to heavy slurry.
It grows best in areas where annual daytime temperatures are between 12 and 18 ° C, but can tolerate 3 – 22 ° C.
Plants grow in areas where frosts are common during the growing season and are said to tolerate temperatures down to at least -10 ° C, possibly -20 ° C if you give a good mulch.
It also prefers an average annual rainfall in the range of 600 – 800 mm, but tolerates 500 – 1,000 mm.
The plant is said to deplete the soil in which it is grown. In South America it is grown on a 10-year rotation, leaving the fields fallow for the next nine years to recover before their next harvest. The problem is most likely to lie in the nutrient-poor and fragile soils the plant is usually grown in, rather than the greed of the plant.
The roots are usually harvested 6 – 7 months after sowing the seed, although it can take 9 months to mature. Yields of 20 tons per hectare are possible.

Customs and Traditions –
Maca is considered a food plant and, traditionally, a medicinal plant. In Spanish and Quechua we refer to this plant with the following names: maca-maca, maino, ayak chichira, and ayak willku.
Some historians, such as Friar Antonio Vásquez de Espinoza in a description of the year 1598, mention the consumption of this plant by the local populations, as did Cobo later in the period from 1603 to 1629. Later they describe it in detail. other Spanish botanists, such as H. Ruiz in his Expedición Botánica al Virreinato del Perú.
The plant is grown for its edible root (hypocotyl). In addition to its use as a food, it is used in folk medicine as a tonic, to increase physical and mental faculties. The Andean populations from ancient times have also used it to improve and solve fertility problems and improve sexual performance.
Recent research has made it clear that hypocotyl, or root, has a significant influence on libido in humans, without however changing the amount of circulating testosterone. It can also help improve the nutritional content of the diet and support physical vigor and, ultimately, well-being in general in human activities; this obviously happens in the case of substantial food shortages where, as is well known, the first activities that are compromised are sexual and reproductive ones. In fact, the root contains up to 60% carbohydrates and at least 10% proteins, as well as vitamins and a remarkable range of microelements.
Another possible use of the plant is represented by the contrast of hair loss in menopause. The high content of beta-sitosterol inhibits DHT which is the main cause of androgenetic alopecia.
Among the edible uses is the cooked root which is sweet and pleasantly flavored.
The roots as well as cooked can be roasted, dried and boiled or used to prepare juices, porridges, jams, etc.
The roots, in the Andean tradition, after being dried, are cooked in water to make an aromatic sweet porridge which in South America is called ‘mazamorra’.
The nutritional value of dried Maca root is high, similar to grains such as corn, rice and wheat. It has 60% carbohydrates, 10.2% protein, 8.5% fiber and 2.2% lipids. It also has a large amount of essential amino acids and higher levels of iron and calcium than potatoes.
Maca contains significant amounts of fatty acids including linolenic, palmitic and oleic acids. It is rich in sterols and also has a high mineral content.
The dried root contains about 13 – 16% protein and is rich in essential amino acids.
The fresh root is unusually rich in iodine and iron and also contains small amounts of alkaloids, tannins and saponins.
As for medicinal uses, Lepidium meyenii is a little known herbal remedy and high energy food. It is growing in popularity due to its energizing effects, improved fertility and aphrodisiac qualities. Other traditional uses include increasing energy, stamina and endurance in athletes, promoting mental clarity, treating male impotence, and helping with menstrual irregularities and female hormone imbalances including menopause and fatigue syndrome. chronic.
The roots are anti-fatigue, aphrodisiac, nutritive, immunostimulating, steroidal and tonic.
Maca, like all crucifers, contains glucosinolates and isothiocyanates which have been shown to exhibit anticarcinogenesis by blocking the formation of endogenous or exogenous carcinogens and thus preventing the onset of carcinogenesis.
Natural and synthetic isothiocyanates are among the most effective known chemopreventive agents.
A wide variety of isothiocyanates prevent cancer of various tissues including rat lung, mammary gland, esophagus, liver, small intestine, colon and bladder.
The data, on which adequate scientific research has yet to be done, suggests that maca has the same effect. Surprisingly, there is no apparent traditional use of maca in the treatment of cancer.
In traditional Peruvian herbal medicine, Maca is used as an immunostimulant and in the treatment of anemia, tuberculosis, menstrual disorders, enopausal symptoms, stomach cancer, infertility and other reproductive and sexual disorders, as well as to improve memory.
A chemical analysis conducted in 1981 showed the presence of biologically active aromatic isothiocyanates, in particular p-methoxybenzyl isothiocyanate, to which aphrodisiac properties are attributed.
The initial analysis of maca indicates that the effects on fertility are a result of glucosinolates. Alkaloids are also present, but not yet quantified.

Preparation Method –
Lepidium meyenii is a plant used since ancient times in the food and medicinal tradition of some Andean peoples.
The dried roots of this plant are preserved well, so much so that analysis on 7-year-old roots confirmed that these still had 9-10% protein.
The dried roots are brown, soft and sweet with a musky flavor, retain their flavor for at least 2 years.
The roots are eaten cooked but can be roasted, dried and boiled or used to prepare juices, porridges, jams, etc.
The roots, in the Andean tradition, after being dried, are cooked in water to make an aromatic sweet porridge which in South America is called ‘mazamorra’.
Even the young leaves can be eaten both raw and cooked and have a spicy flavor similar to watercress.