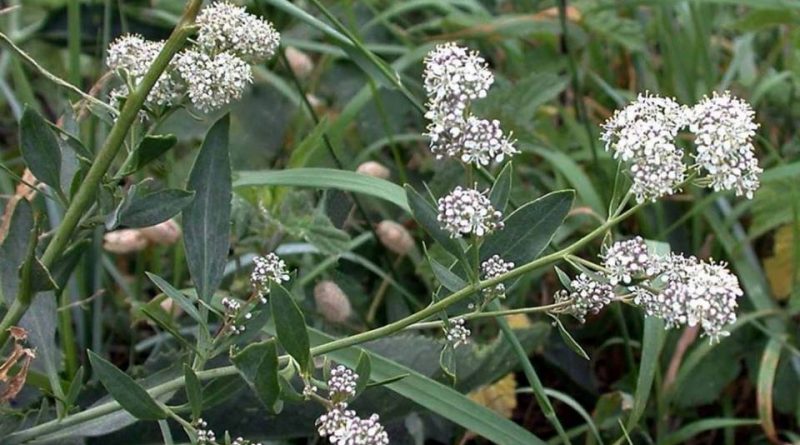 Etymology –
The term Lepidium comes from the Greek λεπίδιον lepídion diminutive of λεπίϛ lepís squama (of fish), scales: due to the shape of the siliquettes similar to small scales.
The specific epithet latifolium comes from latus largo, extended and from fólium leaf: with wide leaves.

Geographic Distribution and Habitat –
Lepidium latifolium is a plant native to southern Europe, the Mediterranean countries and Asia up to the far east of the Himalayas.
This species has been introduced in various countries, such as North America, where it grows in the United States, Mexico and Australia, where it has become invasive in many areas.
In Italy it is present in many regions, from the northern ones to Sicily, but with many gaps.
Its growth habitat is that of fields, half-shaded places, woods, prairies and saline environments at altitudes between 0-1000 meters above sea level. 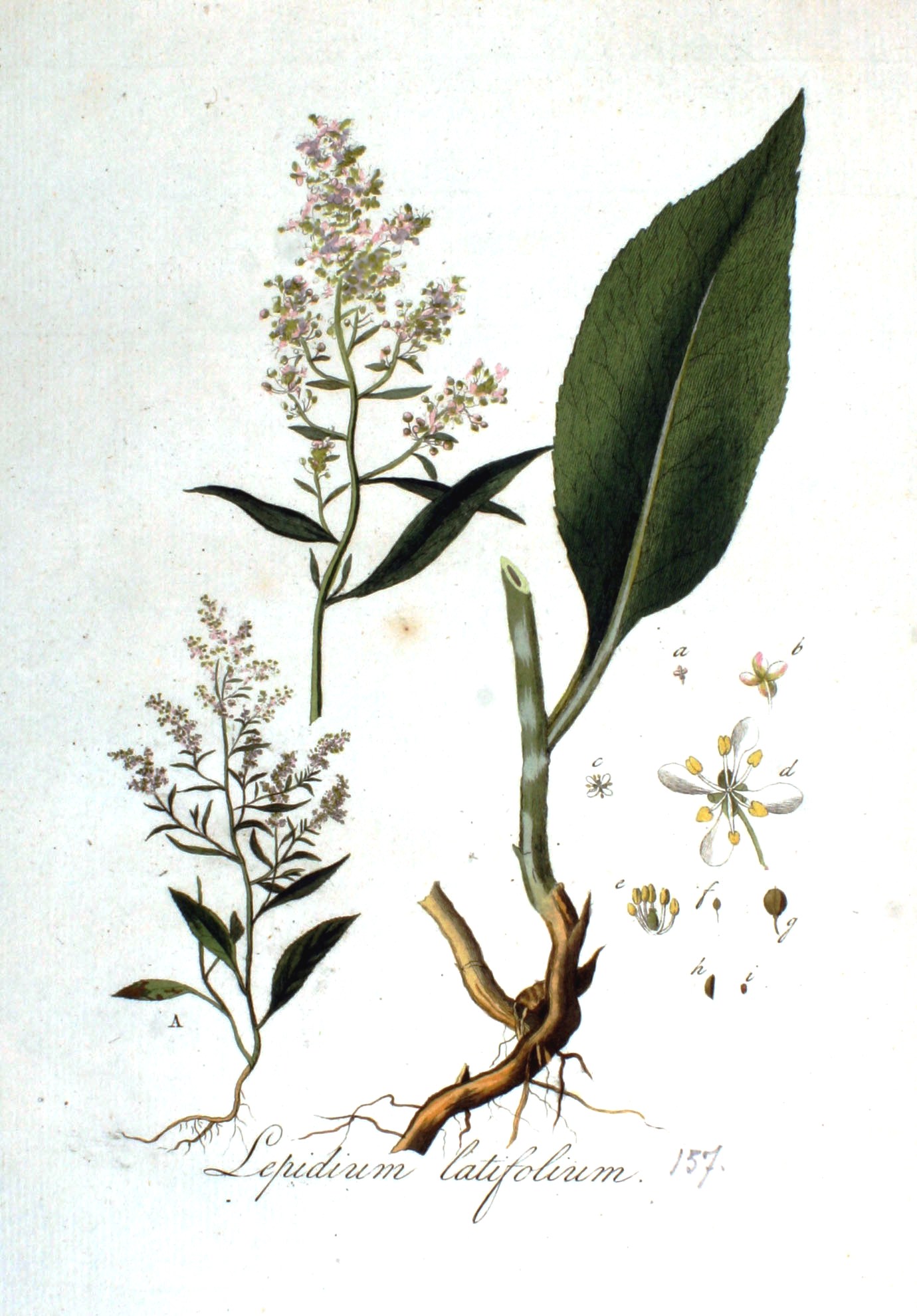 Description –
Lepidium latifolium is a perennial herbaceous plant that normally grows between 30 centimeters and 1 meter, but can reach a height of 2 meters.
It has a very extensive root system that can reach over 2.5 meters deep and constitutes 40% of the total biomass of the plant.
The plants have numerous woody stems, alternating with waxy leaves and clusters of small white hermaphroditic flowers.
Flowering occurs in the summer (June – July) and pollination is entomophilous.
It produces small fruits which are 1.8-2.3 x 1.5-2 mm siliquettes, from suborbicular to elliptical, slightly fringed, pubescent, with a 0.2 mm stylus.
The seeds are 1-1.2 x 0.8.1 mm, from ovoid to subglobose, wingless, papillose, reddish brown in color.

Cultivation –
Lepidium latifolium is a perennial herbaceous plant native to the coasts of north-eastern Europe.
It is a very easy plant to grow, growing on most soils in the sun or light shade.
This plant was once grown for food purposes in Great Britain and ancient Greece.
It is a very invasive plant, capable of spreading more than one meter per year thanks to its aggressive root system and every year it produces new growth at the beginning of the spring season and can be harvested as a useful ingredient for salads.
Propagation can take place by seed with sowing to be carried out in spring in the seedbed and with subsequent transplantation as soon as the seedlings are large enough to be handled.
It can also propagate by division of the tufts in spring directly in their permanent positions. The division is very simple and succeeds at almost any time of the year.

Customs and Traditions –
Lepidium latifolium is a plant native to a vast range that includes southern Europe, Mediterranean countries and Asia and which, imported into other countries, has become a pest as in some areas of the United States or other areas of the world.
It is a plant that was once also cultivated for food purposes and whose young leaves and shoots are edible and recall the taste of cabbage and mustard, as well as being pleasantly spicy. Young foliage is usually eaten fresh, while older leaves can be cooked and prepared like spinach. The root of Lepidium latifolium is also edible and curiously reminiscent in taste that of watercress.
In Ladakh, in the Himalayas, spring leaves are valued as a vegetable. The peppery or bitter edge is removed by first boiling the young shoots and leaves, then soaking them in water for two days. Cooked like spinach, it is a nutritious vegetable.
The plant also has medicinal properties and can be used as an antiscorbutic, purifying, hepatoprotective, resolving, stomachic.
Among other uses other uses the dried stems of Lepidium latifolium are sometimes used in flower arrangements.

Preparation Method –
Lepidium latifolium is a plant used since ancient times for both food and medicinal purposes.
Among the edible uses are used raw or cooked young leaves and have a very spicy taste similar to watercress.
The leaves are pleasant when used in small quantities as a dressing in salads.
The leaves are already available very early at the end of the winter period so this could be one of the reasons for its food use.
The roots can be grated and made into a sauce that is used as a substitute for horseradish; it has a pungent spicy flavor.
The seeds are also used as a condiment.
In medicinal use, an infusion can be prepared from the plant which is used in the treatment of liver and kidney diseases, increases heart amplitude, decreases the frequency and regulates the rhythm; it is also used as in the treatment of skin diseases.