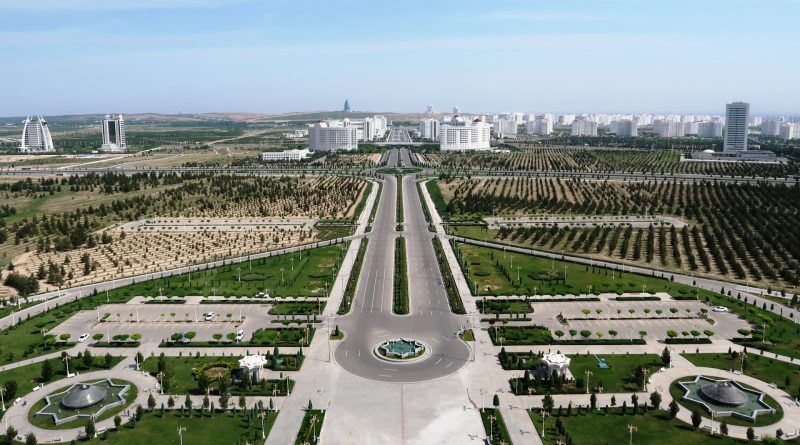 Turkmenistan is a presidential republic located in Central Asia.
This country has a population of 5,662,544 inhabitants (2016), with capital Aşgabat, with 1,031,992 inhabitants (2012).
Turkmenistan borders Iran, Afghanistan, Uzbekistan and Kazakhstan and faces the Caspian Sea. It is the second largest economic power in Central Asia (after Kazakhstan) thanks to its fields rich in natural gas and the cultivation of cotton.

Geography –
Turkmenistan has an area of ​​491,000 km², making it the second largest state in Central Asia after Kazakhstan.
This country is characterized by a spectacular and varied landscape despite the fact that the Karakum desert occupies almost 90% of the entire national territory. To the east are the canyons and lush mountains of the Kugitang Nature Reserve, while to the south, the Kopet Dag range rises towards the Caspian. The Kopet Dag mountain range makes up most of the border between Turkmenistan and Iran. The highest peak in Turkmenistan is Ayrybaba. The territory close to the Caspian Sea is particularly unusual: the canyons north of Türkmenbaşy, the multicolored mountains and the lunar landscape of many areas make it one of the most beautiful corners of the country.
The main rivers are the Amu Darya (the ancient river Bone), which flows along its northeastern border towards the Aral Sea, the Tejen and the Morghab.

Climate –
Turkmenistan is characterized by a continental climate, mainly arid desert with large temperature excursions and low rainfall that falls mainly in spring.
This climate is characterized by significant thermal excursions between winter and summer. It is often accompanied by rather low winter temperatures that allow the snow cover to persist, while summers can be extremely hot, often muggy. The distance from the sea does not allow for high humidity and consequently rainfall is generally limited. 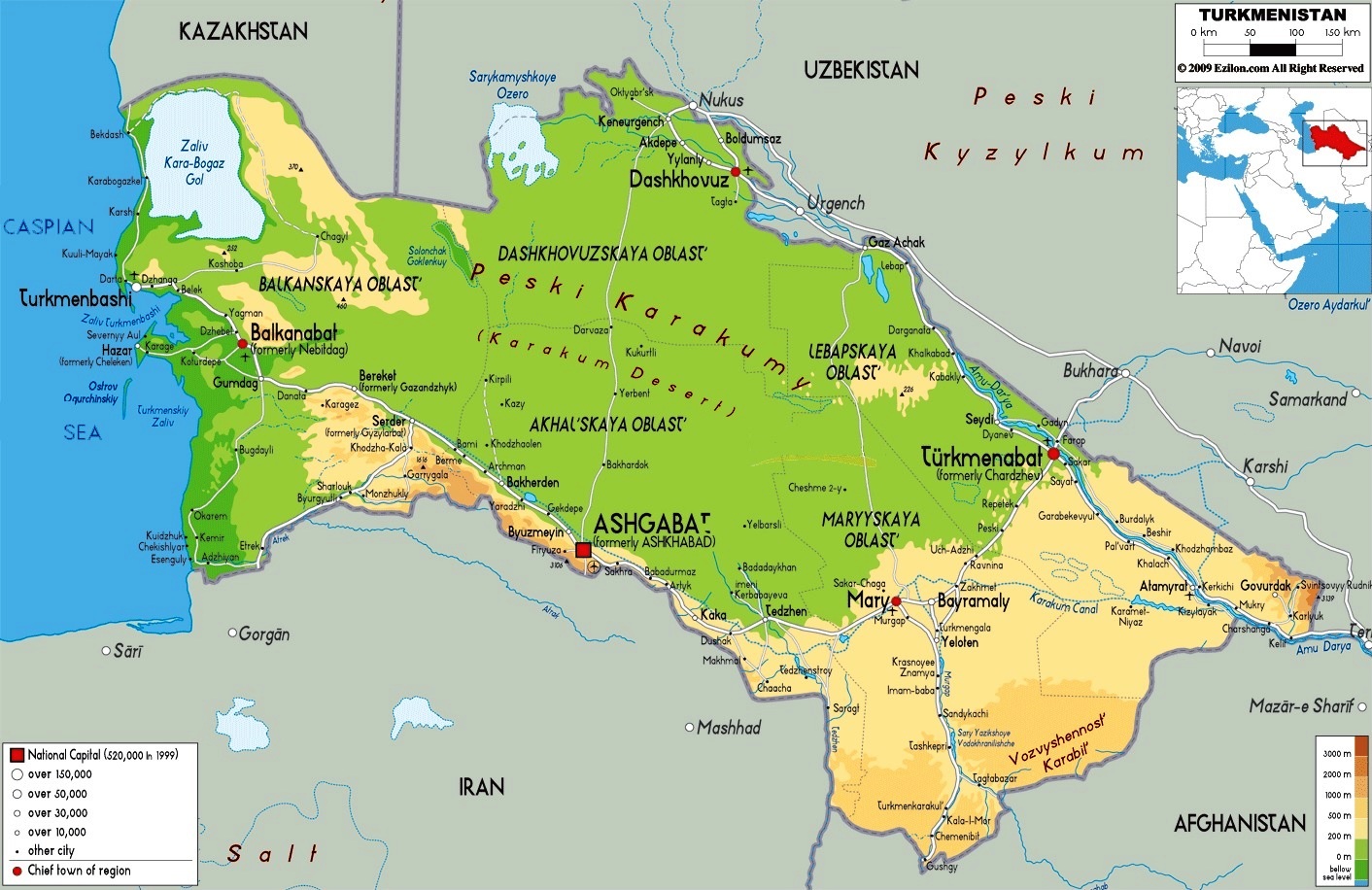 Flora-
Much of Turkmenistan makes up the Central Asian Southern Desert ecoregion, which includes the Karakum Desert, the southern part of the Kyzylkum Desert, and other areas with rolling dunes, sandy plateaus, and floodplains. This area receives practically no rain during the summer and the extreme heat means that vegetation grows little at this time of year. In winter, some rainfall occurs with much cooler temperatures, and herbs such as Bromus and vascular plants such as Malcolmia, Koelpinia and Amberboa sprout. Ephemeral plants appear in March and April, including foxtail lilies, Rheum, tulips and Bethlehem stars, but at the end of May these have given way to summer drought. The Salsola communities grow on the alluvial plains together with asafoetida, Ephedra strobilacea, black saxaul and white saxaul. Acacia sand and various Calligonum species grow among the dunes.
The coastal strip is made up of sandy and clayey salt deserts recently discovered by the retreating coast. It has unconsolidated dunes and is sparsely vegetated with salt-loving plants. This area, with its milder climate and the mists that sometimes come from the Caspian Sea, is home to many of the country’s 90 lichen species. Another environment rich in lichens are takirs which form in the form of flaking crusts on dried clay plains.

Fauna –
Turkmenistan has a wide range of habitats within which a great variety of animal species live.
There are 91 mammal species recorded in the country, some of which are threatened. There are bats in the caves, leopards, bears, mountain sheep, wild asses and goiter gazelles in the mountains and seals in the Caspian Sea. In the deserts you can find the long-eared hedgehog, Brandt’s hedgehog and the tolai hare, as well as gerbils, jerboa and other rodents.
Endangered mammals include Blasius’s horseshoe bat, two subspecies of the Eurasian brown bear, Eurasian lynx, Asian cheetah subspecies (extinct), leopard, striped hyena, Pallas’s cat, cat of the sands, the caracal, the Caspian seal, the deer, the Turkmen wild goat, the markhor and the Turkmen mountain sheep. The large Balkan mouse-like hamster is one of several endemic mammals to this region. Another is the Turkmen ratel, a subspecies of the honey badger.
Reptiles are also abundant, with 82 species recorded. Some of the most notable include the desert monitor lizard, European marsh turtle, Caspian tortoise, Russian tortoise, dice snake, and the Trans-Caspian saw-scaled viper. There are also skinks, geckos, agamis, wall lizards, the European legless lizard, vipers, rat snake and the blind worm snake. Another native species is the Turkmen eyelid gecko. Amphibians are much more scarce, with 5 species recorded including the green toad and the marsh frog. In addition to freshwater fish in streams, rivers and lakes, the Caspian Sea is home to 124 mostly endemic fish species.
Nearly four hundred bird species have been recorded in the country. Many of them are sedentary species, but others are migratory and only passing through, while still others overwinter in Turkmenistan. Some of these are the ducks, geese and swans that inhabit the shores of the Caspian at this time of year. The largest lake in the country is Lake Sarygamysh, on the border with Uzbekistan; this is now a nature reserve and attracts wild birds including pelicans, coots and cormorants. Yeroylanduz is a 300 square kilometer natural depression that floods every year and attracts pelicans, flamingos and other birds.
Birds commonly seen in Turkmenistan include the crested lark, chukar partridge, common pheasant, rock dove, European dove, and eastern dove. Raptors include the Eurasian sparrow hawk, shikra, long-legged buzzard, black kite and kestrel. Passerines that are frequently encountered include great tits, flycatchers, nightingales, finches, buntings, blackcaps and shrieks.
But the best known animal, among the many interesting ones that populate Turkmenistan, is the Akhal-Teke, a horse with a coat with golden shades considered one of the ancestors of modern thoroughbreds. Dromedaries are widespread everywhere and it is possible to see them wandering among the villages and towns.