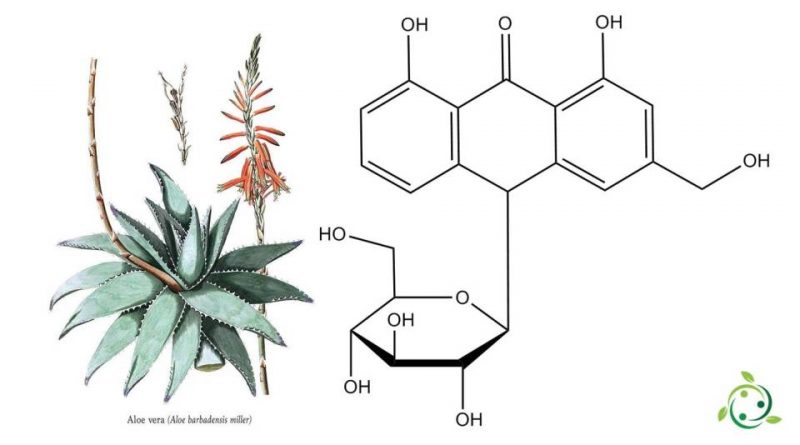 Aloin (or barbaloin) is a substance of plant origin with a brute or molecular formula: C21H22O9.
From a chemical point of view, aloin is an anthraquinone glucoside, which means that its anthraquinone-type skeleton has been modified by adding a sugar molecule. Aloe emodin is the aglycone of aloin.
Aloin is a bitter organic compound, yellow-brown in color, present in the parenchyma of at least 68 species of succulent plants all belonging to the genus Aloe.
The aloin that is extracted from plants is composed of a mixture of two diastereomers, called aloin A (or barbaloin) and aloin B (or isobarbaloin), with very similar chemical properties.
Aloin has a detoxifying, antibiotic and anticancer action as well as a laxative.
Part of the properties of Aloe juice are due to aloin.
Pliny the Elder also described the therapeutic uses of aloe juice to treat wounds, stomach ailments, constipation, insect bites, oral problems.

The Ancient Romans in fact exploited aloe for its healing properties: it was used in the form of balm for the treatment of war wounds of soldiers. During the Middle Ages and the Renaissance the medicinal use of aloe spread in Europe, and its use for curative purposes was also introduced in the New World, perhaps by the Spanish missionaries. From that moment the cultivation of the plant spread first in the Caribbean and then in Mexico and South America.
We must arrive to 1851 when two English researchers, Smith and Stenhouse, isolated the aloin, while in 1935 Creston Collins and his son revealed in a report that later became famous, the possible use of aloe to treat the devastating effects of radiation.