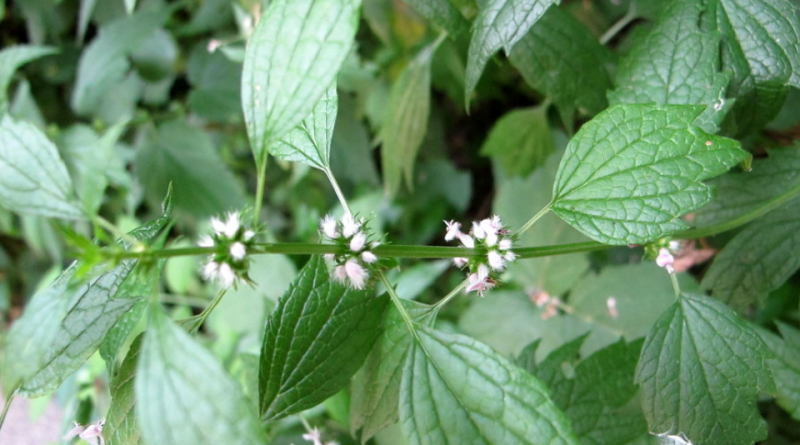 The motherwort (Leonurus cardiaca L., 1753) is a perennial herbaceous species belonging to the Lamiaceae family.

Geographic Distribution and Habitat –
The motherwort is a plant with Eurasian-South European origin.
It is present in Italy, of ancient introduction, and is found only in the North (it was introduced as a medicinal plant and then naturalized). In the Italian Alps it is present with discontinuity, beyond the border (always in the Alps) it is found in France and Switzerland (always in a discontinuous way), while it is present everywhere in Austria and Slovenia. On the other European reliefs connected to the Alps it is found in the Black Forest, Vosges, Jura Massif, Central Massif, Balkan Mountains and Carpathians.
In the rest of Europe it is found almost everywhere with a more or less continuous distribution up to China.
The typical habitat for this species are uncultivated, ruderal areas, walls, river beds and fertilizers on a preferred calcareous substrate but also calcareous / siliceous with basic pH, high nutritional values ​​of the soil that must be dry. It is present from sea level up to 1400 m s.l.m .. It often grows with Chenopodium album, Geum urbanum, Lamium maculatum etc .. 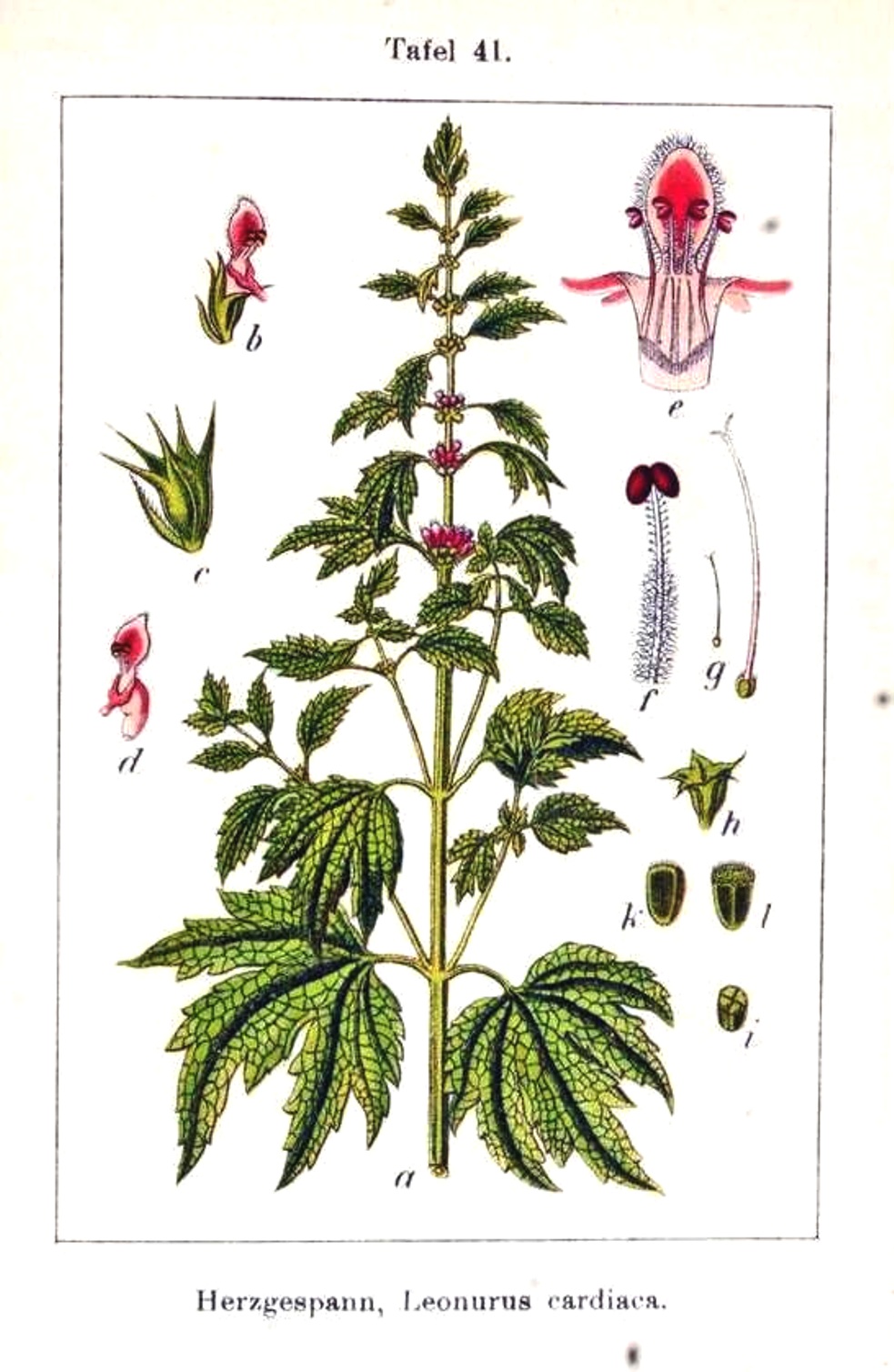 Description –
Leonurus cardiaca is a herbaceous plant with an erect posture and a quadrangular and rigid stem.
It is a branched perennial plant rich in leaves that can reach a height of 1.5 m.
The leaves have the upper page of dark green color while the lower page of light gray color and are lobed palmate, petiolate with marked veins.
The flowers are tomentose, about 12 mm long, white or purple-pink in color, with the lower lip characterized by purple spots.
The schizocarpic fruit is a microbasarium (tetrachenium) with 4 mericarps (achenes or nucule) of 2.5 x 1.6 mm, trine or tetrahedral, truncated at the base and hairy on the upper face, light brown in color.

Cultivation –
The motherwort is a plant that is easy to grow, both in open fields and in pots as long as it faces south.
Propagation is by seed and to obtain a faster and more uniform germination, the sown bed can be covered with TNT (non-woven fabric), if a garden or soil is available, otherwise if a pot is used, it will be covered with a transparent film (like the one used in the kitchen) fixed with an elastic band.
This expedient allows you to accelerate germination, which will happen in 7-10 days. Once germinated, the seeds will have a rather fast growth, considering that from sowing to flowering (it will take about 90-120 days) the plant can reach 2 meters in height under favorable conditions. At the time of planting (both in open ground and in pots) it is advisable to fertilize abundantly, given the fast growth, and then you will have to limit yourself to providing enough water during the growing season, especially in the warmer regions.

Customs and Traditions –
Leonurus cardiaca was imported from Asia towards the seventh century and then spread throughout almost all of Europe, excluding the Mediterranean regions.
In the fifteenth century it was cultivated in the gardens of monasteries and a hundred years later the French doctor Ambroise Paré mentioned and spoke of the healing properties of Cardiaca, as an effective plant for heart ailments of a nervous nature such as heart palpitations.
In ancient times it was used, as well as a remedy for palpitations, for menstrual pains, gastric disorders and also as a healing agent.
In fact, the chemical analysis of the substances contained in this plant reveals the presence (0.17%) of a glycoside, an acid saponin of an essential oil, tannic acid, various resins, fats and other organic acids.
In detail, it contains the alkaloid leonurine and, among other chemical constituents, also stachhydrin, bitter iridoid glycosides (leonuride), diterpenoids, flavonoids (including rutin and quercetin), tannins, volatile oils and vitamin A. Stachhydrin is extracted from its leaves and has demonstrated various bioactivities for the treatment of fibrosis, cardiovascular disease, cancer, uterine disease, brain injury and inflammation.
Probably a mixture of these substances, in the form of syrups, have a sedative action on the central and vegetative nervous system as well as on the cardio-vascular system.
Nicholas Culpeper, who was a British physician, botanist, and astrologer, considered the herb useful for removing melancholy vapors from the heart, improving cheerfulness and fixing mothers’ wombs. In 15th-century Europe, this plant was considered by some herbalists as a protection against evil spirits.
Among other uses, a dark olive-green dye for fabrics can be obtained from Leonurus cardiaca by means of decoctions.
This plant also has food uses and in the kitchen the flowers, both fresh and dried, are used as flavoring spices in lentil or pea soups. Sometimes they are also used in brewing or for making tea.
From an ecological point of view, its abundant flowering provides food for the pollinators.

Preparation Method –
Leonurus cardia, in addition to having a beautiful appearance and therefore cultivable for ornamental use, can be used as a useful remedy as a relaxing, anxiolytic, to calm the heart in case of tachycardia, to reduce the sense of agitation that can accompany menopause in women. It has virtually no side effects and is normally well tolerated.
If you have the fresh plant available (the harvest of the flowering plant usually takes place between the end of June and mid-August) you can prepare a mother tincture or use it directly in herbal tea. In the first case, we will simply need water and 95 ° ethyl alcohol (found in supermarkets).
The method of preparation is as follows:
– the tops of the plants are cut up to where the stem is more tender (generally the apical 15-20 cm), thus you will have both the leaves and the flowers as well as part of the stems;
– shred what has been collected as finely as possible, with the help of a pair of scissors;
– the grass thus collected and prepared is weighed. For every 100g of fresh grass (which will contain approximately 70-80% water), a 60% vol. Hydroalcoholic mixture must be prepared. combining 120 ml of alcohol more or less and 20-30 ml of water for a total of about 200-250 ml at the time of squeezing. The measurements are not precise because the precise amount of water contained in the fresh grass should be calculated, but given the small portions we are talking about, we can rely on approximate measurements;
– the herb and the prepared hydroalcoholic solution will be placed in a hermetically sealed glass container and shaken daily for a period of at least one month or more;
– when we evaluate that the extraction time is over, the liquid will be filtered and the herb will be squeezed to obtain the mother tincture This preparation can be used in doses of 30-40 drops at a time to be diluted in half a glass of water, up to 3 times a day.
If, on the other hand, you want to prepare an herbal tea, use a generous spoonful of fresh (possibly dry) motherwort for a cup of water (approx. 250 ml). The water will be boiled, poured onto the grass in small pieces, then covered for 10-15 minutes, before filtering. The indications are the same as for the mother tincture and you can take up to 3 cups a day.