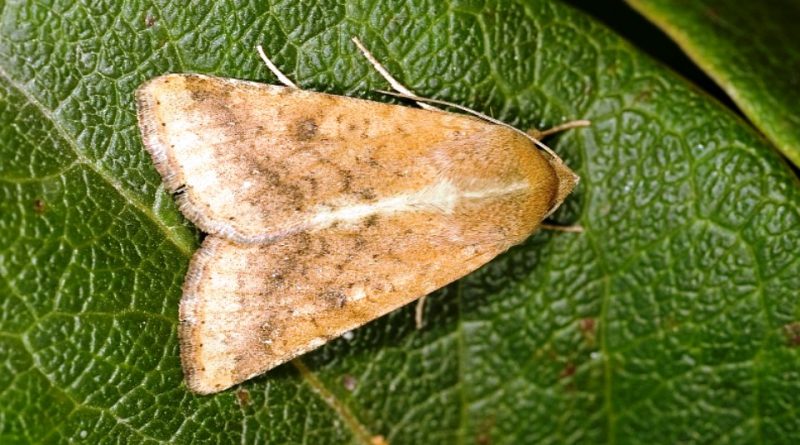 Geographic Distribution and Habitat –
Helicoverpa armigera is a very polyphagous moth, cosmopolitan even if it is more harmful in hot regions and whose larvae feed on a wide range of plants, including many important cultivated crops. It is one of the main pests of cotton and one of the most polyphagous and cosmopolitan pest species.
This species with the two subspecies: Helicoverpa armigera armigera and Helicoverpa armigera conferta carries out its biological cycle in a vast range from Australia and Oceania, with the first subspecies that invaded Brazil and from where it then spread largely of South America and reached the Caribbean.
This species is migratory, able to reach even northern territories.
It is a highly polyphagous species. The most important host plants are tomato, cotton, pea, chickpea, rice, sorghum and cowpea. Other hosts include peanuts, okra, peas, field beans, soybeans, alfalfa, Phaseolus spp., Other legumes, tobacco, potatoes, maize, flax, Dianthus, Rosa, Pelargonium, Chrysanthemum, Lavandula angustifolia, a number of fruit trees, forest trees and many horticultural crops.
For example, in Russia and neighboring countries, larvae populate more than 120 plant species, favoring the genera Solanum, Datura, Hyoscyamus, Atriplex and Amaranthus.

Morphology –
The cotton bollworm is recognized, at the adult stage, for having a wingspan of about 35 mm, with brown-ocher front wings with greenish hues: darker in the male, lighter and yellowish in the female.
Also on the front wings there is a brownish transverse streak.
The larvae have very variable colors ranging from yellow-pink, to greenish, to greyish brown with yellow-whitish side bands; when ripe they reach a length of about 40 mm.
The eggs are spherical and from 0.4 to 0.6 in diameter and have a ribbed surface; they are white and then turn greenish.

Attitude and Life Cycle –
Helicoverpa armigera is a butterfly that overwinters in the ground at the chrysalis stage.
The adults flicker in the period of full spring, in the month of May, and after having mated they lay eggs on the apical buds, on the flowers or on the fruits; the deposition takes place with several hundreds of eggs, distributed on various parts of the plant. Under favorable conditions, the eggs can hatch and become larvae within three days, and the entire life cycle can be completed in just over a month.
The damage, caused by the newborn larvae, occurs on the leaves, on the flowers but above all on the fruits; it is caused by the larvae which attack all the aerial organs of the plant. The larva causes atypical erosions on the leaves and flowers; on the fruits (as in the tomato) it digs tunnels in the pulp, passing from one fruit to another, also causing serious damage.
In a year it completes from 2 to 3-4 generations.
The larvae are quite aggressive, occasionally carnivorous, and can even cannibalize each other. If disturbed, they fall off the plant and curl up on the ground.
Pupae develop within a silk cocoon for 10-15 days in the soil to a depth of 4-10 centimeters or in cotton bolls or ears of corn.
This moth is a species with migratory habits, like many others.

Ecological Role –
The cotton bollworm, in the case of large populations, can cause particular damage to some crops such as: cotton, tomatoes, corn, chickpeas, alfalfa and tobacco. In cotton crops, flowers that have been attacked can open prematurely and remain fruitless. When the capsules are damaged, some will fall off and others will not produce or produce lower quality cotton. Secondary fungal and bacterial infections are common and can lead to fruit decay. Injury to the growing tips of plants can disrupt their development, maturity can be delayed and fruit can fall off.
Up to now the fight against this moth has been of a chemical type and has followed the criteria of the guided and integrated fight. Direct interventions are performed promptly, at the first attacks, following the flight of adults. The fighting technique involves the installation of funnel-shaped (eg Mastrap) or net sex traps; the traps must be installed in the period of late April-May, depending on the climatic environments, with the density of one trap per room. This monitoring is important to establish the moments at risk and the size of the population. The more timely the intervention, that is, the more it is at the beginning of the hatching of the eggs, the better the results will be. It is also possible to activate biological control interventions using Bacillus thuringiensis ssp. kurstaki.
Other control measures include the cultivation of resistant varieties, weeding, inter-row cultivation, removal of crop residues, deep autumn plowing, winter irrigation to destroy pupae, the use of insecticides or biological control through the release of entomophages such as Trichogramma spp. and Habrobracon hebetor.
To these, in recent times, have been added or integrated techniques of organization of agroecological crops (increase of associations, rotation, biodiversity, etc.).