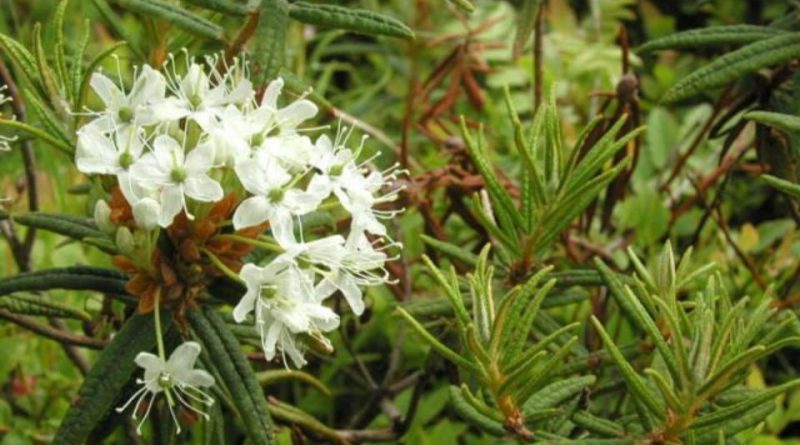 Etymology –
The term Rhododendron comes from the Greek ῥόδον rhódon rosa and from δένδρον déndron tree: due to the color of the flowers of many species of this genus.
The specific epithet tomento sum comes from toméntum peluria: covered with down.

Geographic Distribution and Habitat –
Marsh Labrador tea is a plant widespread in the northern hemisphere where it grows in North America, Greenland, Canada and Alaska, in Europe in the northern and central parts and in Asia from south to north of China, Korea and Japan.
Its habitat is that of peaty non-calcareous soils, shrub areas, mosses and lichen tundra at altitudes up to 1,800 meters. 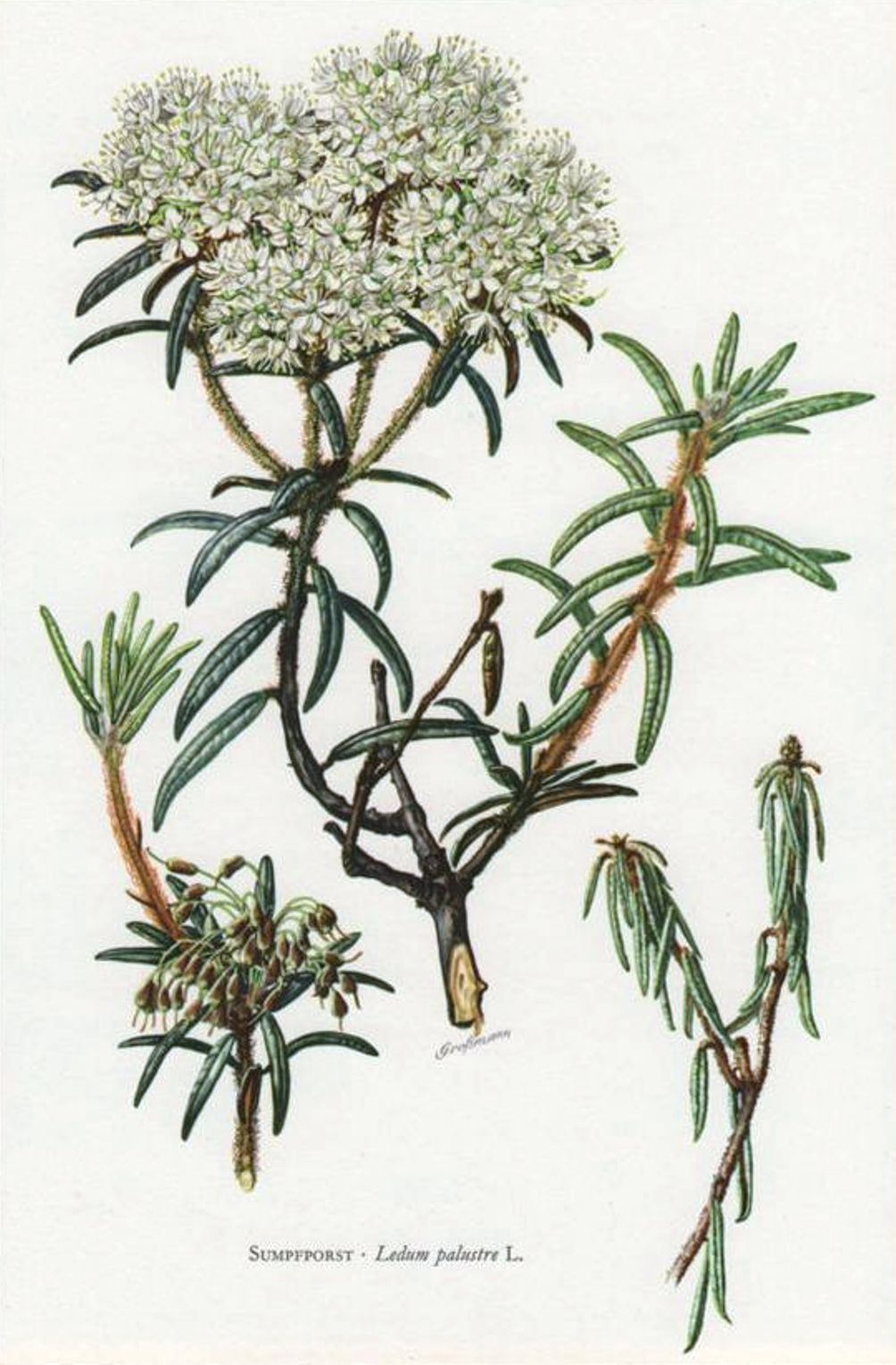 Description –
Marsh Labrador tea is a low shrub that grows up to 50 cm (rarely up to 120 cm).
The stems are creeping or prostrate and develop from a rhizomatous root system.
It has evergreen, leathery, lanceolate leaves, 12-50 mm long and 2-12 mm wide and rolled up at the edges.
The flowers are small, with a white five-lobed corolla, and produce several together in a corymb of 3-5 cm in diameter. These emit a strong odor to attract bees and other pollinating insects.
The flowering period is from May to July.
The fruits are indehiscent capsules.

Cultivation –
Rhododendron tomentosum is an evergreen shrub that is harvested in nature for local use as a food, medicine, and source of materials.
The plant is also grown as an ornamental species in gardens.
It is a moderately cold hardy plant, able to tolerate temperatures down to around -15 ° C when fully dormant. Although they tolerate cold when dormant, the flowers and young seedlings are highly susceptible to damage from late frosts in regions where they are likely to occur after the first few days of spring.
This plant requires a non-calcareous and peaty substrate with an acid pH rich in humus humus and in a shady or semi-shady position. To have a greater flowering they must be placed in a more sunny position.
Plants grow best if they have certain fungal associations in the soil. The best way to provide this is to incorporate some soil from well established plants into the soil for the new plant.
Propagation can be done by seed with surface sowing in a shaded greenhouse area at the end of winter or early spring. According to some, the seed is best sown in autumn as soon as it is ripe.
Germination is variable and can be quite slow. The transplant should be done when the seedlings are large enough to be handled.
Plants benefit from removing dead flowers before they set seeds; this prevents them from wasting too much energy on seed production at the expense of more flowers and leaves.
It can be propagated by woody cuttings of 5 – 8 cm in mid-summer. The transplant must always be done in spring and the rooting percentage is fair.
Cuttings of mature wood can also be prepared in late autumn or even by dividing the tufts.

Customs and Traditions –
Rhododendron tomentosum is a plant that grows naturally in North America, where the species is called “Marsh Labrador Tea”, “Northern Labrador Tea” or “Wild Rosemary”.
It is a plant that has both food and medicinal uses. This plant gives off a peculiar smell due to the essential oils it contains.
The leaves contain tannins and are aromatic and the whole plant contains a narcotic toxin called Ledol, a sesquiterpene that can cause cramps, paralysis and delirium. Ledol is also said to have various beneficial effects when consumed in the right dosage and it is said that, if ingested as an herbal tea, it only causes problems if the leaves are cooked for a long time in a closed container.
The leaves are very aromatic and, when crushed, have a strong hop smell.
The flowers contain an oil that has a strong antiseptic smell.
From the aromatic leaves a tea is obtained but a certain caution is advised, as described regarding the toxicity of the plant. It would be better to prepare the tea in cold water by leaving it in a sunny place, or to have it infused for a short time only in an open container.
The leaves are used as a flavoring and are a substitute for laurel.
The plant has been used as a substitute for hops in brewing, although this has caused an unpleasant form of drunkenness accompanied by headaches and dizziness.
For medicinal use, some caution is advised for toxicity notes.
The leaves and young flowering shoots are astringent, diaphoretic, disinfectant, diuretic, laxative, pectoral, stomachic and tonic.
From the whole plant, dried and pulverized, a homeopathic remedy is obtained. This is used in the treatment of stings, injuries and joint pains and is also used in the treatment of various chest ailments, asthma, menstrual pain etc.
Among others, it should be remembered that it is a good plant for pollinating insects.
The leaves are hung in the clothes closet to repel insects and the branches are also placed among the wheat to keep mice away.
A strong decoction of the leaves is used to kill lice and insects.

Preparation Method –
Marsh Labrador tea is a plant that is used in herbal medicine to make herbal teas. It is also used in homeopathy even if no objective material benefit has ever been documented to date in any adequately controlled study.
The plant was used in the Middle Ages in the production of beer. Due to its strong fragrance, it has also been used in the past as a natural deterrent against clothes moths, even mosquitoes and insects in general, in some countries such as Scandinavia.
The tea prepared with the leaves is taken in the treatment of asthma, cough, cold, stomach pain, kidney ailments, etc.
For external use it is used as a wash for burns, ulcers, stings, infections, etc.
Please note, regarding its toxicity, to use some caution as it is quite a narcotic and should not be used without the supervision of a doctor.