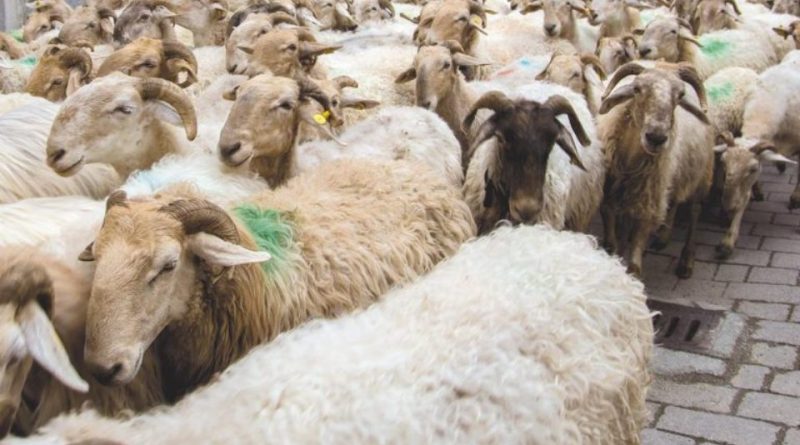 The Frabosana is an Italian sheep breed (Ovis aries Linnaeus, 1758) bred in Piedmont with an aptitude for milk production.

Geographic and Area Distribution –
The autochthonous Frabosana sheep breed also known as “Roaschina”, “di Roaschia” or “Rastela” is native to the valleys of the Cuneo area (Valli Monregalesi); it was once the most common dairy sheep breed in Piedmont. Raised in the provinces of Cuneo, Turin and Alessandria, it was gradually replaced with the Delle Langhe breed; nuclei of Frabosane in purity have been preserved only in the most inaccessible mountain areas.
It is raised in the Gesso Valley, in the Grana Valley, in the Pesio Valley, in the Vermenagna Valley and in the Monregalesi Valleys in the province of Cuneo, and in the Val Pellice in the province of Turin.
The Frabosana takes its name from the municipalities of Frabosa Soprana and Frabosa Sottana and was included in the breeds at risk by the Piedmont Region and obtained a registry in 1995 and a Consortium was established that adopted a trademark for the protection of its , meat and wool) in order to guarantee their origin.
At the beginning of May, in the municipality of Roaschia (CN), the exhibition of the Roaschina frabosana breed takes place, with the display of the best items and the tasting of its products.

Origins and History –
A few decades ago, the Frabosana sheep breed was the most widespread dairy sheep breed in Piedmont. It was raised in the provinces of Cuneo – in particular in the Monregalese valleys – Turin and Alessandria, until it was gradually abandoned: replaced by the Langhe sheep or crossed with breeds more suitable for meat production, such as the Biellese.
Two types are recognized within the breed, the Roaschina in the Ligurian Alps, and the slightly smaller Frabosana bred in the Mondovì area. The Frabosana is one of forty-two local indigenous sheep breeds with limited distribution for which a herd book is kept by the National Association of Pastoralism.
From an initial consistency of 16-17,000 heads, following the rapid decline suffered, there are currently about 6,700 heads distributed in 90 farms. The lower tendency to twin and lower milk production were the main reasons for the gradual replacement of the Frabosane sheep with those of the Langhe, especially in the Alta Langa area where, once upon a time, the former prospered for their marked rusticity and resistance. Another cause of the decline was the crossing with breeds with a prevalent aptitude for meat such as the Biellese, practiced to improve the growth rate of lambs.
The rusticity has allowed it to make the most of the stony pastures and to adapt to the marginal areas of the most inaccessible mountain areas, where some nuclei in purity have survived.
The conservation status of the Frabosana breed was indicated as “not at risk” by FAO in 2007 but in 2013 the total numbers for the breed were 4284 heads.

Morphology –
The Frabosana is a medium-sized sheep, with a heavy head, a distinctly ram profile in both sexes.
Males have a height at the withers of 80-90 cm and females of 75-80 cm, for an average weight of 75-85 kg for males and 60-65 kg for females.
This breed has characteristic flattened and curved horns, coiled in the males and turned backwards in the females; small to medium ears carried low and out.
The neck is of medium length, well attached to the head and trunk.
The trunk is long, with longitudinal diameters prevailing on the transversal ones.
The limbs are rather long and light.
The fleece is straw-white or very light brown in color, with open conical and coarse tufts that leave the head, abdomen and limbs uncovered.
As for skin and pigmentation, fawn-colored spots on the nose and limbs are frequent.