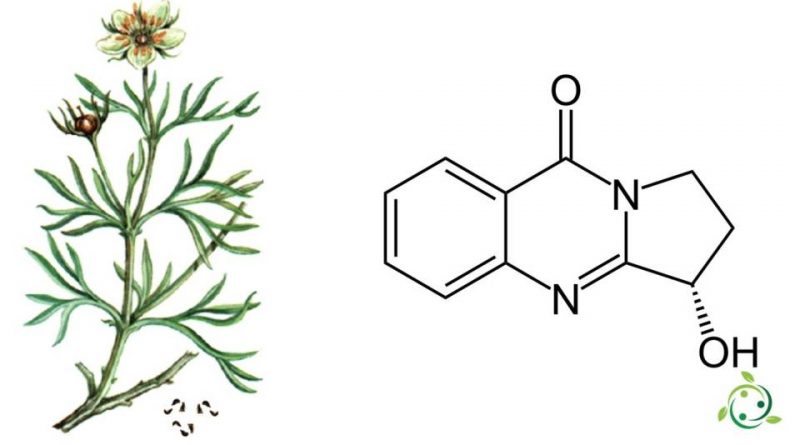 Vasicinone, whose official name in the IUPAC nomenclature is: (1S) -1-hydroxy-2,3-dihydropyrrole [2,1-b] quinazolin-5 (1H) -one is a brute or molecular formula quinazoline alkaloid : C11H10N2O2.
Vasicinone occurs naturally in the Syrian rue plant native to the eastern region of India. This plant also grows in the United States as an invasive plant in Arizona, California, Montana, New Mexico, Nevada, Oregon, Texas, and Washington. It is rarely found in Italy in Puglia and Sardinia. It can also be found in the arid regions of North Africa and Asia.
Vasicinone exhibits bronchodilatory activity in vitro and bronchoconstrictor activity in vivo. Furthermore, it has been shown that vasicinone has an anti-anaphylactic action.

Studies have been carried out in relation to the joint effects between vasicinone and the related alkaloid vasicin.
Both alkaloids in combination (in a 1: 1 proportion) showed pronounced bronchodilator activity, both in vivo and in vitro. Both alkaloids are also respiratory stimulants.
Vasicine is known to have a cardiodepressive effect, while vasicinone is a weak cardiac stimulant; the effect can be normalized by combining the alkaloids.