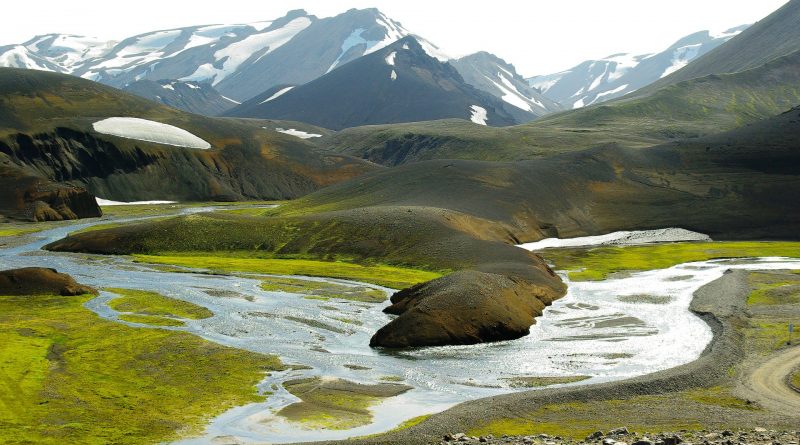 Precipitation is infrequent throughout the year and is determined by the influence of the Gulf Stream; from autumn to spring the precipitations are snowy. They are scarce, on desert values ​​between 100 and 250 mm, while there are frequent wind storms that raise the snow in the air give rise to the so-called Blizzard.
Winter temperatures generally always drop below 0, even down to -30 / -40. In the summer they slightly exceed 0, reaching up to +10 degrees in the hottest month.
The presence of snowdrifts and glaciers accumulated over the years with the current rise in temperature are melting more and more, also causing sea level rise.
Flora and fauna –
In the subarctic climate, plant life is reduced to a minimum by adapting to the short summer season, which guarantees a lot of light for a certain period, thanks to the sun that never sets near the summer solstice. The vegetation is that of the tundra where to predominate are: mosses, lichens, shrubs such as blueberries, willows, poplars, larches and birches which, however, due to low temperatures grow in a reduced size. Characteristic of the tundra is the permafrost, a layer of the ground completely frozen thus limiting the development of vegetation.
In general we must say that the animal species that manage to survive in the tundra, concentrate the main reproduction activities during the very short summer. Reproductive cycles are particularly rapid and development is fast. These include: rodents, snowy owl, reindeer, hare, polar fox and polar bear.