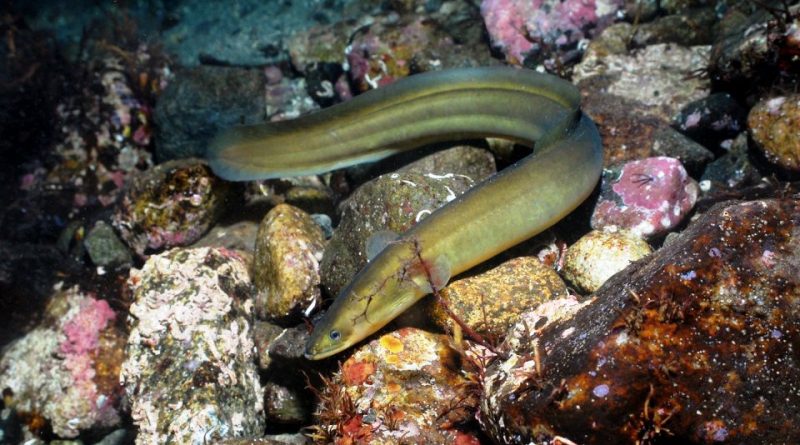 The European eel (Anguilla anguilla Linnaeus, 1758) is a teleost fish belonging to the Anguillidae family.

Geographic Distribution and Habitat –
The Eel is a fish found in the fresh, brackish and marine waters of the Atlantic and the Mediterranean Sea and its tributaries, from Iceland to Senegal. This species is less common in the Black Sea and its tributaries (including the Danube).
Its habitat is that of weak or absent current waters, but it cannot be excluded that it can also be found in very rough waters. The males often stay in brackish waters, without going up the rivers as the females regularly do.
It lives in the shelter of light, often buried in muddy areas and limits its activity to the night. It is found practically in all aquatic areas. In Sicily it was kept in water wells to keep unwanted invertebrates away.

Description –
The Anguilla anguilla is a fish typically with an elongated sub-cylindrical body in the front and central part and laterally compressed in the tail region.
The mouth has a prominent jaw, wide and equipped with small teeth on the jaws and on the vomer. The gill opening, just ahead of the pectoral, is slit-shaped.
The lateral line is evident along the center of the hips. The scales are very small and included in the dermis.
The eye is small, except in sexual maturity where it becomes larger.
The dorsal fin joins the anal fin, creating a false caudal. Pectoral fins developed and rounded, ventral fins absent.
The very slimy skin is covered with an abundant mucous secretion.
This fish has an olive or yellowish brown color, with an off-white belly. In mature specimens the dorsal part takes on a black tint, which contrasts with the silvery white belly.
In some Italian regions the large female (up to one and a half meters long) is called capitone while the male, much smaller (40-60 cm), is called buratello.

Biology –
The eel is a catadromous migratory fish (which descends the current), and its reproductive cycle, extraordinarily complex, has been known for a relatively short time. All eels are born in the Sargasso Sea, a well-known place where the reproduction of this species takes place.
The newly hatched larvae resemble small transparent leaves and begin their return migration, which takes about two years, before reaching their final shape. In the first year they are all around 30 cm. Adult males reach up to one meter and females 1.50 m and over 5 kg in weight.
At the end of the growth the freshwater eels change livery and migrate towards the sea (in the Atlantic in an area between Bermuda and the Sargasso Sea where in a depth of about 1.000 m. The reproduction takes place).
Once in the sea, they undergo considerable variations such as the increase in size of the eyes (it is assumed that the migration takes place at great depths, where the light is scarce) and the degeneration of the digestive system (the migrating eel stops feeding). Through little known itineraries these fish, which are certainly not strong swimmers, reach the area of ​​the Atlantic Ocean where the spawning takes place, after which they die.
The migration of sexually mature specimens starts from the fresh or brackish waters where these fish reside, in the fall. The reproductive instinct is so strong that eels living in closed lakes or ponds do not hesitate to get out of the water and to reach the river or the sea crawling like snakes; this occurs during the night, especially in rainy conditions or in grass wet by the night dew (which allows the migrating fish to avoid dehydration) and in the absence of the moon (given the lucifuge character of the species).

Ecological Role –
Eels eat anything and feed on both living and dead animals; from insects, to fish, amphibians, worms, crustaceans. They are the object of special fishing in the brackish lagoons and in the Veneto and Comacchio valleys and they bite all lines.
It is hunted at night or when the water is very cloudy, even in flood conditions, relying mainly on the sense of smell.
The capture, normally, takes place with various types of nets, pots and lines, including the “mazzacchera”, an ancient method of fishing with a type of line without hook triggered with a “crown” of earthworms. The line is then tied to a rod, balanced on a fork, and placed on the bottom with a lead that keeps the line in slight tension, so as to reveal the bites of the eel. With a little experience you can raise the line with the eel attached to earthworms and bring it out of the water, perhaps in an overturned waxed umbrella. Another method practiced by fishermen consists in laying on the bottom of bundles, in which the eels take refuge. By hauling them carefully and without jolts you can catch the eels that have entered them.
The eel is a fish whose larger specimens (females) are highly appreciated in the kitchen and are usually sold alive, in special tanks filled with fresh water. The eel is typically destined for Christmas consumption even if in regions such as Sardinia it is consumed at any time of the year (when available). Generally prepared roast for the larger specimens, stewed, or even fried for the smaller specimens. Leftovers are usually recycled the next day after marinating them in vinegar flavored with oregano, bay leaf, garlic and pepper. It is a very fatty dish (about 24 g of fat per 100 g of fresh product). Outside the Christmas tradition, grilled preparation is preferred which, allowing the excess fat to flow, guarantees a higher digestibility. A typical and very tasty dish is pasta on eel. The pasta is seasoned with stewed and filleted eel, tossed for a few minutes in this sauce.
The meat of this fish is very fatty and it must be remembered that their blood is, in fact, toxic: it contains a toxic protein, the hemoichthyotoxin, which in contact with human blood (e.g. that deriving from a wound or a cut ), has a haemolytic action. The toxin is thermolabile, and is neutralized by heat.
It is bred in various parts of EUorpa and in Italy, among the largest farms are those of the Comacchio Valleys, the Orbetello Lagoon, Cagnano Varano and Lesina.
From an ecological point of view, according to the IUCN Red List, the eel is registered as “Critically Endangered” and therefore close to extinction in the wild. The main causes of the rarefaction do not lie in pollution (to which the eel is not very sensitive) but in excessive fishing effort, both by adults and juveniles for the purpose of restocking the fishing valleys.
Today their fishing is prohibited for ecological reasons but for centuries they have been laboriously fished in the cold nights between Christmas and Carnival with the typical ripaiola and simply cooked with garlic and sage.