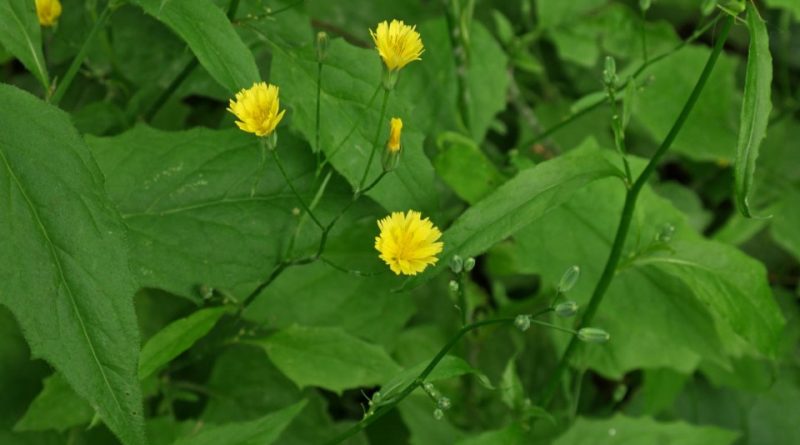 The Common nipplewort (Lapsana communis L., 1753) is a herbaceous species belonging to the Asteraceae family.

Etymology –
The term Lapsana comes from lampsana / lapsana, an edible plant in Varro and Columella, from the Greek λᾰπάσσω lapásso empty, drain, evacuated, referring to purifying properties.
The specific epithet communis refers to the criterion of common, banal.

Geographic Distribution and Habitat –
Common nipplewort is a plant with a Paleotemperate – Eurasian origin. Its distribution range is relative to Europe and Asia; it is very common in Italy. In the Alps it is common everywhere. On the other European reliefs connected to the Alps it is present in the Vosges, Jura Massif, Central Massif, Pyrenees and Carpathians.
Its typical habitat is in the deciduous woods, in the vegetable gardens, in the cultivated fields and in the ruderal areas; but also in the edges of the woods, in the forest clearings and in the shrubs. The preferred substrate is both calcareous and siliceous with neutral pH, high nutritional values ​​of the soil which must be moderately humid.
It has an altitudinal distribution on the reliefs up to 1400 m s.l.m .; therefore they frequent the following vegetational levels: hilly, mountainous and partly the subalpine one (in addition to the plain one – at sea level). 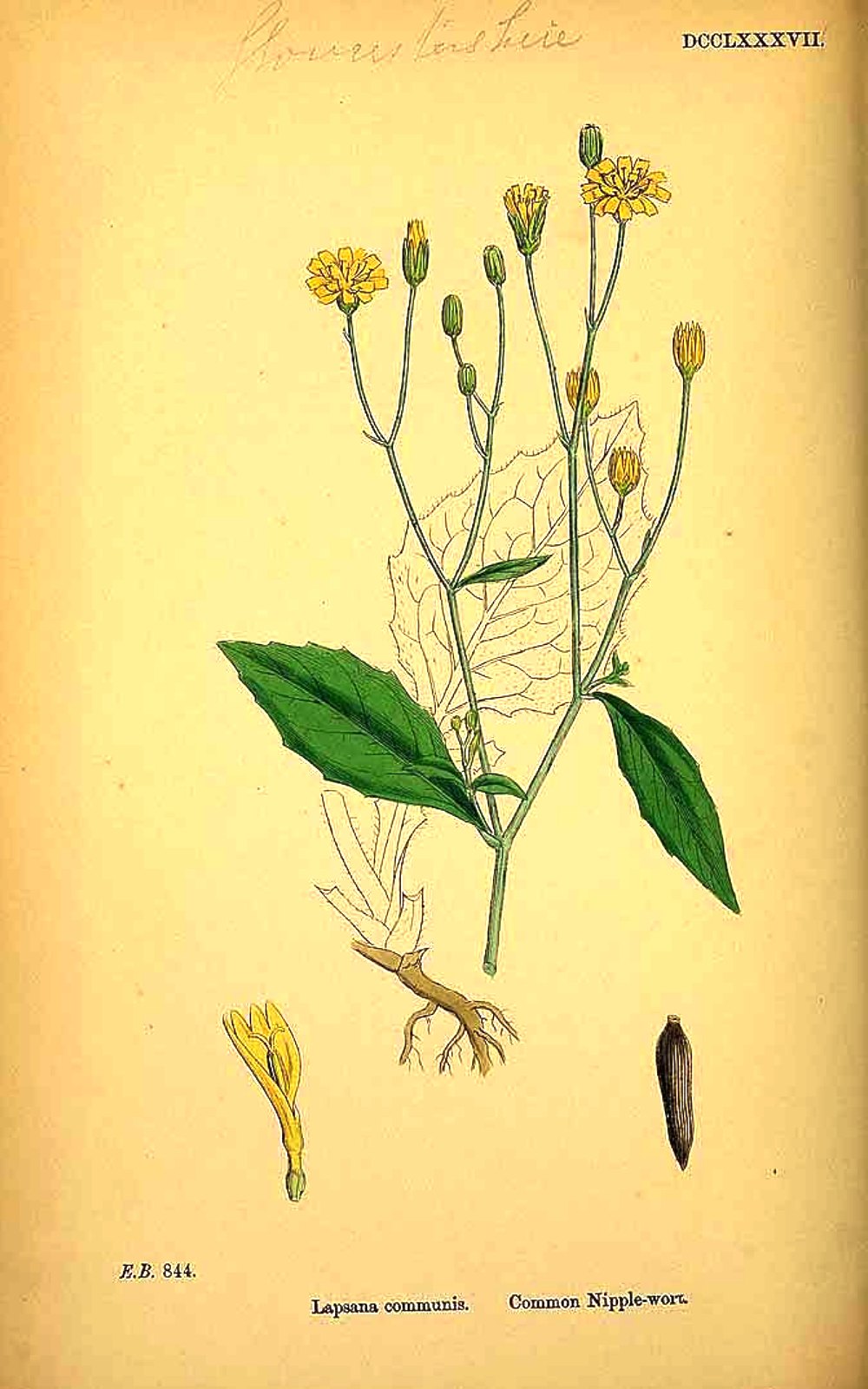 Description –
Lapsana communis is a 20 to 120 cm tall annual herbaceous plant containing a latex.
It has a tap root.
The stem is erect, branchy, often hairy corymbose.
The lower leaves are petiolate with an oval, sinuous-toothed, sharp lamina. Those caulines are sessile.
It has a corymb inflorescence with numerous light yellow ligulate flower heads.
The flowering period is between May and October.
The fruits are curved achenes with about 20 longitudinal striae, without pappus.

Cultivation –
Lapsana communis is a plant that grows in its natural state in vegetable gardens, in ruderal areas, in scrublands and coppice woods, species of broad-leaved trees.
In particular it prefers the edges of disturbed nitrophilous woods, near the hedges, in the gardens, more rarely in the cultivations, on loose and fresh clayey soils, humiferous and rich in nitrogen compounds, from sea level to the mountain belt.
This plant is harvested in nature for local use as a food.
It was once grown as a vegetable while nowadays it is practically no longer cultivated. However, for its cultivation we recommend soils with pH that are not too acidic and not in a shady area.
Propagation takes place by seed which must be sown in the open field in the spring period. However, plants usually self-sow themselves when they are well positioned.

Customs and Traditions –
Common nipplewort is a plant that is used both as a food and medicinal use.
The young leaves are edible. The doctrine of signs, based on the similarity between closed flower heads and teats, led to believe that the plant could cure the inflammation of the nipples of women from milk engorgement after weaning, hence the old common name of ‘ breasts’.
It has purifying, emollient, refreshing and antidiabetic properties.
The young leaves (or even the sprouts) can be eaten as a salad, or cooked like spinach, or added to soups and flans.

Preparation Method –
The young leaves of Lapsana communis are edible, with a bitter or radish-like flavor, and can be eaten raw in salads or cooked like spinach, mixed with other vegetables or added to soups and flans.
It is advisable to harvest them before the plant blooms.