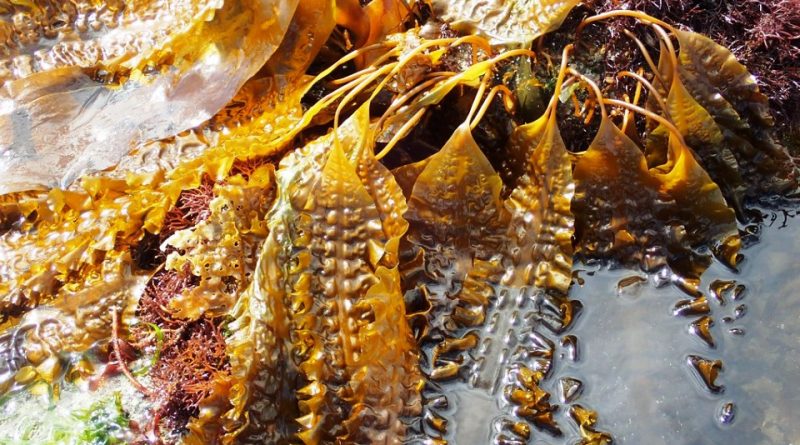 Etymology –
The term Saccharina comes from the Greek σάκχἄρ, -αρος sácchar, -aros sugar (from the Sanskrit sarkara, originally grains of sand): sugary, with a sweet taste.
The specific epithet latissima is the superlative of broad, extended, broad latus: for very wide laminae.

Geographic Distribution and Habitat –
Saccharina latissima is a brown algae native to Japan and the Asian seas in general, but now it is possible to find many crops, especially in Brittany.
In nature it is found in the northeastern Atlantic Ocean, the Pacific Ocean and the Barents Sea south of Galicia in Spain. It is not found in the Bay of Biscay but is common along the coasts of the British Isles.
Its habitat is that of sheltered rocky bottoms at a maximum depth, normally, of 25 meters. 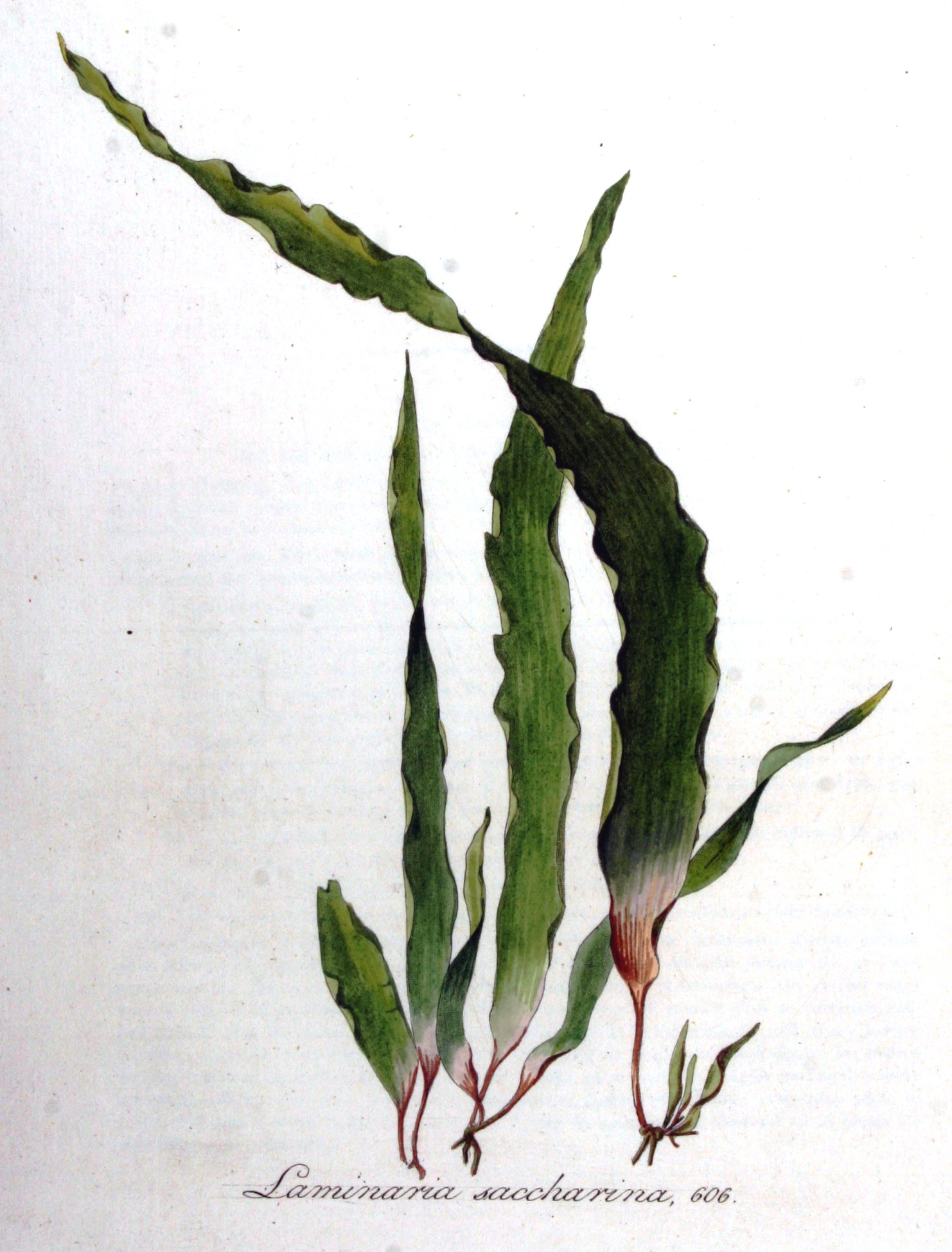 Description –
Saccharina latissima is a yellowish brown seaweed with a long and narrow blade that can grow up to 5 meters in length and 20 centimeters in width.
The central band is crinkled while the margins are smoother with a wavy edge.
The frond is attached to the rock by robust rhizoids of about 5 mm in diameter, in the intertidal and sublittoral zones by means of a claw-shaped clip and a short, flexible and cylindrical stem.

Cultivation –
Saccharina latissima grows in water and it is easy to find large concentrations during low tide, especially in the cold waters of the Atlantic Ocean: Brittany, Ireland, England, but also colder coasts such as Russia and Iceland. This makes the seaweed particularly resistant and the concentration of nutrients within it is very large: iodine, mineral salts, fibers are just some of the most important and most useful to our body.
In the Mediterranean it is almost non-existent, with the exception of some areas in the Strait of Messina.
It lives at a maximum depth of 25 meters, therefore relatively low, and tends to form immense expanses, which, given the characteristic length of the fronds, are also defined as underwater forests.
Real crops or farms do not exist. For restocking, parts of laminaria previously collected with all the rhizoid are thrown into the sea. Obviously the area chosen for regrowth must not be immediately exploited for harvesting otherwise there will be no replacement but only impoverishment.
Harvesting, which takes place throughout the year, takes place by hand in the coastal areas, when the tide recedes and brings the plants to light, or by collecting them directly from the beaches after the intense storms. In this second case, however, care must be taken that they have not been detached because they are now dead, and then they must be discarded, or because they are actually torn by the impetus of the waves, which means that they are usable.
Another technique, unfortunately destructive, is to collect from the bottom of the sea through special nets that rub on the rocks, indiscriminately tearing the seaweed. This technique causes the impoverishment of this alga.
In recent times, attempts are being made to cultivate with increasingly sophisticated techniques in various parts of the world, up to Greenland.

Customs and Traditions –
Saccharina latissima is an algae known on average in the food world, especially by those attracted to the oriental diet. In many Japanese restaurants, for example, this seaweed is used for many dishes, such as soups and broths. sugar kelp seaweed can also be used for cooking rice which is then used for Sushi. Together with the Laminaria Digitata it is called by the term sugar kelp.
Both of these algae have broadly the same properties and the same organic composition.
The sugar kelp seaweed, as mentioned, grows in the sea and from the sea it acquires mineral salts that are added to and vitamins A, B1, B2 and C. This is also the cause of the characteristic sea flavor of these algae, a flavor that we are get used to hearing only in fish dishes. This concentration of nutrients causes our body to benefit from them on the immune level. The defenses of our body are helped by vitamins and iodine, present in very high quantities. Vitamin C is one of the most suitable vitamins for the body’s defenses, as it is also a purifying vitamin (it helps eliminate excess free radicals).
This alga promotes blood circulation and blood pressure thanks to its nutraceuticals that promote vasodilation without side effects. The numerous mineral salts, in addition to giving it that characteristic flavor, also have an alkalizing effect. It also stimulates the metabolism, so it keeps our body in “training”. A high metabolism helps the absorption of nutrients and also assists digestion, especially from a circulatory point of view. Some of its elements are also very important for the walls of the blood vessels themselves, which use those elements to strengthen their structure.
The antioxidant substances contained in this alga help prevent the formation of free radicals within our body. Free radicals are a phenomenon that is part of the cell cycle and cannot (and must not) be eliminated. Sometimes external conditions such as stress, smoking, pollution, can lead to an increase in the formation of these free radicals. Sugar kelp seaweed helps eliminate those in excess. Furthermore, as mentioned before, Laminaria has the characteristic of being alkalizing, so it helps to keep the pH of our body at a normal level, neither too acidic nor too basic. Lemon does a similar function, for example, and is one of the reasons why lemon is often associated with diets and diets rich in vegetables.
A more particular feature of the detoxification aspect of sugar kelp is that which concerns the intestines and kidneys. Inside it has an acid called alginic acid which is a substance that cannot be metabolized by our body. However, this substance is very useful for purifying the intestine. In addition, nutrients such as vitamin B12, folic acid, phosphorus, potassium and iodine (present in very high concentrations in Laminaria) help improve kidney activity and consequently, as already seen, blood pressure.
Numerous researches have shown that sugar kelp seaweed can help fight obesity and is a food particularly suitable for patients suffering from diabetes, for example by having an inhibitory effect in the intake of triglycerides.
From a food point of view, it is normally found dried, to maintain these extraordinary properties: just boil it for a while to bring it back to its original state and you can use the water where it is heated as a broth or to prepare a risotto.
As for ecology, Saccharina latissima forms ecologically important ecosystems. It is a primary producer, supplying plant material to the coastal food web. These formations, comparable to marine forests, also act as habitats for animals, resulting in a high biodiversity. Fish, crustaceans and other animals find food and hiding places within these forests.
In 2004, scientists unfortunately reported a loss of Saccharina latissima up to 80% in Skagerrak (a natural channel located between Jutland, Denmark, and Norway and part of the North Sea) and 40% on the west coast of the Norway.
The reasons for this loss are not fully understood, but rising ocean temperatures, high nutrient levels, and a reduction in animal species that feed on the filamentous algae are suggested as the most likely reasons.

Preparation Method –
All the seaweed is used from the Saccharina latissima, both the stem and the frond.
One of the simplest ways to preserve the properties of algae is drying, which has also taken place naturally for millennia and once rehydrated foods recover most of the properties they had before the exclusion of liquids. Sugar kelp seaweed is readily available on the market dried and easy to transport (a dried food weighs up to 10 times less).