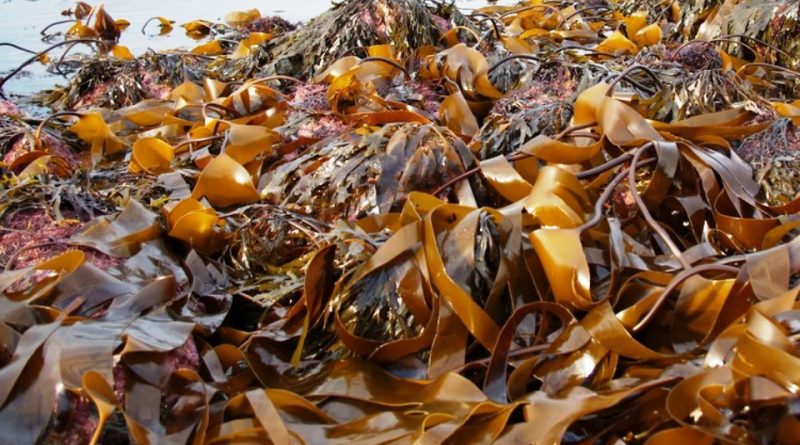 Etymology –
The term Laminaria comes from the Latin Laminaria, derived from lamĭna ‘lamina’, due to its appearance.
The specific epithet typed comes from dígitus finger: with parts that look like fingers.

Geographic Distribution and Habitat –
Laminaria digitata is a large brown alga found in the sublittoral zone of the northwestern Atlantic Ocean, from Greenland in the south to Cape Cod and in the north-eastern Atlantic from northern Russia and Iceland in the south to France. It is common along the coasts of the British Isles, with the exception of much of the east coast of England.
Its habitat is mainly that of exposed sites on the coasts of the low coast where it can form extensive grasslands and can be the dominant algal species. It has a rather high intrinsic growth rate compared to other algae, 5.5% per day, and a carrying capacity of about 40 kg of wet weight per square meter. It can reach lengths of about 4 m. It overlaps to a small extent with the distribution with Fucus serratus and Alaria esculenta. Among other species it is very susceptible to grazing by sea urchins. It has low and high light limiting values ​​of around 5 and 70 W per square meter respectively. Its distribution is also limited by salinity, exposure to waves, temperature, desiccation and general stress. 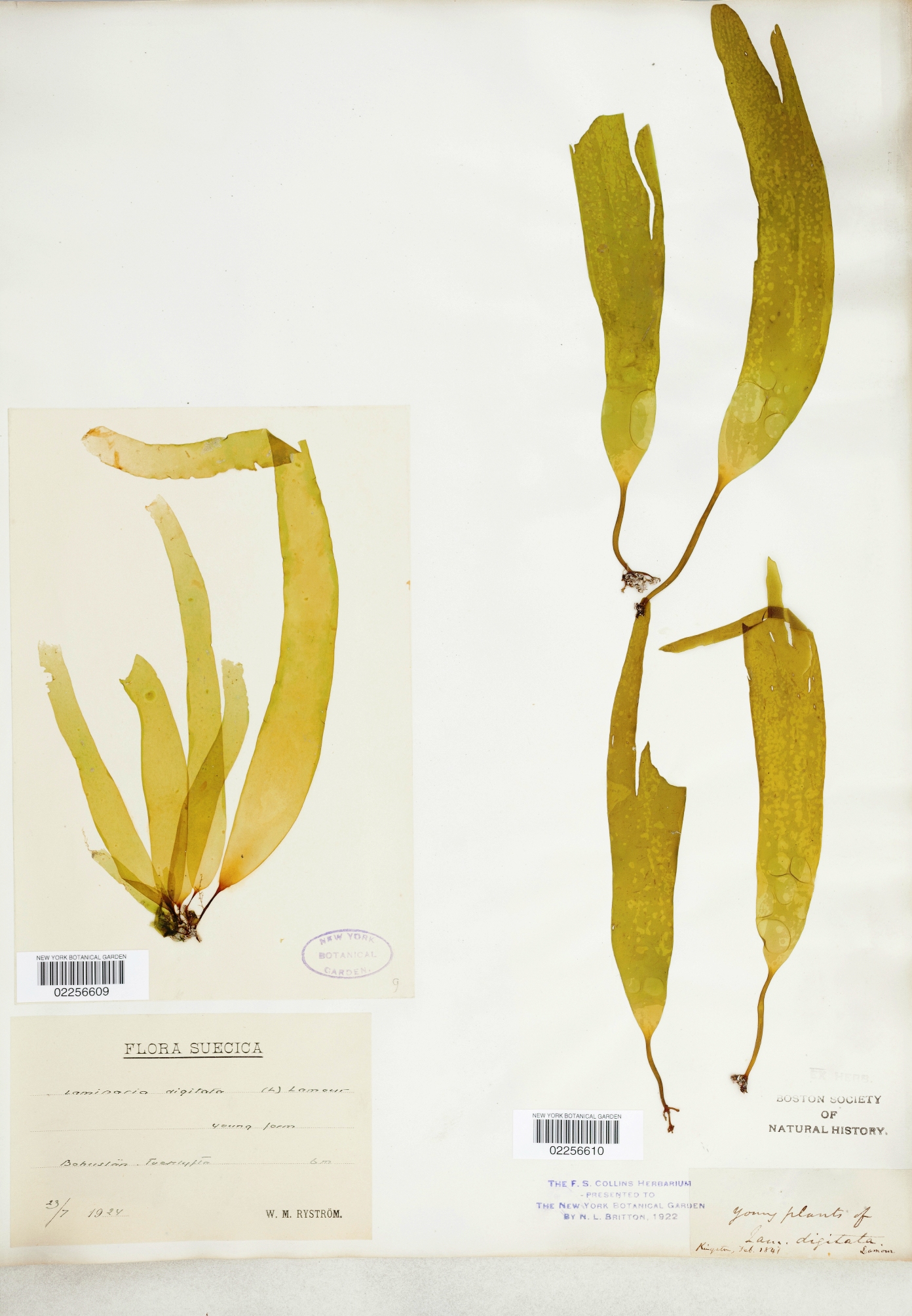 Description –
Laminaria digitata is a consistent, leathery, dark brown alga that reaches two or three (four) meters.
The part that anchors it to the rock is conical and has a series of root-like projections called rhizoids.
The stem is flexible and oval in section and can be more than 2.5 cm in diameter and grow up to 30 cm in length.
The blade is large and palm-shaped with a number of more or less regular finger-like segments.
This alga can be distinguished from the rather similar Laminaria hyperborea by its darker color and shorter stem which does not break easily when bent.

Cultivation –
The life cycle of Laminaria digitata is that of large diploid sporophytes and microscopic gametophytes. The spores develop in sori that form above the central part of the blade.
This brown alga is widespread in cold ocean waters and particularly abounds along the shores of the North Sea and the North Atlantic as well as off the coast of France and Morocco for use in the production of alginic acid.
Here, after being harvested, by hand or through machinery operated by boats, it is dried and sent to industrial processing processes.
It is also used as an ingredient in some cosmetics.

Customs and Traditions –
Laminaria digitata was once traditionally used as a fertilizer and then spread on the ground. In the 18th century it was burned to extract the potash it contained for use in the glass industry. In the 19th century it was used for iodine extraction.
Historically, the dried stems of Laminaria digitata were used in traditional medicine as an abortion and to mechanically induce labor.
This alga is known and appreciated above all for its high content in mineral salts, in particular for the abundant presence of iodine. This mineral is essential for the proper functioning of the thyroid gland, consequently for the regulation of the body’s metabolism and the physical and intellectual development of the child.
Regular intake of herbal preparations based on Laminaria can help increase the body’s metabolism, helping to achieve a healthy weight.
However, it is important not to overdo the consumption of iodine as an excess is as harmful as a defect. For this reason, Laminaria and other iodine-rich algae are contraindicated for those suffering from hyperthyroidism and can cause, in sensitive subjects, undesirable effects such as hot flashes, palpitations and nervousness with difficulty falling asleep.
Laminaria is also rich in sodium; for this reason, during a treatment based on seaweed it is good practice to reduce the daily consumption of salt.
Algin can be extracted from laminaria, widely used as a gelling and emulsifying agent in the production of ice creams, fruit juices, jellies, etc.
The ability of alginates to absorb water makes Laminaria a suitable food to increase the sense of satiety and gives it mild laxative properties. In the medical field, this feature is instead exploited for the dilation of the uterine neck and urethra.

Preparation Method –
The part of the plant of Laminaria digitata is the thallus.
Typically, the prepared parts, usually the laminae of the thallus, are consumed immediately after boiling in broth or water, or consumed after drying.
In some Eastern countries it is transformed into a dessert known as laminaria jelly, in other countries it is also used in the form of fresh salad, which is also canned for delivery and sale in other regions.
Laminaria digitata, at the pharmaceutical level, is nowadays found in supplements in the form of powder or tablets based on dry extract, to be swallowed with water just before meals. A daily intake dose ranging from one to five grams is generally recommended.