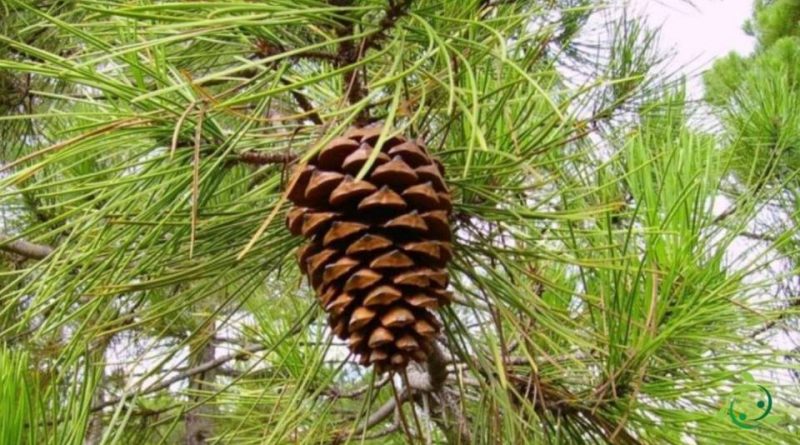 The maritime pine (Pinus pinaster Aiton, 1789) is an evergreen tree of the Pinaceae family native to the coastal areas from the Mediterranean to the Atlantic.
This plant forms woods on the sandy coasts of the western Mediterranean (Mediterranean-Atlantic), with a greater concentration in the Iberian Peninsula including the Portuguese coast and along the southwestern coast of France; for its cultivation it should be remembered that it is sensitive to frost and lives well where the winter temperature does not differ much from 6 ° C; it has however spread with artificial plants on the coastal dunes beyond its range of origin; it can form mixed woods with Pinus sylvestris, Quercus ilex or even with Pinus nigra; it has less need for climatic mildness and deep and humid soils compared to Pinus pinea.
In Italy, the species is doubtful indigenous and is therefore considered cryptogenic; its range includes the peninsular belt up to Tuscany and the island of Pantelleria; although in many environments it appears spontaneous, it was introduced in many places by man in historical age. We also find it in Liguria and Sardinia. It prefers hill stations or even low mountain stations over plains.
The reproductive structures are from the female inflorescences that generate typical conical and tapered pine cones of 15-20 cm and hazelnut color that ripen in the 2nd year; they are very woody in consistency and remain on the branches for a few years.

Cultivation –
The maritime pine is a plant that thrives well and thrives in bright, sunny places. It loves the mild climate and fears the cold of winter.
From the pedological point of view, it prefers siliceous soils even with an acid reaction even if it adapts to sub-alkaline or alkaline soils. In any case they must be soils with good drainage.
As for the irrigation supply, remember to provide regularly in young specimens while as the plant grows it is satisfied with rainwater and should be irrigated only in the case of particularly dry summer periods.
Before planting, which must be carried out immediately after the last cold winters, we also recommend a basic fertilization with humus or mature manure. for young plants it is then recommended to fertilize with slow release fertilizer. The adult plants, with their root system, then provide by themselves their water and nutritional balance.
The maritime pine reproduces by sowing in the nursery and sometimes by self-sowing in the open ground.
Finally, remember that Pinus pinaster does not require pruning. Only branches that are dry and damaged by the cold are pruned. Generally it should be thinned out from the internal branches both to promote sunshine and ventilation of the entire canopy and to prevent the appearance of diseases typical of conifers.

Uses –
Pinus pinaster is a forest essence of primary importance, it is used to consolidate sandy coasts. At one time it was also used for the production of the resin that flows from the incisions made on the trunk. The resin is obtained with a 10 × 3 cm incision on the trunk, where a sheet metal gutter is placed in order to let the resin pour into a container; every now and then the cut is cleaned up and lengthened by a few centimeters upwards, until it reaches even 3 m in height; at this point we proceed from another part of the trunk, leaving at least a strip of intact bark of more than 5 cm; turpentine, rosin (by distillation) and black pitch can be obtained from the pine resin.
Vegetable tar is obtained from the distillation of lower quality wood.

Silvicultural aspects –
Maritime pine is treated through a satin cut with natural or artificial renewal. Natural renewal can also be induced by burning the branches, which simulating the effect of a fire stimulate the germination of the seed. It is also possible to cut into strips of 30 – 40m and holes of 0.5 hectares. Thanks to its resistance it is often planted to protect the pine forests from marine aerosol.